Who are you, Wonder Woman?

These are the breathily sung words scrolling across the screen at the end of video artist Dara Birnbaum’s film “Technology/Transformation: Wonder Woman” (1978-79). The recently opened Birnbaum exhibit is part of the Saint Louis Art Museum’s New Media Series, which exhibits digital media installations by living artists that engage the audience through both film and sound.

In addition to “Technology/Transformation: Wonder Woman,” the installation includes Birnbaum’s film “Kiss the Girls: Make them Cry” (1979). Together, these two seminal pieces of video art explore gender representation and the underlying layers of meaning in 1970s popular culture. 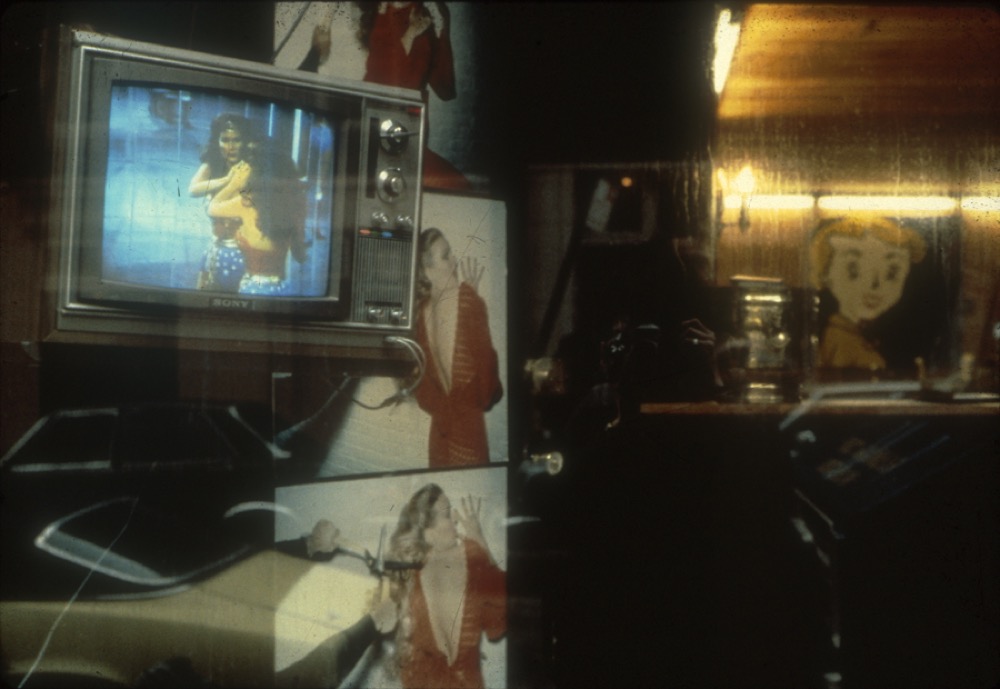 Stills from Dara Birnbaum’s films “Technology/Transformation: Wonder Woman” (1978-79), right, and “Kiss the Girls: Make them Cry,” center. An exhibit of Birnbaum’s work, left, recently opened as part of the Saint Louis Art Museum’s New Media Series, and will run until Dec. 11 in Gallery 301.

In “Technology/Transformation: Wonder Woman,” Birnbaum appropriates footage from the popular ‘70s television series “Wonder Woman” starring Lynda Carter. She reveals the coexistence of two conflicting representations of female characters: empowered and objectified. Birnbaum strips away the existing narrative of Wonder Woman, exposing and repeating the stereotypical moments using clips from the show: transforming from real to wonder, deflecting bullets off her golden cuffs, running through fields, escaping from a hall of mirrors and saving a male character, all in her patriotic strapless leotard and high-heeled boots.

If we consider the history of the Wonder Woman comic, we see an essentially inverse relationship to the development of women’s rights. In “Wonder Woman Unbound,” Tim Hanley writes that the comic was rooted in a feminist utopian vision. In the 1940s, William Moulton Marston created Wonder Woman to prepare the world for an imminent matriarchal triumph. Her origins in a pro-feminist comic are still present in the character portrayed by Carter on television in the ‘70s.

Without questioning the validity of Wonder Woman as a feminist icon, Birnbaum fragments and repeats the mechanisms that objectify her to a point of ironic ridicule. By isolating the near-comical special effects of her transformation (think: bright flashes of light that seem to explode out of Wonder Woman), Birnbaum uncovers conventional representations of femininity: Shy, ordinary Diana Prince becomes beautiful, strong Wonder Woman. This moment of self-transformation also perfectly exemplifies the irony: In her moment of taking agency—becoming an empowered woman, being the active subject—she is objectified and sexualized.

Birnbaum’s other work, “Kiss the Girls: Make them Cry,” takes a slightly different approach to the representation of women. Here, Birnbaum appropriates scenes from the television game show “Hollywood Squares.” The layout of the game show confines B-list celebrities to individual squares, which are, in turn, confined to a grid. Two contestants play tic-tac-toe by choosing where they want to place their X or their O. The celebrity in the square they choose must respond to a question posed by the host, to which the contestant can either agree or disagree.

Birnbaum strips away all sense of narrative, leaving the viewer with no context for the laughs, smiles, smirks, eye rolls, pouts, grimaces and salutes of the various stars. She is able to zero in on these different representations of gender and power dynamics, by repeating and decontextualizing their mundane self-presentations.

Within the context of the game show, the gestures are legible along gender stereotypes—the confident man’s salute, the insecure girl’s coy glances, the flirty woman’s giggle, the skeptical man’s raised eyebrows—but taken out of that environment they seem empty, contrived and somewhat irrational. By taking the regulated gestures of the women (and men) out of context, she highlights the “unreal” quality of the way they present themselves. The more times I watched this video, the more abstract and meaningless the gestures became. It’s also worth mentioning the lack of representation for women of color and queer and non-binary folks. Birnbaum cannot comment on the different forms of representation and objectification for diverse women because of their virtual nonexistence in popular culture at that time.

Interesting to note is the exchangeability that is afforded by the grid structure. Each square or image is as easy to swap out as the next, most likely to be filled by another woman with an equally regulated self-presentation. It also reflects the repetitive structure of Birnbaum’s editing: one image after the other, laid out in a formalized but easily adjustable sequence.

Birnbaum writes that the grid reminds her of a disco floor, with its use of “highly visual and manipulated lighting,” one of the reasons she chose to include disco music as the soundtrack. An especially ironic combination is Ashford & Simpson’s song “Found a Cure” that plays over repeated psychedelic zooms from small squares to full screen. This strange contrast highlights the implicit objectification of the women by removing them from their location as subject, while hammering in the rudimentary representation of “empowerment” through the enlarging of the image.

Through her exhibited works, Birnbaum’s pioneering use of appropriated television footage uncovers, illuminates and critiques the gendered images and actions present in ‘70s mass media. Her work forces the viewer to engage critically with the material and to reconsider its place and relevance in contemporary society.

SLAM’s New Media Series exhibit on Dara Birnbaum will be playing until Dec. 11 in Gallery 301 and is free of cost.