Danielle’s ARTicles: Brooding over ‘The Brood’

Last Friday, the seniors majoring in studio art at the Sam Fox School of Design & Visual Arts were granted a surprise afternoon field trip to the Contemporary Art Museum St. Louis (CAM) and received a tour of the current exhibition, “Lisa Yuskavage: The Brood.”

Bringing up questions of body image, morals, misogyny and the male gaze, Yuskavage’s paintings certainly succeed in forcing their viewers to “brood” over contemporary issues. While the female figures are cartoony, disproportionate and pleasure-seeking, they are tainted with the artist’s unmistakable classical technique and vibrant colors.

The lucidity of the colors that stain Yuskavage’s canvases are a major motif that scream contemporary in this collection, but they are uniquely paired with her formal trademark of using classical sources. The 53-year-old artist refers to Michelangelo, Raphael, Caravaggio, van Gogh, Pollock, Guston and more. Besides the Renaissance prototypes, which pop up in her small still lives of fruit baskets, details of rolling marbles and some figurative references, she also draws material from films. Specifically, “The Brood,” the exhibition title, was inspired by a David Cronenberg horror movie about mutated dwarf children.

Perhaps this explains the possessed faces and black, demonic eyes that haunt some of her babyish figures. Otherwise, most of Yuskavage’s females turn their gaze away from the viewer, hiding behind their disheveled ringlets or pin-straight strands of doll hairs, or covered by props. Their diffident stares only further objectify the rest of their bare bodies, and the juxtaposition of these subhuman heads on top of Yuskavage’s voluptuous figures is what makes these creatures seem so lewd and vulgar.

Senior Alex DeRosa was among the studio majors who visited CAM last week with her Capstone class. As a fan and supporter of feminist art, DeRosa was disappointed with Yuskavage’s work.

“It is a really fine line between empowering and just creating something that fits into the misogyny that is inherent in our culture, and I didn’t find [Yuskavage’s] paintings empowering at all,” DeRosa said. “Also, for argument’s sake, if they are feminist, which I don’t think they are, they only present one side—there was only one woman of color in the entire show—which presents a very outdated view of feminism.”

The painting titled “Brood,” from 2005-2006, sets the stage for the entire exhibition. Washed in a hazy light, a pregnant woman sits behind a white table that is strewn with flowers, polished pears and a bowl of berries. Her huge, protruding belly takes the shape of a gleaming piece of fruit, like an enlarged orange perched behind the other produce spread out on the table, and her breasts hang heavily in this pile of objectified body parts. The female is further dehumanized by the absence of her eyes and arms; her face is blurred by the shadow of her limp hair, and a white cloth outlines her shoulders and covers her arms. A white theater curtain is draped above her head and tied up to the right of the canvas, uncovering this ominous creature. The detail of a white handcuff around her wrist and a lollipop stick poking out of her mouth are especially unsettling. 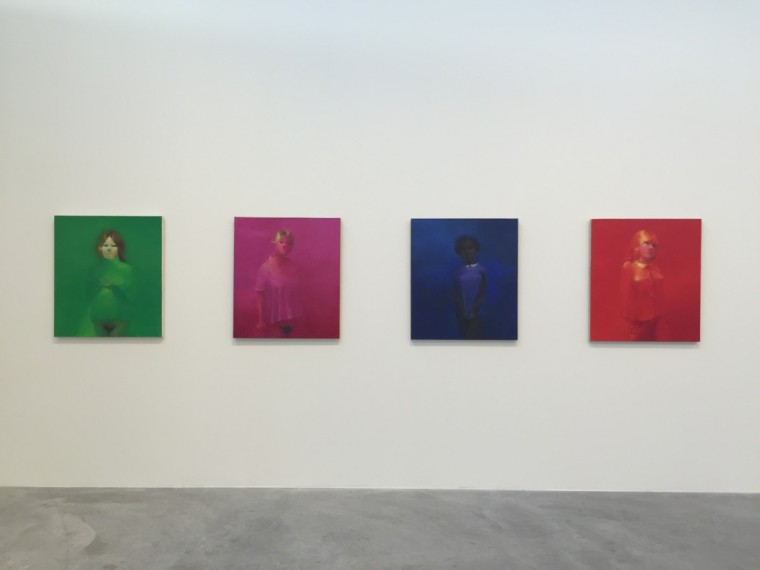 The piece DeRosa mentioned that depicts a woman of color is part of Yuskavage’s series, “The Ones That Don’t Want To,” from 1991-1992, which includes four smaller portraits of girlish figures wearing nothing but their shirts, cropped to display their not-so-juvenile pubic hair. The portraits are marked with Yuskavage’s atmospheric device of washing her characters in fluorescent color. These infantilized women, titled “Kelly Marie,” “Bad Baby,” “Black Baby” and “Buttons,” are bathing in green, violet, midnight blue and cadmium red, as if these half-covered girls are being exposed by strobe lights. The series, much like many of Yuskavage’s paintings, provoke discomfort and humiliation in their viewers. Her characters are at once basking in their own spectacle and disturbing in their demeanor.

This show was originally curated by Christopher Bedford at the Rose Art Museum at Brandeis University and was brought to St. Louis by Jeffrey Uslip, chief curator of CAM. The museum provides a Gallery Guide that includes an interview titled “Model Woman” between curator Katy Siegel and the artist, in which Yuskavage points out that “one of the problems people have with [her] work is not the sex but the vulgarity, which is still culturally unacceptable for women artists.”

Yuskavage believes that she is breaking through barriers, not conforming to what is expected of her as a female painter.

Do her intentions or her identity make the portraits more acceptable? What changes does she make in our culture by representing women in these ways, if any? It seems like Yuskavage produces her work with the hope that the paintings will speak for themselves, conjuring up discomfort and even anger in her viewers and leaving them to decide.