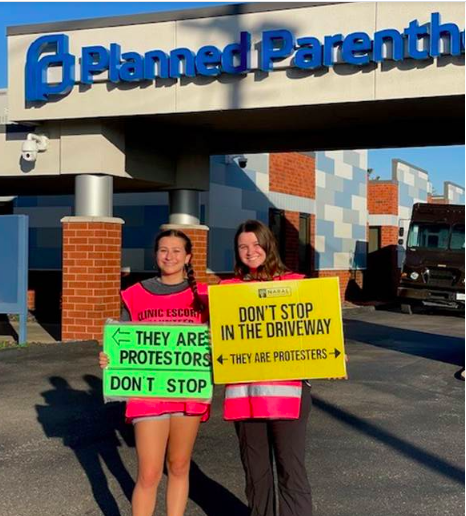 Caption: Students can sign up to escort women seeking treatment from Planned Parenthood into the clinic (courtesy of PPGA).

While many remain discouraged by the clear obstruction to women’s health equity, WashU’s chapter of Planned Parenthood Generation Action (PPGA) has made it their mission to serve as the resource hub for all students looking to gain access to contraceptives and navigate the barriers of Missouri’s abortion laws.

Junior Olivia Danner, who serves as the president of PPGA, believes that PPGA’s work is critical in protecting women’s autonomy across college campuses and is setting an example for the rest of the nation. “Reproductive health is something I have always cared about, even in high school,” she said. “But once I came to Missouri and realized how restrictive the laws were, particularly around abortion, I became really interested in trying to make a difference at WashU and the local community.”

In addition to their current programs, PPGA’s monthly General Body Meetings (GBMs) include panels on reproductive freedom with locals from Missouri’s Abortion Fund, sexual education trivia, and opportunities for students to meet professors, doctors, and activists engaged in the field of reproductive health.

PPGA’s most recent program, which opened in early November, has already had major success in its goal to expand access to contraceptives. Partnering with Habif Health, the Sumers Recreation Center now houses PPGA’s free Plan B program in the Zenker Suite, which is open 9am-5pm Monday to Friday. While sexual health coordinators remain on call to ensure all individuals take just one contraceptive, the program has a “no-strings attached” policy, meaning students are not required to undergo any consultation from Habif.

Another major initiative is clinic escorting through Planned Parenthood, which has greatly expanded in response to the recent overturn of Roe v Wade.

“We weren’t surprised when Roe was overturned,” said Briony Rutzinski, Brand Partnerships Lead at Planned Parenthood of the St. Louis Region and Southwest Missouri. “With the makeup of the Supreme Court, we saw the writing on the wall and have been preparing for this for years. But for other folks, it came as a huge surprise, and they’re now emboldened and energized to fight back to regain abortion access in banned states like Missouri.”

Through Planned Parenthood’s partner clinic in Fairview Heights, Illinois, clinic escorts can volunteer to work on site to ensure patients are safely ushered into the clinic without harrassment from pro-life protestors.

“Protestors try to distract patients from entering the Planned Parenthood, try to get them to turn around, and try to give them pamphlets to deceive them into thinking they’re Planned Parenthood employees,” says junior Rekhta Sashti, Treasurer of the PPGA. “[Protestors] also have a van next door where they advertise free ultrasounds and convince patients to go there instead of the clinic.”

Sashti explained that they travel to the abortion clinic in Fairvew Heights in response to these large amount of protestors that surround the clinic. Protestors remain outside the Planned Parenthood for as long as it is open, standing outside the gate on public property and holding signs to discourage patients.

Sashti recently had an opportunity to attend one of these trips and serve as a clinic escorter herself. “Our job is to make sure we are directing [patients] safely into Planned Parenthood and assuring them the protestors are not associated with Planned Parenthood. We carry signs that say ‘those are protestors, please move forward’ in order to make that clear to patients.”

“When the protesters stop patients, they risk being late to or missing their appointment and possibly causing an accident by blocking the driveway,” Rutzinksi said. “The protesters give out faith-based propaganda and misinformation. They do not provide medically accurate information or compassionate care. Some protesters scream obscenities at patients or try to shame them for coming to Planned Parenthood.”

When PPGA members volunteer, they work as greeters and combat the protesters. “Greeters help folks get into the building safely, from clearing a path in the driveway to walking someone from their car into the health center and then back to their car after the appointment. Our goal is to make sure everyone who walks through our doors feels safe and supported.”

The program began at the start of the school year, and clinic escorting is open to anyone who wants to sign up through Planned Parenthood. PPGA’s main goal is to create a community where student volunteers can travel together, ensuring all students feel comfortable. For those who don’t have a car, PPGA provides reimbursement for car shares and Ubers, for the 30 minute drive to Fairview Heights.

Sashti said the importance of their work is pivotal now more than ever. “This year in particular, reproductive healthcare access is under attack, and I think it represents a general decline in appreciating women’s autonomy in making their own decisions about their body,” Shashti said.