Is “Midnights” by Taylor Swift “‘MID’-nights”? 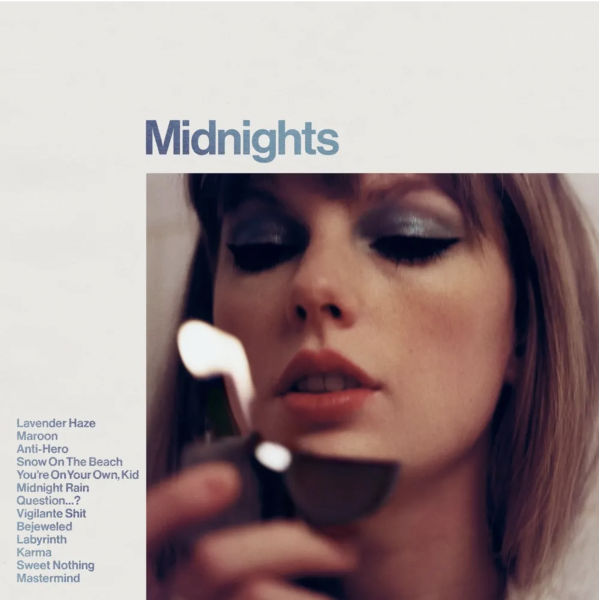 On Friday, Oct. 21, everywhere I went on Washington University’s campus I encountered signs of the release of Taylor Swift’s tenth studio album: “Midnights.” Some students loved it and listened to it on repeat, gushing publicly about her genius, others did not. I am a self-declared Swiftie (ENORMOUS Taylor Swift fan) and to be honest, I was underwhelmed.

In the album announcement, Taylor Swift wrote on Instagram, “We lie awake in love and in fear, in turmoil and in tears,” setting up “Midnights” as an emotionally charged album. She proclaimed it to be, “the stories of 13 sleepless nights scattered throughout my life.” I was expecting an emotional roller coaster, a deep dive into the personal, with the storytelling and nuanced lyricism she showcased on “Folklore” and “Evermore,” her last batch of new music.

Instead, “Midnights” felt more vague. It was a return to the pop-heavy albums like “Lover,” “Reputation,” and some remnants of “1989.” It was as if the pandemic fever dream of “Folklore” and “Evermore” never happened.

The album started off with the song “Lavender Haze,” which felt like the deliciously moody pop of “Reputation.” It began with a warped version of Taylor’s voice saying “meet me at midnight,” which felt a little cringey, since the phrase was so heavily used in promotional material. Although the momentum built over the track, it never culminated into a satisfying conclusion to quench the anticipation of the underlying beats. Even so,  I know many of my fellow students loved this song.

“Lavender Haze” raised a theme of feminism within the album. Taylor sang, “The only kinda girl they see/ Is a one-night or a wife.” I really enjoy when she leans into political messaging, so I loved that this theme continued on tracks like “Midnight Rain” with the lyrics, “He wanted a bride/ I was making my own name.” The song also included the maybe too-on-the-nose refrain, “He was sunshine/ I was midnight rain.” However, I absolutely loved the production and it was one of my favorite songs on first listen.

At 3 a.m. on Friday, Taylor Swift released what she dubbed a “special very chaotic surprise.” It was an extended version of the album, titled “Midnights (3am Edition),” with seven additional tracks.

I loved the extra songs because they were more nuanced than the initial release. I think they deserved a spot on the album more than some of the orignal thirteen.

The track “Bejeweled” was one I felt could be replaced. The lyrics, “And I miss you/ But I miss sparkling…” felt juvenile. In my opinion, “Paris,” on the 3am edition would have been a better choice for the album proper.

The seven additional songs are not only cathartic, but they also give further insight into Swift’s songwriting process.

Another one of my favorites was “Maroon.” Swift plays with her voice by singing the last chorus in a new, gravely tone which matches the darker sensuality of the song. She further expanded on the metaphor of comparing love to different colors that she returns to throughout her discography.

In “Snow on the Beach,” the collaboration with Lana del Rey, the two singers’ voices blended together seamlessly on the chorus, but the anticipated verse from Lana never came. One of my suitemates is a big Lana del Rey fan, and we agreed that we felt cheated out of a collaboration. Although, I have often caught myself humming the catchy lyrics, “Like snow on the beach/ Weird but fucking beautiful.”

“You’re on Your Own Kid” and “Anti-Hero” were the two most self-conscious and vulnerable songs on the album. “Anti-Hero” was witty, playful, with seventies undertones, and jumped between serious and unserious with the cheerful, “It’s me, Hi!/ I’m the problem, it’s me.” “You’re on Your Own Kid” reflected on various mental health issues. Swift sang about body image, “I gave my blood, sweat, and tears for this/ I hosted parties and starved my body,” and the isolation of her budding stardom, “The jokes weren’t funny, I took the money/ My friends from home don’t know what to say.” It is truly the emotional hard-hitter of the album.

“Karma” and “Vigilante Shit” were the newest examples of the revenge fantasy tracks which Taylor Swift and her fans, including me, love. The production on “Vigilante Shit” was swaggery. The lyrics included cheeky gems like, “Draw the cat eye sharp enough to kill a man,” and  “Picture me thick as thieves with your ex-wife.”

“Karma” felt like Taylor Swift was poking fun at fans’ theories of her rumored so-called lost album, “Karma”. The song has already sparked a Tik-Tok trend with various WashU students participating on the account @pey.louise. In both songs, Taylor Swift shows her impeccable sense of humor.

The song “Sweet Nothing” was what I really wanted from “Midnights.” The tune was soft and lively and the lyrics described the mundane bliss of a relationship and finding solace with your partner. It felt like a peaceful lullaby yet that sense of peace was contrasted with an anxiety found in the lyrics: “To you, I can admit that I’m just too soft for all of it.” It was perfectly bittersweet, a good track to cry to and extremely cathartic.

Overall, I was a big fan of the more folk-like style Taylor Swift adapted for her sister albums of 2020, “Folklore” and “Everemore.” For my personal taste, that was a hard act to follow with “Midnights.”But you miss the dead Taylor, don’t worry. She can come to the phone. If you are a big “Reputation” or “Lover” fan, this album is definitely for you. And if “Midnights” isn’t your jam, a new re-recording is surely on the way.