Beauty and History in 80 Minutes: “Dontrell Who Kissed The Sea” 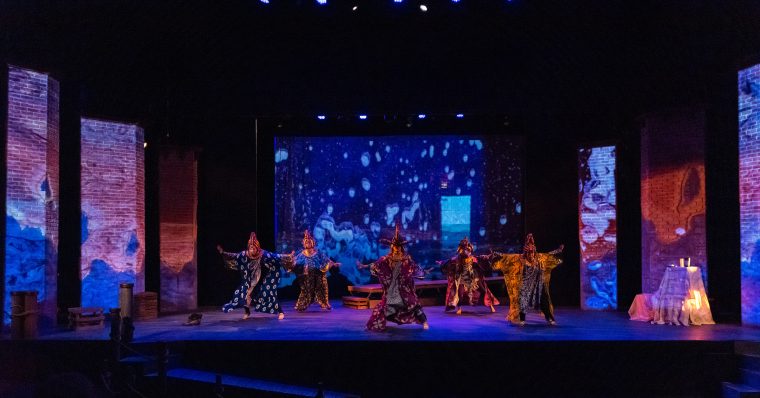 The cast of Dontrell Who Kissed The Sea, dressed as deities on a blue-lit stage (Phillip Hamer/ The Black Rep).

If you’re looking for a cultural experience in St. Louis this summer amidst games of die and brunch at Meshuggah’s, I highly recommend the Black Rep’s “Dontrell Who Kissed the Sea.” The Rep is putting it on through July 23 at Edison Theater, with performances nearly every day until the final show.

The play centers around Dontrell, a young Black man living in Baltimore, the summer before he’s set to go to Johns Hopkins University. College, however, seems far from Dontrell’s mind after he has a dream about an ancestor who was lost during the Middle Passage. Dontrell becomes determined to venture out and find him, documenting his journey by narrating into an old-school tape recorder.

Played by Christian Kitchens, Dontrell appears as a youthful, curious and lovable teen. It’s easy to become wrapped up in his journey, buoyed along by his enthusiasm and hopefulness.

However, it’s really the rest of the cast, who each play multiple roles, that truly elevate the play into a compelling narrative about family and community. Dontrell’s mom, played by Lakesha Glover, had a command over the stage like none other I have seen. Though she is not a mother herself, Glover emoted worry, love and anger naturally and with conviction.

About halfway through the performance, Glover delivered an emotional monologue to Dontrell about his future and her concern that his head isn’t in the right place, rising through fury and ending in soft tenderness. Though I wanted to sit with this scene and let it breathe, Kitchens butted in with a quip meant to be funny, but ended up cutting the moment short.

Each supporting character — sister, mom, cousin, dad, friend, lover –– also plays a deity, humming and dancing to rhythmic music amidst blue, swirling light patterns meant to symbolize water. The costumes are gorgeous. Brightly-colored cloth and ornate headdresses worn over the character’s main costume turn into white, flowy dresses in the final scene. The set is minimalist, mostly wooden crates that act as anything from a TV to Dontrell’s bed.

I’m not going to lie — as the play moved between reality (Dontrell and his friend Robby chewing the fat) to fantasy (ghosts of the sea) — I was a little confused. The line between symbolic and make-believe was often blurred, and I wasn’t always sure which things I should draw meaning from and which I should simply take at face value. However, the mild confusion didn’t really take away from the emotional experience of the play.

The show was peppered with humorous one-liners, mostly from Robby (Mehki Mitchell), but also with quips from sister Danelle, played by Lucia Graff, and dad, Olajuwon Davis. I found myself chuckling (not a “saw a funny tik tok snort,” but real laughter) throughout the performance. I also had chills during some of the more tender, sensual moments, and during one particularly moving scene was close to tears.

After the play ended, the actors came back out for a question-and-answer session with the audience. This, hands down, was the worst part of the experience. Not because the answers were bad, but because the questions were. Sometimes, it’s best not to hear others’ interpretations of art. One middle-aged white man decided this was the perfect time to wax about his time teaching at an “African-American school,” where kids had “loud mothers, who some called angry” (but he didn’t, of course) and “absent fathers.”

Another woman questioned if maybe Dontrell’s quest was a search for masculinity that he couldn’t draw from his father, since his mother wouldn’t “submit” to her husband. After a few minutes of this, I had to plug my ears in order to maintain my sanity. The actors responded gracefully, however, producing nuanced and thoughtful answers that drew focus back to the main points of family, history and race.

Overall, I would highly recommend finding a night (or an afternoon!) to see “Dontrell Who Kissed the Sea.” It’s a lovely way to spend 80 minutes, and it can easily fit into a weekday evening or weekend afternoon. Tickets can be purchased with a student discount at the Black Rep website.

Tags: Dontrell Who Kissed the Sea, The Black Rep, theater