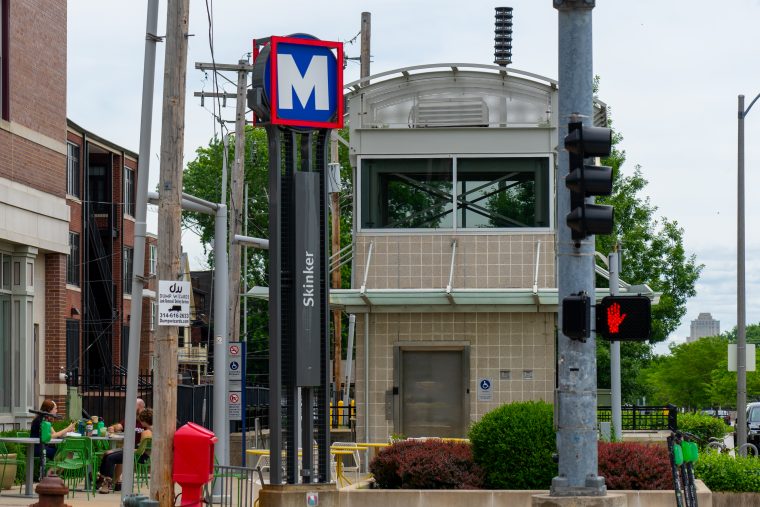 The Skinker Metro stop is just east of campus, and connects to a large network of train stations stretched east-west across St. Louis (Holden Hindes/Student Life).

Before coming to Washington University, I heard a lot of the same rhetoric about St. Louis. If people weren’t asking me “Where is St. Louis, again?” they were telling me about how dangerous the city is, cautioning against venturing too far off campus. For the majority of my freshman year, I heeded this advice, straying only occasionally from even the South 40 (it was peak COVID, to be fair).

One of my friends recently compared campus to a cruise ship. She isn’t wrong — much like a thousand-passenger, all-inclusive boat, campus has pretty much everything you might need for your passage through college (or to the Bahamas). Dining halls? Check. Classrooms? Check. Air conditioning, a gym within ten minutes of any dorm, enough coffee to give an elephant a heart attack…check, check, check.

Some days, I realize I haven’t stepped off the 169 acres that comprise WashU for weeks. Though you’re technically no worse for the wear staying within the bubble, I believe my inertia narrowed my worldview that first year.

On the days that I have the urge to feel more like a genuine St. Louisan, I try to walk through neighborhoods aside from Clayton and talk to other people aside from fellow college kids. One of the best places to do so is the Metro. Hundreds of people ride, often those without easy access to cars.

In my opinion, the Metro is one of the best structures the city has to offer. Traveling as far west as the airport and stretching east into Illinois, it’s not only convenient, but also allows me to pretend I am a typical resident of the city, not just a directionally challenged West Coast transplant.

So on one windy Thursday, I headed to the depth of Big Bend station, hoping to find a few people willing to chat. I am certainly no expert voice on transit, nor on St. Louis. But what I can do is hold a microphone (read: my horribly cracked iPhone 7, opened to Voice Memos) to people I hope have more authority on the Metro and their city than I do — everyday riders.

As I stepped on, I was greeted with flashes of red — jerseys, baseball caps and scarves. Unbeknownst to me, it was Opening Day for the Cardinals. I was drawn towards a pair of middle-aged men decked out in scarlet paraphernalia, loudly guffawing across the aisle to each other.

I sat a row in front of one man and twisted backwards in my seat to go through my typical “approaching strangers for a journalistic endeavor” spiel, face plastered into a smile, hands up and disarming.

“Hi, I’m a student at WashU, and I write for the student newspaper. I’m writing a piece on the Metro and its riders — can I interview you?”

The man, with salt-and-pepper hair and square glasses, agreed. He told me his name was Pat. Unsurprisingly, Pat and his constituent were headed to the Cardinal’s game. He was not a frequent rider, he told me, but was having a great time that day. In fact, he had just met a new friend!

“I don’t even know your name,” Pat said, reaching across the aisle for the other man’s hand. “Scott,” the second one replied. To me, Scott explained: “I played a song that we all love, ‘Sweet Child O’ Mine’, Guns N Roses, and then we just kinda clicked.”

“This is awesome,” Pat agreed.

I let Pat contradict me about when the Metro was established (he said shortly after 2000; it was 1993), but when he started chatting to me about my major and what music I liked, I decided it was time to move on.

Moving back in the train car, I boldly seated myself next to a young woman energetically engaging with a couple across from her.

“You got two stops, girl,” she said after I ran through my pitch. Mckayla, though warm and instantly charismatic, avoided directly answering a lot of my questions. She told me she worked as an overnight nursing assistant in Clayton, but only laughed when I asked where.

“How far do you have to travel to get home after you get off the Metro?” I asked.

“Oh, not far,” she said, waving her hands, before telling me I had one more stop for questions.

Mckayla assured me that she felt pretty safe riding the Metro at night, a seven on a scale of 1-10.

“I’m safe everywhere, girl. Everybody should feel safe with me,” she said. “I have people’s backs, and I’m big on safety — I don’t let anything happen to other people. I don’t witness stuff.”

As she slid past me to exit, I launched a final question. “What are you doing with the rest of your day?”

“I’m buying shots! I got a new job! Shots for everyone!” Mckayla said, grinning.

“Oh, you know, my new job…” Her voice trailed off, and she waved me goodbye, facing the incoming platform.

One of the women she was talking to before I interrupted, with cherry-red hair and rainbow earrings, leaned over to whisper to me as she departed.

“She didn’t want to tell you where she lived or worked because that guy was listening,” she said. Guy? What guy? Before I could ask, red-haired lady left. Looking around, I realized the car had emptied considerably.

“Hey, baby,” said a deep voice from somewhere behind me. Oh. That guy.

I spun around in my seat to face a man who looked like he was in his late 20s, with tattoos covering the backs of his hands. He was standing about two feet away, staring directly at me.

“You’re very pretty,” he continued. “You got a boyfriend?”

“Yup,” I answered, trying to exude a confidence I didn’t really feel. Suddenly, my own rating of how safe I felt was rapidly sliding downwards, from a starting six to a low three.

“I don’t see a ring on that finger, though. I’d give you the world, honey.”

“Uh-huh,” I mumbled, heart beating fast. I had been here before, chatted up without my interest or consent. As a young woman traveling alone on the Metro, I was already half-expecting an interaction like this. It doesn’t happen often, but it’s happened before.

I looked around desperately for another woman. I found none. Instead, I locked eyes with a man sitting across from me. He smirked and looked away, seemingly amused by my predicament. It was enough. I half-walked, half-flung myself to the seat in front of him and whipped out my phone. “Want to be interviewed?” I asked.

The man across the aisle, wearing a reflective orange construction vest, introduced himself by full name. It takes Kennedale Martin two hours to get to work each day via public transit. He works at a construction company that would be 25 minutes by car, but with the Metro and a shuttle that’s always late, it takes more than four times that to commute. If he had four more free hours in his day, Kennedale would use it to sleep. But he refuses to sleep on the Metro.

“There’s all type of weird people here. I gotta watch myself every second,” he said.

Just a few weeks ago, Kennedale watched one man pull a gun on another, after the guy accidentally knocked the first one’s phone out of his hand, cracking it.

“Everyone shifted to the back of the bus, and the dude got off the train. The police came on the train looking for him, and they pointed straight towards me because I’m Black. I couldn’t do nothing,” he said. Luckily, a Black lady sitting near him convinced the police that Kennedale wasn’t their guy, and the police didn’t arrest him.

“All the time,” he said. “I walk down the street and [the police] get a call that somebody [is] walking and looks suspicious.” When he sees the police, Kennedale doesn’t necessarily feel unsafe, but he definitely doesn’t feel safe, either. “It’s unexplainable,” he said.

Kennedale is pessimistic about changing the system — the one that scaffolds racism — or even just improving the public transit system. “It might not be possible in St. Louis,” he said.

20 minutes into my ride back towards campus, I spotted one of many security presences on the train, in the form of a very tall man wearing a bright yellow jacket and holding a walkie-talkie. Johnathon is good at his job. He started only a year ago, but is well-suited to the task of holding the peace on the Metro. Johnathon is an Air Force veteran, a black belt and at least 6’4”. Though he’s an acclaimed ten on the 1-10 safety scale, he uses his words more than take-down moves when it comes to confrontation.

“It’s all about the way you talk to people. You have to talk in a proper manner,” Johnathon said.  “If they are hostile, you walk away. It’s not our environment to approach a hostile person. It’s not gonna be a good look on our end if we are acting like them.” That doesn’t mean, however, that he hasn’t had to pull out a few moves when necessary.

Johnathon told me that the craziest situation he had seen thus far was a fight between two men. “They weren’t abiding by our rules, weren’t listening to us. They came at us with the knives. We had to mace them. We had to contain them,” he said.

As a good audience member to this story, I gasped. “What were you thinking in that moment?”

“Life,” he said. “He could’ve gotten me in the throat, could’ve gotten a vessel.” Still standing, however, Johnathon is enthusiastic about his Metro future. As of right now, he spends 70 hours per week on the trains and isn’t planning to stop anytime soon.

“My job is safety. Making sure our passengers are okay — [that they] have everything in place, intact, to get where they need to go,” he said, smiling wide.

People I Wanted to Talk to but Didn’t

I approached or was approached by a grand total of five people during the duration of my ride. There were dozens more I crossed paths with, though I often observed them from afar.

Two were men who got on in East St. Louis, one wearing a crown of tree branches, the other holding a sprig of small white flowers. They stayed on the train for one stop, then got off and immediately embraced a woman with a colorful headscarf.

Another was a man with thick, calloused palms and scraggly blond hair tucked into a beanie and under a hood. He didn’t have a phone or earbuds, instead looking mournfully out the window for twenty minutes. The last person I saw before the train pulled into Big Bend station was a young woman with small round sunglasses and white Nike sneakers with electric yellow swooshes. We locked eyes as she sat down, and she smiled.

Two hours later, I was back on campus. The presence of people over the age of 25 not carrying briefcases receded into the background as my head spun with stories and quotes and images of concrete neighborhoods. As I stepped back onto manicured lawns, the faint scent of Peet’s coffee hanging in the air, one thought fought its way to the forefront: Back to the cruise ship.

For another Humans of the Metro story, check out: