“I try to use storytelling to move the ball forward for someone”: Humans of New York founder Brandon Stanton recounts his path of success 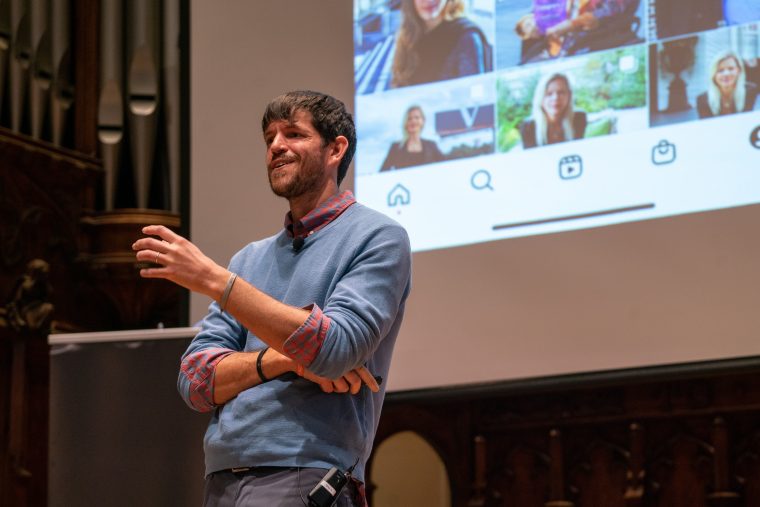 Brandon Stanton, the creator of the massive photography-turned-journalism-turned-philanthropy project Humans of New York, visited Washington University’s campus on April 21. WashU Between The Lines, which creates video narratives telling stories of WashU students, partnered with the WUSTL Social Programming Board to host the event.

At 7 p.m., when Stanton was scheduled to speak, eight of Graham Chapel’s pews were three-quarters filled. Stanton appeared, youthful-looking for his 38 years, dressed in a blue sweater over a red-checked flannel shirt and tan dress shoes that seemed slightly too large for his body.

Stanton explained that Humans of New York was an inspiration that came to him after he lost his high-paying job trading bonds in Chicago in 2008. During his time at the firm, Stanton explained how he picked up photography as a hobby to bring him joy, a break from a high-stress work environment.

Looking back at his time trading bonds, Stanton warned against choosing a life path for how it looks from the outside.

“You’re optimizing your life for the way people look at you,” he said. During his time as a bond trader, Stanton placed his identity in his work because he thought it was the thing that would impress people the most.

When he picked up a camera at the age of 26, Stanton had never taken a photo before. However, he quickly fell in love with his new hobby, and would spend weekends taking artsy landscape photos, which he occasionally sold to friends and family.

Stanton’s first photo containing people was of two kids, with two respective mothers, looking up at something out of frame with the same facial expression. Stanton was thrilled, moved and a little nervous.

“Was it even legal, taking photos of strangers?” he said, reenacting his anxious thought process when he took the picture twelve years ago.

Soon after, Stanton lost his fancy trading job in the financial crisis of 2008 and found himself with a plethora of time to himself. He decided to take a massive step back from finance, and instead moved to New York City with two suitcases and a plan to photograph ten thousand strangers on the city streets.

Those first few months, he had just enough money to pay rent for a tiny apartment with no furniture, eat two meals a day and photograph.

He built a website on Facebook, posting photos and locations. Soon, however, Stanton realized there might’ve been something more he could capture in his interactions with New Yorkers.

“If there’s any constant in Humans of New York, it’s that it’s always changing,” Stanton said. Stanton ran into “the Green Lady” one day, and she gave him a good quote — ”I found I was happiest when green, so I’ve been green for 15 years.”

Stanton posted the quote under the photo and got an overwhelmingly positive reaction. Since then, he’s started getting a quote — or more often a full life story — every time he photographs someone. Many times, the conversation can last hours.

These days, Stanton’s following has skyrocketed to over 17 million people on Facebook and over 11 million on Instagram. He’s published three books and traveled across the world — India, Iran, Iraq, Jordan and the Democratic Republic of the Congo. Along with his increased following, Stanton has amassed a dedicated network of donors who come out in force when an interviewee needs financial help. In March, New York Magazine ran a story on Stanton, calling him ‘a one-man philanthropy machine.’ After a series dedicated to stories from kids with cancer, Stanton raised four million for pediatric cancer research.

“I try to use storytelling to move the ball forward for someone,” Stanton said.

Stanton finished his talk with his supposed-main takeaway from the last 12 years.