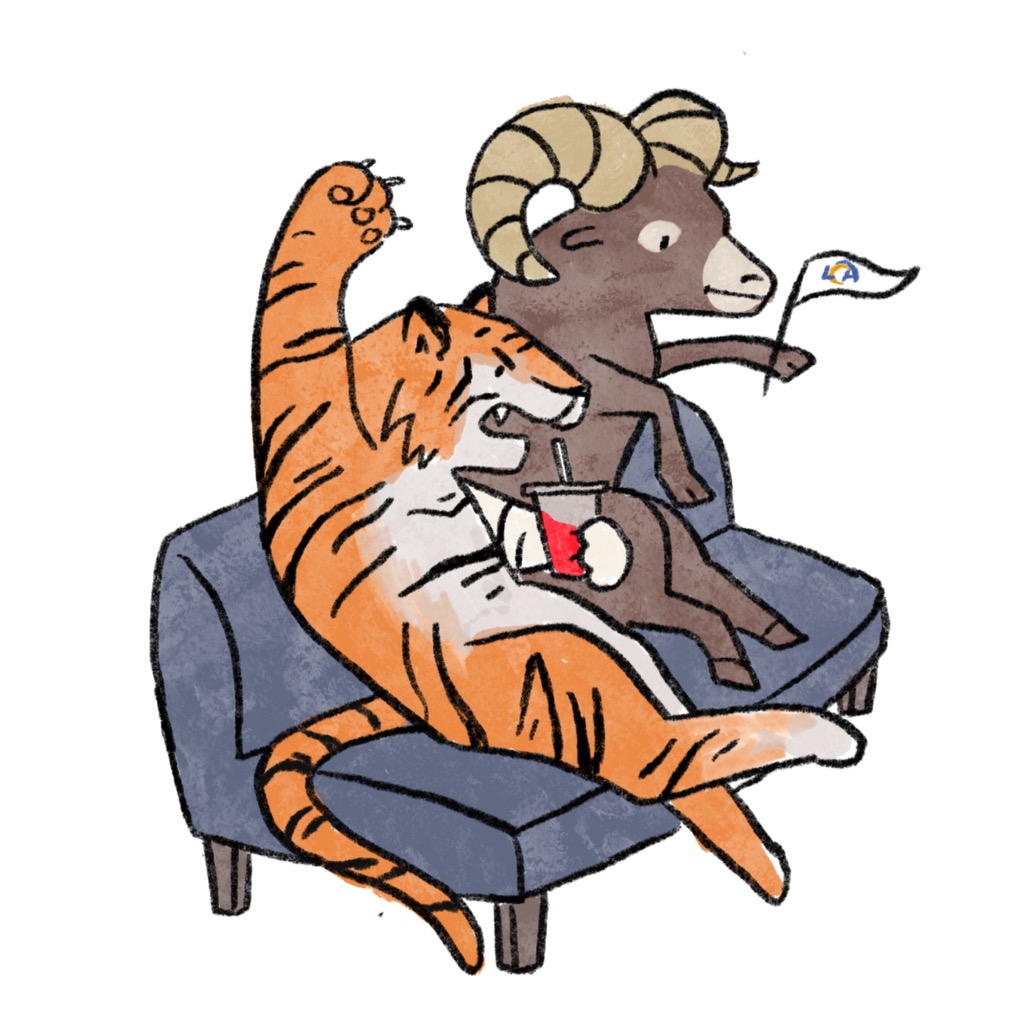 If you’re a football fan who’s been waiting all year to watch the championship game of men in shoulder pads crashing into each other, this is not the article for you — you’re already watching the Super Bowl, most likely only leaving for bathroom breaks or to refill the chip bowl. But if you’re a hesitant, bandwagon or disinterested football fan, there might still be merit in watching Super Bowl LVI. Especially if you’ve been roped into watching anyway, here’s a few ways to look on the bright side.

For the commercials — kind of

The Super Bowl is arguably almost as famous for its commercials as it is for the football, but saying that you should watch the game to enjoy the advertisement feels like an overused recommendation. Instead, I am going to suggest that you watch the Super Bowl for the conversations you can have after the game. The best way to understand the multitude of pop culture references that inevitably arise from Super Bowl commercials is to watch them yourself. You’ll be able to tear up with others about Loretta (Google advertisement, 2020), joke about Drake from State Farm (State Farm advertisement, 2021) and sing along to a reboot of the 2000s pop song “It Wasn’t Me” with Mila Kunis and Ashton Kutcher (Cheetos advertisement, 2021). Super Bowl ads are a cultural phenomenon, and dissecting them alongside your friends — figuring out which ones were your favorites, which ones were tearjerkers and which ones were straight-up cheesy — is most definitely part of the fun.

To obnoxiously root for a team that’s not playing

If you’re like me, you only really watch football as a way to exhibit city pride. I’m a huge Seattle Seahawks fan because I’m a huge Seattle fan, and want everyone to know it. So even though they didn’t even make playoffs this year, the Super Bowl is the last game of the season to bring up any Seahawks tidbits/pride. For example, no matter how good a throw Joe Burrows can make, Russell Wilson could have done it better. Did you know that Pete Caroll has won 152 games as head coach of the Hawks, while Bengals’ coach Zac Taylor has only won 16? Try this with your own team, provided they’re not already playing. Not only is it a way to continuously remind everyone of how cool your city is, it’s also the best time to pull out your overpriced team gear that you won’t be able to wear again until September.

For many in St. Louis, Super Bowl LVI will be hard to watch. For the second time since they left St. Louis for Los Angeles in 2016, the Rams will play on the NFL’s biggest stage. Furthermore, the Rams’ new 70,000-seat palace in Inglewood, California just so happens to be the venue for this year’s game, shining a spotlight on the profitable LA market that lured the team to the city. This year’s Super Bowl is a must-watch event, and has the potential to be one of the most entertaining games in recent history. That’s in large part because of all the new faces that will be on the field. The Rams made the Super Bowl just three years ago, but that team bears little resemblance to the current roster. Most visibly, quarterback Matthew Stafford was acquired from the Detroit Lions before the season. While already considered a top-tier quarterback, Stafford has proved a great fit for head coach Sean McVay’s offensive system and found the post-season success that eluded him in Detroit. Stafford is surrounded by a talented offense, headlined by receivers Cooper Kupp and Odell Beckham Jr., and the Rams sport an elite defense led by Aaron Donald and Von Miller.

The Rams’ opponent, however, may be even more exciting. The AFC champion Cincinnati Bengals have reached the Super Bowl for the first time since 1989. Few picked the Bengals to even make the playoffs, but Cincinnati won their division and improbably ran the post-season gauntlet. Though it may still hurt to see the team that left St. Louis compete for a championship, this year’s Super Bowl is full of intriguing subplots, feel-good stories and extremely talented players.

You never lose when you root for the underdog

I’m a big believer in rooting for the team favored to lose: the underdog. First and foremost, if they don’t win, it’s not a huge deal — it’s expected. But, if they do pull through, it’s so much more rewarding than if the team was favored. When the underdog wins, it feels like a victory.

In the upcoming Super Bowl, the Los Angeles Rams are playing the Cincinnati Bengals. The Bengals have not made a Super Bowl appearance in 33 years, they’ve never won a Super Bowl and the Rams are favored to win. Essentially, it will be a pretty big deal should the Bengals win. As first-year Eli Perlin, an avid Bengals fan, said, “To watch your sports team lose year after year, it’s really hard. To be from Cincinnati and finally see someone win, it’s really exciting… I’m going to keep rooting for them, and hopefully they get the win.”