Brownies, lawns and music: A freshman’s dive into entrepreneurship 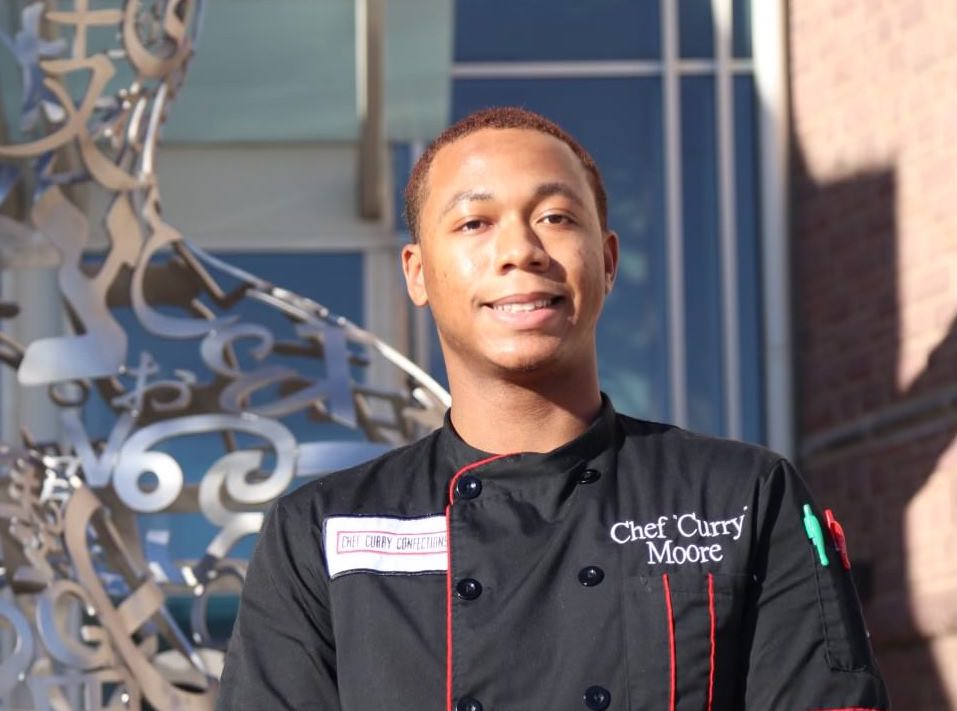 CraigAnthony Moore sells baked goods through the company he founded during his sophomore year of high school. (Photo by Elle Su/Student Life)

When freshman CraigAnthony Moore walks past Bears’ Bikes, Bear-y Sweet Shoppe, Wash U Wash, and the South Forty’s other student-run businesses, he has his eyes set on someday adding his own: Moore Services and Company.

During his sophomore year of high school in 2019, Moore noticed that several students in his community were attempting to generate extra income by selling candy, but that the market was getting too crowded. In response, he decided to capitalize on his passion for baking by selling brownies. His baking enterprise would eventually be called “Chef Curry’s,” one of the three services that his company currently offers.

Once the pandemic started, the young entrepreneur expanded into offering lawn services. And then, right before moving to campus, Moore added in his company’s third service: DJ-ing and providing musical entertainment services to clients.

As of right now, Moore Services and Company “operates as a sole proprietorship,” meaning Moore handles all of the marketing and communications, manages the deals and partnerships and contributes to some of the hands-on aspects of his business, such as baking Chef Curry’s desserts. When his lawn services are in high demand during the summer, Moore subcontracts other lawn care companies to streamline efficiency.

Moore grew up in a single-parent household, and was motivated by a desire to contribute to his family’s finances. However, he faced certain limitations. “We lived in subsidized housing, [and] in subsidized housing, your household income cannot exceed a certain amount,” he explained. “So that means that I actually couldn’t work a W-2 or W-9 job because had I done that, we would have exceeded the income gap for the household. So there was always the push to kind of make money, but not necessarily in a formal job or position.”

Since coming to WashU, Moore’s main goal for his business has been to “transition from side hustle to official business entity.” Part of this process has included implementing some of the information and skills he’s learned from Olin Business School classes into his company strategy.

One of his big future goals is to work with WashU’s Skandalaris Center to establish a physical location for Chef Curry’s on the South 40.

After further development, he also plans to sell shares of Chef Curry’s, comparing it to “starting a franchise.” He wants to dedicate the rest of Moore Services to offering a “plethora of services to the St. Louis community. And if we grow beyond the St. Louis community, that’s fine.” Real estate and tax preparations are two of the planned expansions.

Moore also envisions his business, especially Chef Curry’s, “giving back to the community.” He would eventually like to create the Chef Curry’s Scholar Program, which would fund scholarships for aspiring student entrepreneurs within the Ferguson-Florissant School District. Chef Curry’s has also recently partnered with Natalie’s Cakes and More in Florissant, Missouri, which Moore says is a great way to “help each other expand our networks.”

He also has plans to give his leftover products to the surrounding communities.

“My goal with my products is to give them back to the unhoused when they don’t sell. So say, for instance, I don’t sell out 150 brownies in a week. The goal would be to gather students from the community, from the Washington University community, and maybe affiliate WUPD, and go to downtown St. Louis, where we have a pretty large homeless population, and then just get the products out to the unhoused as a way to get back to the community.”

If Moore has learned anything about himself through his business endeavors, it’s that he is extremely ambitious. As his ambition continues to grow, he leans on friends and family, who he thanks for “being there since day one.”

“My friends were a huge support, and I just want to say thank you to those who have continued to support me.”

Moore’s family has helped him with anything from testing brownie flavors to promoting the company’s services. His mom’s help has been especially significant, as she supports every event and uses her own personal networks to spread the business’ message, Moore said.

After graduation, Moore is considering either getting a master’s degree or working at a real estate firm to gain experience, which he says is “where [his] heart is.”

For now, Moore is still working on expanding his company. And his experience has given him insight for any students looking to start their own businesses: “A lot of times we think that we have to start with a business plan, and truth be told, you don’t. Don’t be scared to just do it.”