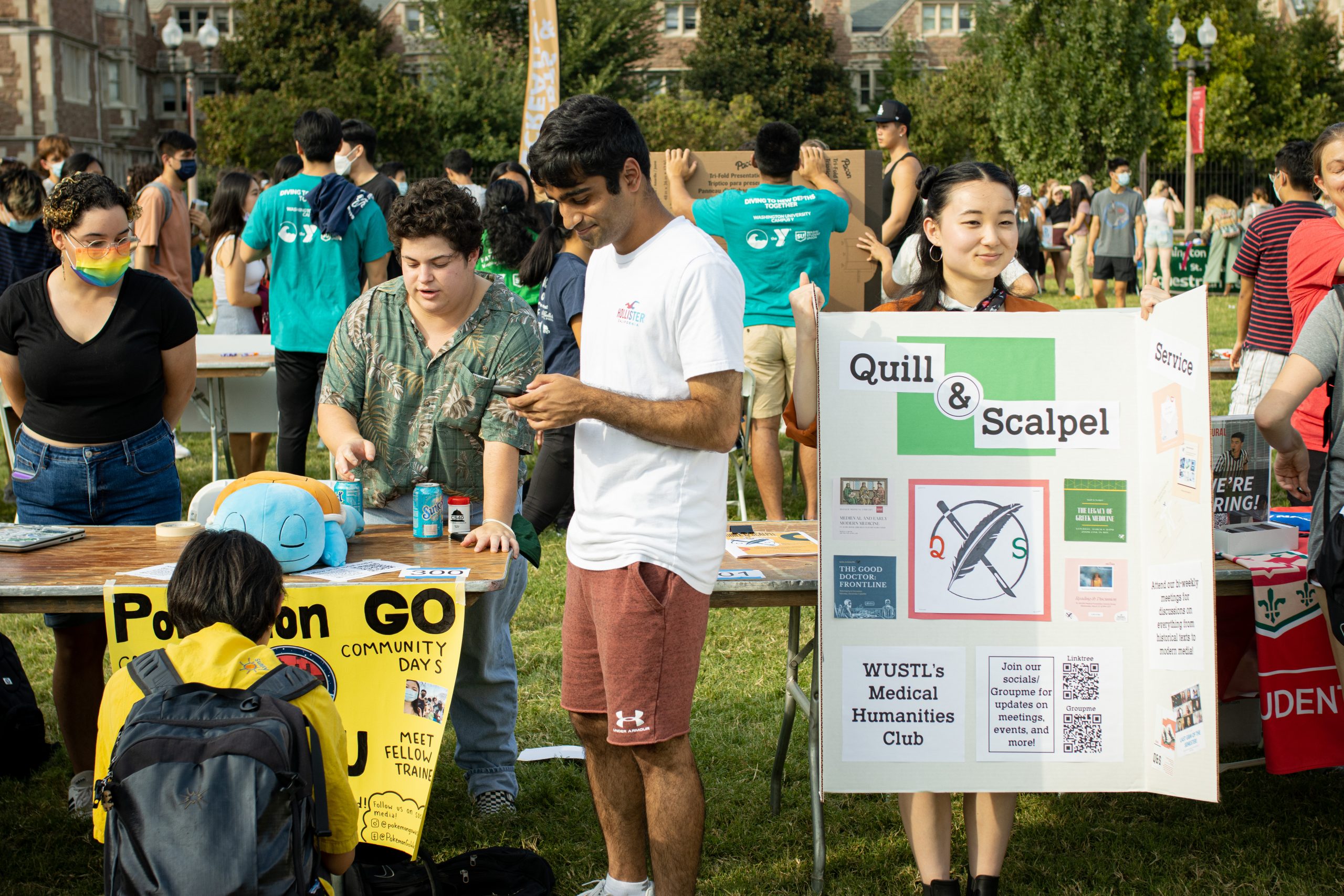 Students present their signs for the ‘Pokemon Go’ and ‘Quill & Scalpel’ clubs at the Activities fair. (Curran Neenan/Student Life)

Last Friday, with an earthy post-rain smell hanging in the air, hundreds of student organizations and thousands of students flocked to Mudd Field for the biannual activities fair. White shoes were muddied as students crouched to add their names to mailing lists and accumulated handfuls of flyers.

After a year of virtual or almost non-existent programming for many organizations created unique barriers to involvement for the class of 2024, this semester’s club leaders aimed to recruit sophomores in addition to freshmen.

“I think it was really difficult [to maintain first-year student participation], especially because we already had infrequent meetings,” she said.

Frontiers is a publication that draws upon students interested in medicine, art and writing, so the organization has historically thrived on collaboration between students with majors that don’t often intersect.

“The editor and illustrator and writer work together, but doing that over Zoom and setting up those meetings, especially initially for new students, is very difficult,” she said. “So I don’t think we had a lot of first year involvement [last year].” 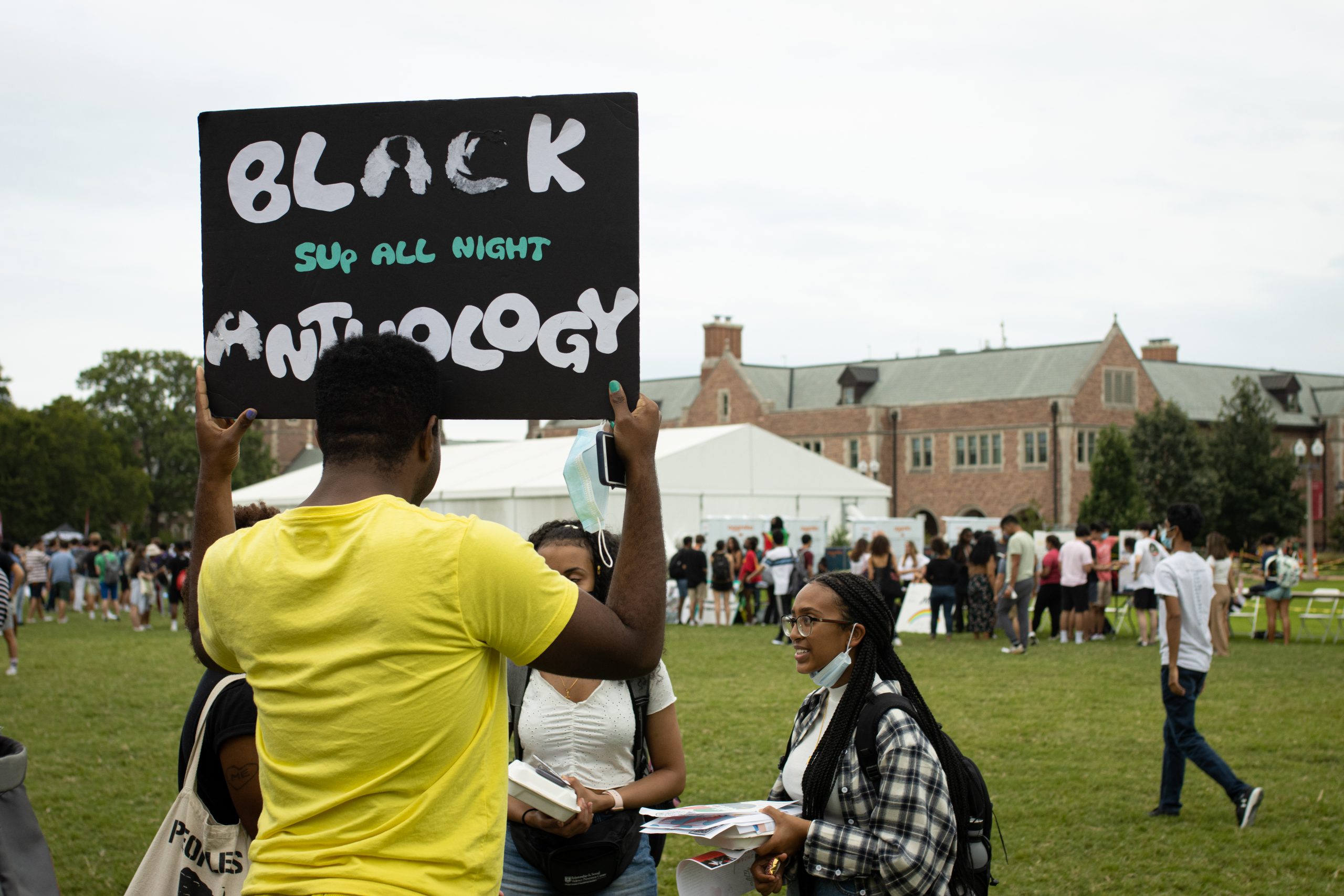 A member of Black Anthology, an annual student-run production, holds up a sign to catch students’ attention. (Curran Neenan/Student Life)

Many other organizations also struggled to shift to the virtual format necessitated by the pandemic, making it harder for new members to participate in activities and bond with group members.

Senior Eric Song, vice president of the service group MedEd, noted similar difficulties in developing active members of the club during the previous year. “[There were] people that would be technically in the club on the Slack channel, but probably wouldn’t be engaged as much in the club because we didn’t have much in-person programming or because of the time zone difference,” he said.

Even though MedEd had a long member list, Song noted low participation.

“I would say we were pretty successful with recruitment, but in terms of retention and engaging throughout the entire duration of the semester, that was probably the more difficult challenge,” he said.

When the activities fair took place virtually in 2020 — before freshmen even stepped foot on campus — many students eagerly signed up for more clubs than they ended up engaging with. The lack of physical meetings made it challenging for students to feel the energy of community in different clubs, and so while several of this year’s sophomores are technically part of organizations, they have often been less involved in their activities than they would be in a normal year.

A student considers their next move. Members of the Chess Club played blitz games against prospective members to garner interest. (Curran Neenan/Student Life)

Sophomore Gabi Grasso attended the fair to search for new communities on campus. Although she is already involved in a few clubs, Grasso said that she wants more from her extracurricular life after having a hard time connecting with other club members in a virtual space.

“I did feel quite lonely throughout last year just because I wasn’t seeing a lot of people in person,” she said.

Throughout the fair, Grasso made it a point to limit the number of flyers she took and mailing lists she joined. “I definitely didn’t go at it with the same approach that I did last year where I just kind of signed up for anything,” she said.

In the coming year, Grasso hopes that increased in-person programming will allow her to bond with more people. “Although I did get to know [other club members] a little bit, I wouldn’t say that I made too many really close friends,” she said.

“I definitely do expect a greater number of sophomores auditioning than we’ve experienced in the past,” Rich said. “I would hope that sophomores who were either remote or didn’t audition last year just for personal or extracurricular reasons would do so if they wanted to.”