A new year to fall down and laugh 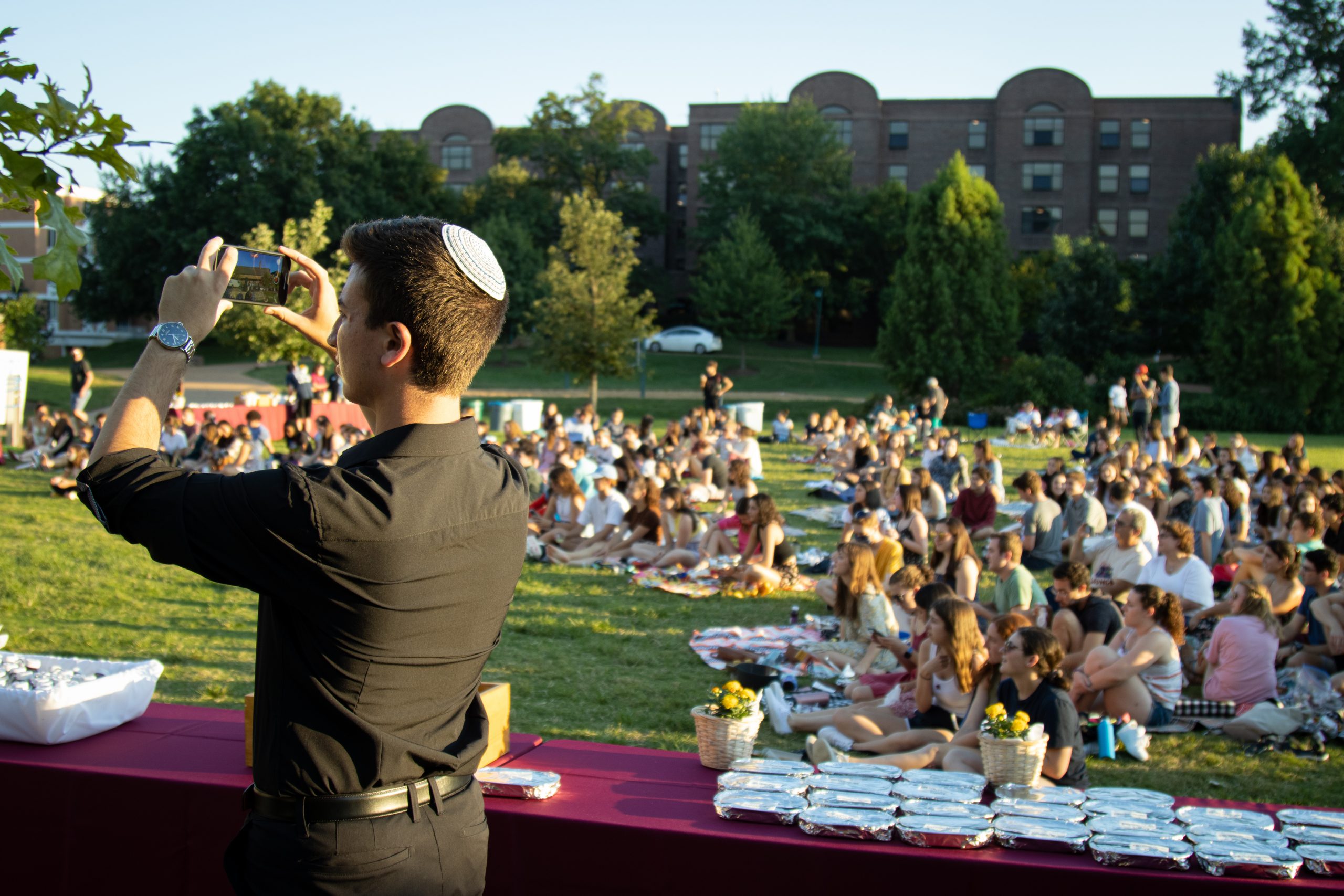 A member of Staam, one of WashU’s a cappella groups, takes a photo of Rosh Hashanah services. (Curran Neenan/Student Life)

Years ago my mom told me a story that I think back on more than she probably realizes. As president of her class in high school, she was tasked with delivering a speech at graduation and then listing off the names of her classmates. For the very first name, she accidentally said the name of one of the school’s teachers instead of the similarly-sounding name of a student. People laughed. So did she. And I’m sure Charles hasn’t thought about it in many years. I don’t know how much of my take on life has been informed by that particular anecdote of hers, but regardless, it’s stuck with me. I have a weirdly high threshold for becoming embarrassed. I just laugh instead.

Last Friday, I was sitting down with a friend and we had the idea to try out for a cappella. It was one of those marvelous ideas with no inherent downside, as long as I was willing to deal with rejection. Sure, I wasn’t really able to do work on Saturday because I was busy traipsing across campus to showcase my inability to sight-read music, but besides losing a study day, there was really no drawback.

To be fair, it wasn’t like singing in front of groups judging my singing ability sounded pleasant. I found the prospect of performing in front of people incredibly uncomfortable, which led to me asking someone in a cappella prior to my audition if I could bring a guitar to help my performance. Given that a cappella is, by definition, music without instrumental accompaniment, this was an indisputably terrible question. So it goes without saying that I was ill-prepared to sing without background music, let alone figure out sight-reading or perform scales with grace.

I woke up to an email on Monday morning informing me that I did not receive callbacks for any of the six groups I auditioned for. It wasn’t any surprise, especially after having heard the people auditioning before me belting out their songs with vocal power that I simply do not possess. But I was proud of myself for trying.

That evening was the first night of Rosh Hashanah, the Jewish New Year, and Hillel’s Rosh Hashanah concert opened with six a cappella groups — three of which I had tried out for in dorm common rooms only two days prior. They were all fantastic. Their performances were full of dedication and patience. I loved listening to them.

And then I finally had my moment on stage. It really shouldn’t have been notable at all, but life likes throwing us into funny little moments that we get to choose to make the best of. When I was called up to read a poem, I leapt up from my picnic blanket and jogged toward the stage in my blue plaid dress. The poem, however, wasn’t waiting for me on the stage, and so I jogged back to my picnic blanket, retrieved my phone, and jogged up to the stage yet again. By this time, I was fully panting. To complete the picture, the poem I read was called ​​”Breathing Yourself Awake.” The irony of someone panting while reading a poem about the importance of breath was not lost on me or the rest of the crowd. And so, like my mom would have done, I chuckled leaving the stage.

I could have just never volunteered to read, and I never would have panted in front of hundreds of people. I could have never auditioned for a cappella, and I never would have received a bulk email that kindly addressed me as “*|FIRSTNAME|*” and continued on to tell me that I got zero callbacks. But the panting and rejection is all a part of life. I want to make this (Jewish) new year a time of no lost chances. If I try something and I fail or make a fool of myself, I get to look at it as a learning opportunity or a time to laugh. I don’t want to regret missed opportunities.

The Rosh Hashanah concert ended with Jewish rockstar Rick Recht leading us in prayers and Jewish bangers. I was dancing along, as should always be done while listening to music. The whole evening was a great start to the Jewish New Year — and a fantastic reminder that if we’re not our own best audience, we end up our toughest critic.