Pandemic pickup: How a group of freshmen created a community on campus through Frisbee

Taylor Swift’s Fearless (Taylor’s Version) plays as the backdrop to a 6-per-side game on Mudd Field. I have participated in past Frisbee pickup games, but today I’m here just as a reporter, spectating the current matchup between dark and light shirts. The sun is out, but pickup ultimate Frisbee games on the Washington University campus continue regardless of rain, shine or global pandemic. 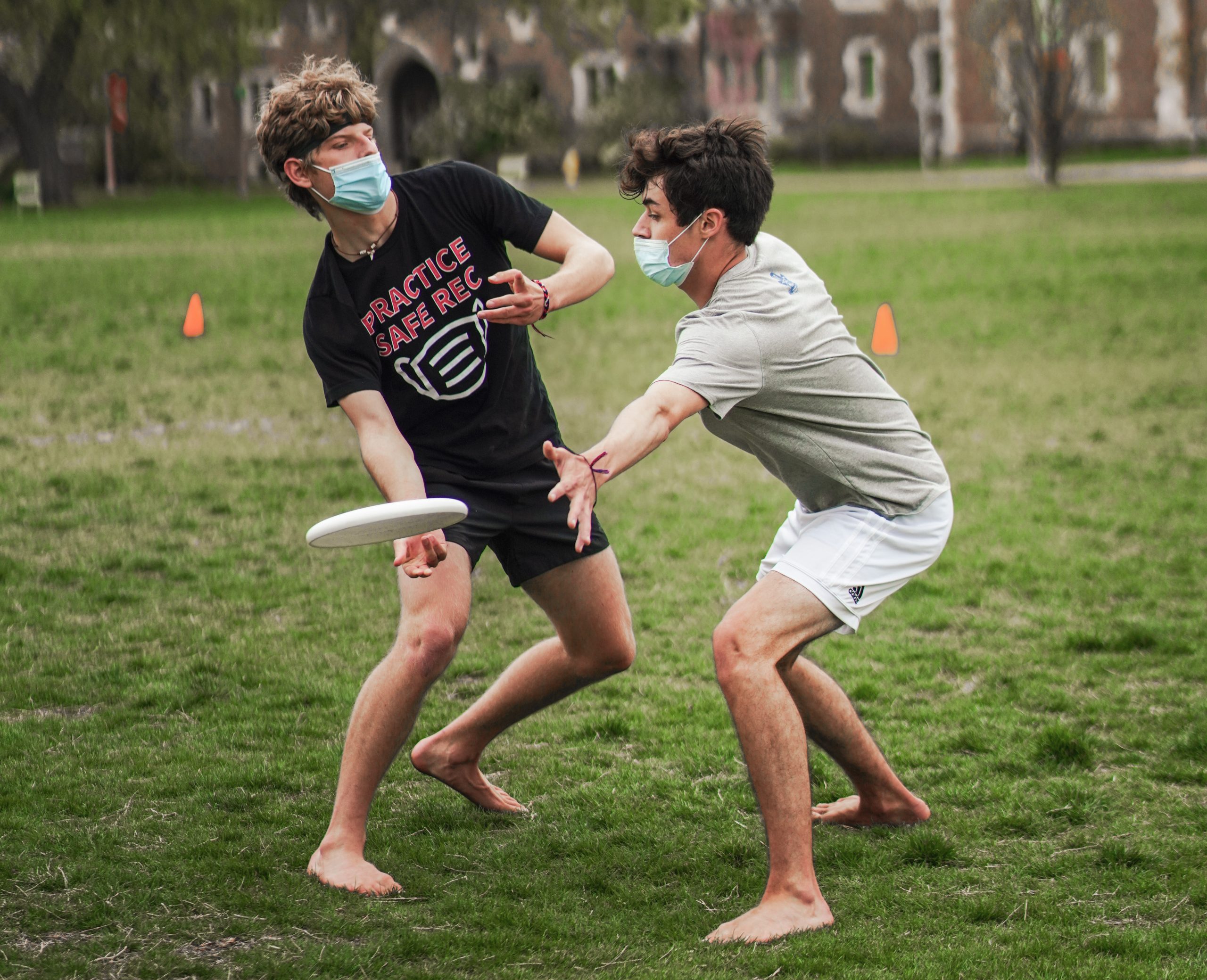 Despite the cancellation of club and intramural sports, several Wash. U. freshmen have built a community through an outdoor activity that upholds the University’s COVID guidelines. Today’s Saturday afternoon match, similar to the dozens beforehand, was scheduled by a request in the Ultimate GroupMe, a chat with 113 members and counting.

As an occasional player, I’ve seen firsthand how something as uncomplicated as throwing a Frisbee can become an escape from the confines of the four-walled dorm room and create a space filled with freedom and pure enjoyment.

The group originated from a simple toss. Freshmen and suitemates Nic Sprague and Seth Fisher-Olvera took a Frisbee out to Mudd Field during the first week of the fall semester. Other freshmen approached them to join in, and soon after a chat was created and expanded from day one.

“My college experience would be completely different if I hadn’t asked Seth on the first day, ‘Hey, you want to go toss a Frisbee?’” said Sprague. “I can’t even imagine how many hours I’ve spent playing ultimate over the last two semesters—probably hundreds.”

Listen to live audio of Nic Sprague to hear what it’s like to be in the midst of the action.

Pickup ultimate evolved as the number of players grew with each game. The shoes that marked the end zones of the field have been replaced with bright orange cones. Players forego socks and shoes while playing but wear masks on and off the field.

“We started off playing a mini game called ‘box,’ and then as soon as we had enough people to play a real game with zones and actual rules, we played pretty much every day,” Fisher-Olvera said.

Today’s game continued for three hours, but some matches play on until sunset, others into the dark. The group can be spotted on Mudd Field most days, even when the weather forecast may persuade others to stay indoors. Yet these games can make for some of the most memorable moments.

Listen to live audio of Seth Fisher-Olvera to hear what it’s like to be in the midst of the action.

“We had this one day when it was pouring rain—it was so gross and so cold,” said group member freshman Casey Ellyson. “But we had so many people come out because it was Thanksgiving and it was our first break since the beginning of the school year. And we played into the night. I got back to my dorm and my feet were caked in pieces of grass. That was a big moment when I was like, ‘Wow, these people just love to be here.’”

Ellyson played competitive ultimate Frisbee in high school and plays for the Wash. U. Women’s Ultimate team. Although she suffered an injury in the fall semester that stopped her from getting to play in matches, she regularly comes to spectate the pickup games.

“I love watching, but honestly, it’s a little painful—I really miss it,” she said. “One day, I was sitting on the side doing homework and someone asked, ‘Casey, would you want us to play a walking point for you?’ I got on the field and I almost started crying. It’s been three months since I could stand on the field. I appreciated that so much.”

Other highlights are sparked by conversations in between points and even while tossing. “Last week, somebody was talking about the cycle of life and whether death is a part of life,” recalled freshman Riley Endries. “We got into this big debate about whether death was a part of life or the end of life or it can be all encompassing and it can be both. Somehow five people on my team were all debating this strange topic as we played.”

Ultimate players have built lasting friendships from the sport. “I had a lot of friends who I knew before Frisbee, who now come out and play,” said freshman Kayzad Bharucha. “For me, it’s been about tightening those bonds. I’m also starting to make connections beyond just the freshmen and meeting upperclassmen, which has been great.”

Listen to live audio of Wilson Tryon to hear what it’s like to be in the midst of the action.

Players’ skill levels range from collegiate club athletes to those who haven’t picked up a Frisbee before stepping onto Mudd Field. Despite the irregular circumstances, the group has found a way to get away from their work, release energy and build a community that will last far beyond the impact of the pandemic.

“We’re proud of what we created,” said Fisher-Olvera. “There’s something for everyone.”