“I honestly started making videos because I was bored during quarantine last May… I wanted to see how far I could take it,” said Sophia Xu, a first-year Ervin Scholar and part time-YouTuber who has accumulated 4.01K subscribers in less than a year.

Xu took inspiration from her favorite fashion and vlogging YouTubers, such as Bestdressed, Arpi Park, and Kurtis Conner. Though her content was originally fashion-oriented, she has since found her niche in vlogging about Wash. U.

“I think about what I would’ve enjoyed watching before I came to Wash. U. and try to make that for incoming students,” she said.

Xu noted she receives many direct messages from viewers curious about college applications; her most popular video, a college decisions reaction, has raked in almost 68K views. Xu posts roughly once a week, which requires a day of filming and around three or four hours for editing. Despite serving as an executive of the University’s medical education club, MedEd, and an intern in a psychology research lab, she “finds it pretty manageable” to balance schoolwork and uploading videos.

Since becoming a monetized creator in October, Xu earns around $100-200 monthly, but this past month she has made more than $500. The monetization, though sweet, doesn’t motivate Xu; she just hopes to continue making videos for as long as she has the time.

“Filming, editing and the whole video-making process is something I really enjoy doing as a hobby,” Xu said. “For now, though, my priority and career path is focused on getting into medical school and becoming a physician.”

Recent Washington University graduate Nathan Card has fossilized the entirety of his college experience on YouTube. He began his channel the summer before his senior year of high school, lightly inspired by Casey Neistat and other vloggers, but ultimately continued uploading that fall because he enjoyed the interactive aspect of posting videos. 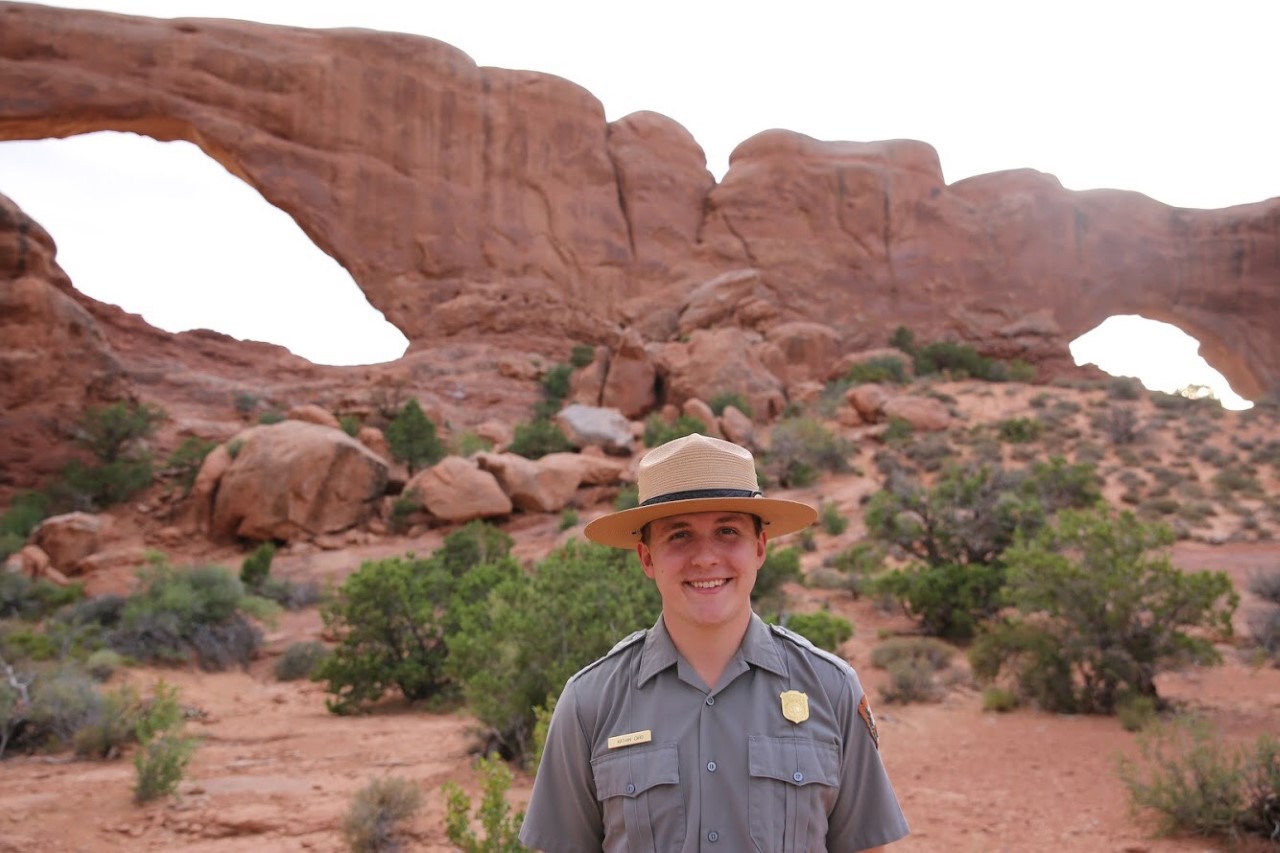 Recent Wash. U. alum Nathan Card, known on campus for his YouTube videos, is now working to become a park ranger. (Courtesy of Nathan Card)

“Having a group of people along for the ride, internet strangers as they were, made college admissions seem less daunting,” he said. His subscriber count has since grown to 3.55K, many of whom are loyal fans.

“The comments from subscribers who have been around for years are always the best,” Card said.

In his three years at Wash. U., Card mainly filmed “some mix of college vlogs and informational videos about college,” where he captured the daily antics of Wash. U. living interspersed with some truly remarkable moments, like times he met Anderson Cooper, Tyler Oakley and Deputy AG Rod Rosenstein. Card cherishes these digital time capsules.

“I can look back and watch myself and my friends grow up,” he said. “There’s something really human about that for me.”

Despite having served as his junior class president, a senator in SU, a model UN member and a tour guide, Card admitted to having earned the title of “YouTube guy” at Wash. U., which was “kind of fun” but something he’s happy to leave in the past.

After graduating two semesters early in August of 2020, Card drove straight to Moab, Utah with “no job, no plan and no housing,” just managing to land a tour-guiding gig at Arches National Park. He has since left Moab and enrolled as a student at the National Park Service Park Ranger Law Enforcement Academy (a mouthful, he knows). After leaving behind the novelty of college, Card said he’s learned that he “really likes working ‘real work’—like, where they give you money, not homework,” though he isn’t sure where that leaves his Youtube career.

“Post-academy, the nature of my work will be such that having a digital presence… could be a real problem,” Card said, though he hopes to continue vlogging whenever he can: “Old habits die hard!”

“I just like entertaining people”: One student, two viral tweets

Amateur Twitter user and Washington University freshman Harry Campbell has had two tweets reach the limelight. His first, from January 2021, parodied the agonizing moments in film when a title is literalized in the dialogue: Harry photoshopped an image of Walter White receiving the (fake) text “I know you’re Breaking Bad” and received over 214.3K likes and 19K retweets.

Twitter’s algorithm is notoriously unsupportive for small accounts looking to go viral, but Campbell has learned the recipe for exposure. He explained that viral Tweets rely on impressions or retweets, which vastly expand a Tweet’s audience, and engagements, such as likes and comments, because “even if everyone in the world sees your tweet, if they don’t think its funny, no one’s going to click on it,” he said.

“I just happened to have the right combination of those two,” he said, adding that the best part was that “I got paid!” A small company reached out to Harry for collaboration, and by posting their ads beneath his tweet, Harry earned $60—which turned into a trip to Wendy’s—and a violation of Twitter’s Terms of Service, meaning he had to delete the ads shortly after his first payment.

A month later, Campbell wrote a Tweet poking fun at a ridiculously understated Yahoo News headline which conveyed that comedian Chris D’Elia recognized his sexual assault allegations “looked bad.” Through the same process as before, he received just over 100K likes.

“People like stuff that’s funny in real life more than they like made-up jokes,” Campbell said, so he’s learned he can entertain by simply bringing public attention to unbelievable pop-culture instances.

When asked if he had any goals with his Twitter, Campbell said that he doesn’t have any concrete aims. “Twitter isn’t some means to an end,” he said, adding that he simply uses it to develop  “jokes and bits” and to make connections, both personal and professional.

“I just like entertaining people,” said Campbell, “so I’m probably not going to stop doing that.”

St. Louis born and raised, junior Eva Adams was set to attend Washington University after graduating high school in 2015, but ended up deferring for a year in order to grow her modeling career. Time spent shooting in New York, Los Angeles and Sydney led to an exponential growth of Instagram followers—she now has more than 20.4k.

“I think with the fashion industry, when you have that much exposure within such a short amount of time, [gaining an internet following] is inevitable,” Adams said.

Adams attributed her time spent in Los Angeles which she called “the hub for all things social media,” as having a great influence on her interest in posting fashion content. Followers were drawn to her growing status and fresh aesthetic, and “wanted to keep tabs,” she surmised.

Adams described her Instagram’s permanent posts and transient stories as two separate monsters, but noted that “they definitely overlap… I like to keep things as aesthetically [pleasing] and natural as possible” in both areas. Her delicately curated feed, composed of photoshoot outtakes and exotic sceneries, is juxtaposed by the thrilling mundanity of daily workouts, meals, and art projects captured through stories. Cognizant of the threat social media has been known to pose on users’ mental health, Adams prioritizes transparency over perfection.

“I want… friends, peers and followers to feel really good about themselves,” she said. “Whenever I post… I just try to be myself, as opposed to what I want to present to the world.”

Adams emphasized that she doesn’t like to “fake it.” She leaves trend forecasting to the professionals, and just posts what compels her, only aiming to “really feel confident about every post” and not lean on Instagram’s archive feature too much.

Adams has maintained her social media presence since deferring her first year, but envied her friends getting the “real college experience,” and quit travelling the world to begin at Wash. U. in 2016. “I found some of my best friends for life at Wash. U., and then I went back to New York, had another successful summer, and decided to spend another two years over there.”

Adams now finds herself back in St. Louis, completing her third academic year at the age of 24, double majoring in psychology and economics with a minor in design, which she jokingly calls “the weirdest trifecta.” Adams plans to graduate in December 2021, and would like a job that bridges her majors and minors. “Something fashion oriented, but not necessarily in front of the camera,” she said.