From behind the plexiglass: The people who make up the Bear’s Den

These days, the Bear’s Den doesn’t look the same. Crowds of people aren’t hovering in front of the stir fry station waiting for their name to be shouted across the room. The cross country team isn’t slamming together four tables in the middle of the cafeteria. Students aren’t making a mess of the salad bar at Paws & Go.

No, things aren’t like that in 2021. But things are still moving. The stir fry cooks are still huddled around the gigantic circular stove mixing chicken with red peppers with teriyaki sauce. The cashiers are still telling the kids to open up their box and asking if they have extra meat. The custodial staff are still walking around with a rag and wiping away the remnants of chocolate cupcakes from Cherry Tree.

No matter how many booths are blocked off by blue tape, the people who make BD what it is are still there.

“The best part of my day…can we come back to that question?” Keana Jones asked. At 9:30 p.m. on a Wednesday night, she’s four hours into her shift as a cashier at the Bear’s Den, and a little shy when approached by two Student Life reporters. She admits that she’s not used to being interviewed, but seems to relax a bit when talking about the students she interacts with all day long.

“When they acknowledge me by my name, I feel like they’re really paying attention to me,” she said, smiling under her mask.

Despite not being able to easily pick out the best part of her day, Jones likes her job. She said that all shifts go pretty smoothly. Jones also insisted that she likes cleaning, a major part of both her employment and home life.

“That’s all I do,” Jones said. “I will clean up your house—if I go in there and see something out of place…it’s just a habit.”

Her other passions include home décor and event planning––which, Jones has to admit, is more fun than cleaning.

“My favorite are birthday parties,” she said. Her own had a luau theme.

“I did tiki torches, flamingos, I even ordered a detailed luau cake with a grass skirt and leis,” Jones said. “It was beautiful.” 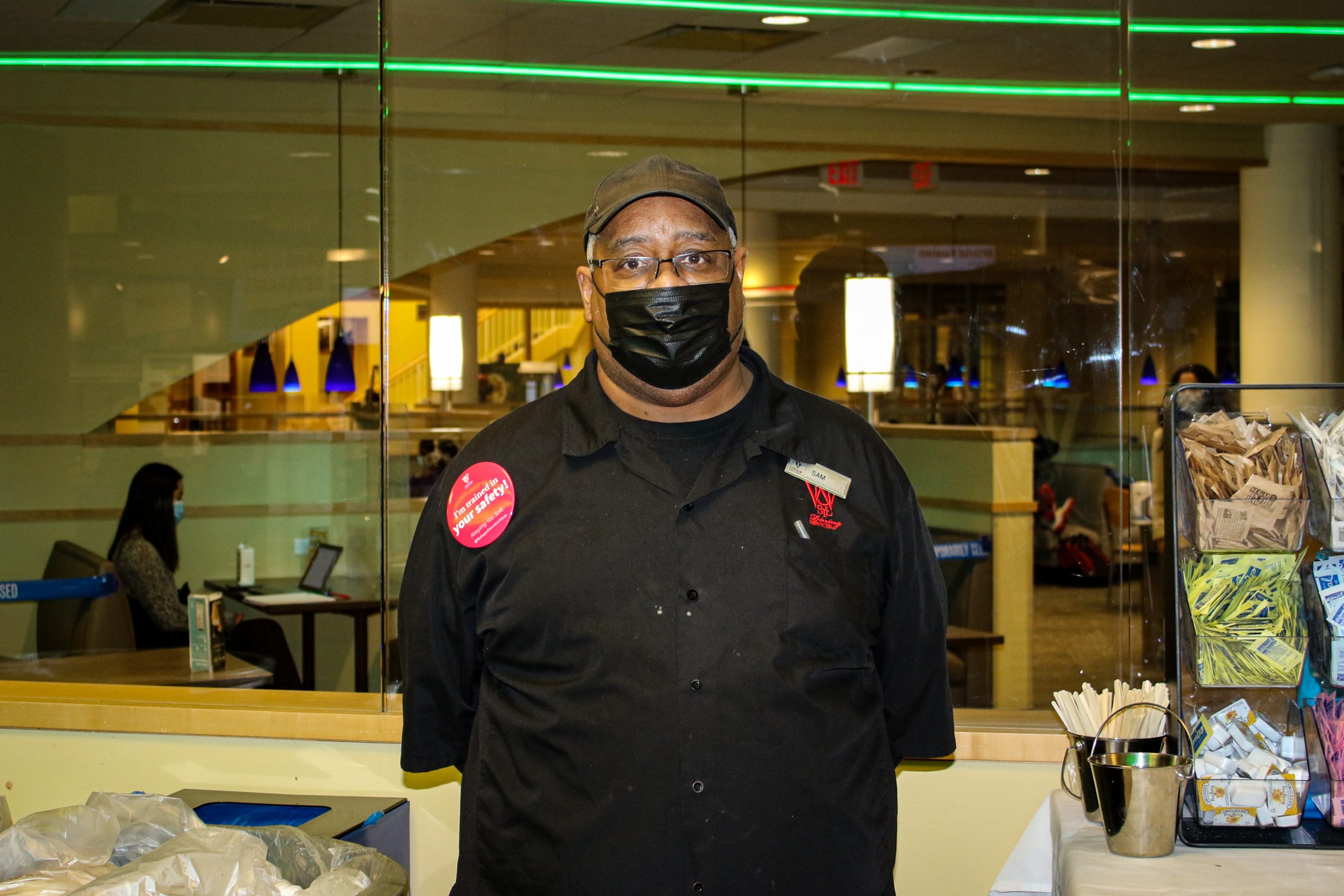 During his 13 years on the job, Sam Keeper has experienced his fair share of “Thirsty Thursdays.” He has seen countless half-and-half boxes littered on the floor and countless little ketchup packets left on the table. The worst thing he has seen, he said, is throw up on the floor.

But the Bear’s Den isn’t like that anymore. Not during the pandemic, at least. Roving around with his two plastic trash cans, Keeper has found less and less trash to collect this school year. The Bear’s Den is clean like he’s never seen it before. That’s because there are fewer people, fewer frat parties and fewer group eating sessions. It has made Keeper’s job a little easier, but that has come at a cost––his hours have been cut. He used to work the six p.m. to three a.m. shift. Now, he just works from five p.m. to eleven p.m..

“When I get there it’s kinda busy. But it hasn’t been busy like old times. It’s still nice,” Keeper said. “But I wish I could get my hours back.”

In place of those hours, Keeper has watched a lot of Westerns (“I’m an old movie guy”) and practiced his skills on MLB the Show (“I’m playing on rookie, man. Because them other settings, I wouldn’t stand a chance.”) Most importantly, however, he said the shortened hours have allowed him to attend more of his son’s football functions. His son is graduating from high school this spring, on his way to Southeast Missouri State on football scholarship as a defensive end. But it’s not his son’s athletic accolades that make Keeper’s eyes water on a linoleum walkway in BD––it’s his 4.0 grade point average.

“That kinda made me cry, man,” Keeper said. “You know, I’ve been taking him to football all of the time. It paid off for him. He did the hard work by keeping his grades up.”

Even though Keeper has spent more time at his son’s football games, the pandemic hasn’t messed with his pre-work routine. He still gets to work 30 minutes before every shift. He still grabs a cup of coffee upon arrival. He still relaxes in the break room before he even touches any trash cans. And pandemic or no pandemic, Keeper has no intentions of changing his routine––or anything about his job.

“This is the best job I’ve had. It’s less stressful,” Keeper said. “I’ve been here going on 13 years…They’ve asked me to do other jobs, but I like out here. I like my freedom out here with the kids.”

By the way Delissha Harper scans items and swipes cards at Paws & Go without looking, you can tell she’s been working at Wash. U. dining for a long time. Five years, in fact, at Bear’s Den, Stanley’s Sushi, the Village and Whisper’s Café.

Harper enjoys the bustling activity at the Bear’s Den, where the chatter and laughter of students can be heard at any time of day. But even when Harper gets off work, often around midnight, she still has work to do. She still has to prepare the next day’s dinner for her two children, ages 11 and one. On this night, she’s going to make boiled chicken and egg noodles. Harper doesn’t like cooking, but her eyes light up when she talks about the family that she’s working hard to feed. Aside from the kids, Harper has a fiancée of six years, Ronald.

“We knew each other since elementary school, and we went to high school together,” she said. They lost contact after graduating, but Harper was surprised to meet him again at a bar in 2015.

“He was in the army and had just come back. He was way skinnier than I had seen him from last time,” she said. Though they planned to get married this year, COVID-19 threw a wrench in their plans. They’re now hoping to have their wedding on Sept. 25.

The ceremony will take place at his family’s church, with only relatives present since the gathering must be limited to 100 people, socially distanced.

“I have a very small family, but his family is huge. It’s nerve-wracking because you have to get to know everybody, and I don’t remember every name,” Harper said.

Ms. Donna misses her babies. She can’t hug them through the plexiglas, she can’t see their smiles behind the mask and she can’t hear lengthy updates about their lives at the register. Between everything that has changed during COVID-19––the shortened hours, the smaller crowds, the stickered floors––Donna Grice, a cashier at Bear’s Den, misses her surrogate South 40 family the most.

“They gotta be in and out. I’ll be glad when this is over so I can hug my babies,” Grice said.

From inside her fortified plexiglas hut, Grice, a nine-year vet of dining services, hasn’t been doing much hugging lately. Actually, more times than not, Grice has found herself telling students to back it up, and then back it up some more.

“I think some of them don’t understand how serious this is,” she said. “I keep telling the kids sometimes––six feet! You know, I keep telling them that all the time, and then some of them look at me and give me a little whatever face. And I don’t care, I’m gonna keep saying it. Social distance.”

Coming to work during a pandemic used to stress her out––all of the students, all of the talking, all of the different ID cards. But, after receiving the vaccine, she doesn’t feel that way any more.

“I used to be more anxious, but now it’s better to even come inside the building,” she said. “And then with all of the kids getting COVID and not doing the right thing––some of them. But it’s getting better.”

To keep herself safe and stylish, Grice has a rotation of 15 different masks that she sports. On this day, she wears one that looks like the stars. On other days, she’ll brings out the “bling bling one.”

But Grice is ready to throw away all of her masks. She is ready to talk with her babies again. And in order for that to take place, some things need to happen.

“I want the kids to be very, very careful,” she said. “Social distance, and maybe it’ll be over.” 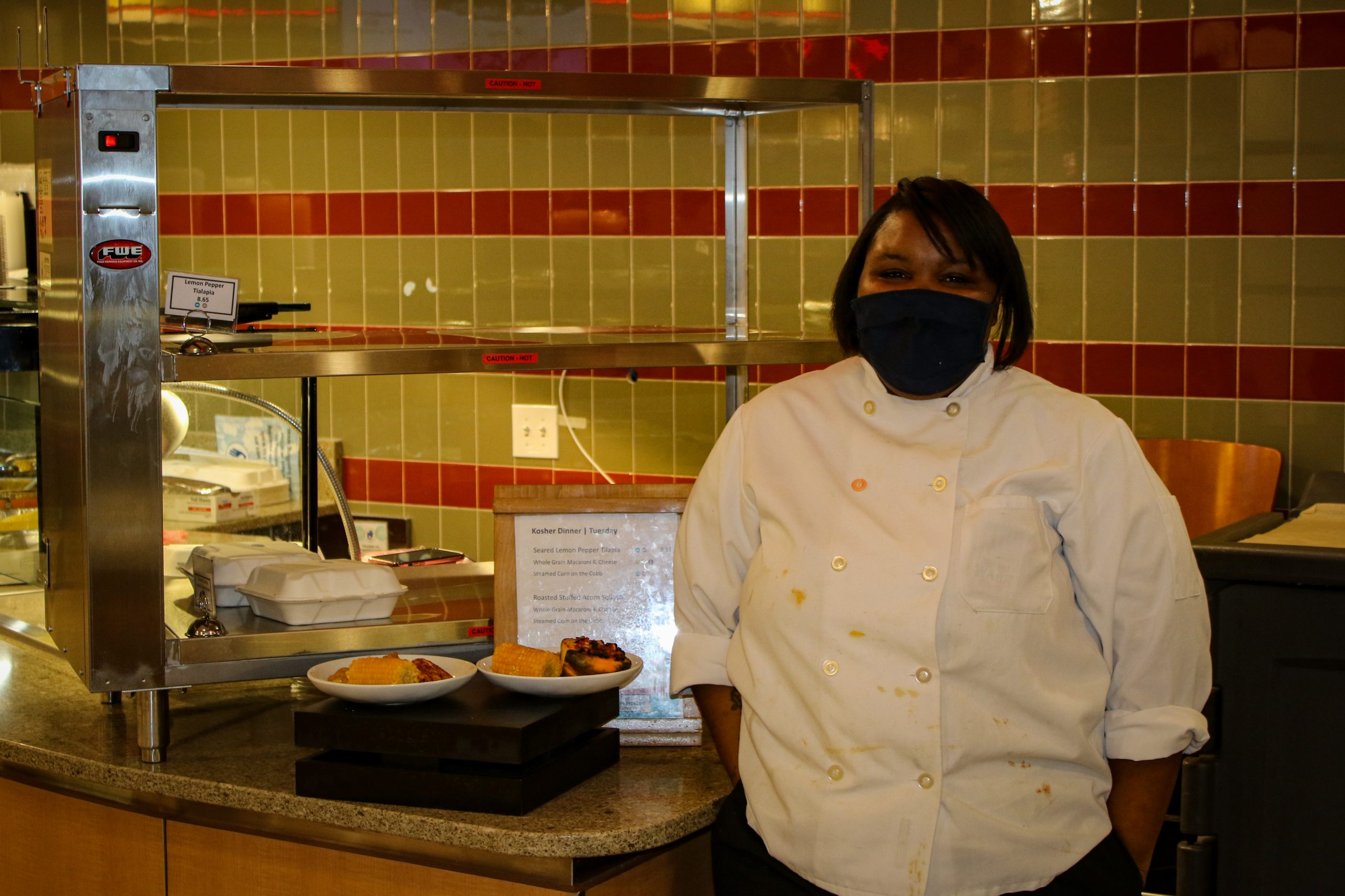 If there’s one thing kosher chef Hollee Brooks wants you to know about her job, it’s that the food takes time. They don’t pull premade meals out of the freezer, she said. No, these meals require energy, attention and lots of seasoning.

“Even the smallest things take the most preparation,” Brooks said.

Take spaghetti and meatballs for example. Pretty simple, right? Not so much. The night before they even serve it, Brooks said she starts cooking the meatballs.

“It’s one of those things where it takes a lot of ingredients and a lot of prep time,” Brooks said. “And even though it doesn’t seem like it takes that much, it is usually like a two-day job.”

The prep time doesn’t bother Brooks too much. Even though she has only been at the kosher station for a year and a half, Brooks has all of the recipes down pat. So much so that she makes some of the meals, like roasted potatoes and fettuccine alfredo, for her three kids at home.

That is, when they’re not playing video games as a family. In Brooks’ house, there are a lot of video games being played these days. Super Mario Bros is the biggest hit right now, but they fit in time for Madden and NBA 2k. They have plenty of game systems to play the games, including a Playstation 4, Playstation 3, Nintendo Switch and Nintendo Wii.

For Brooks, this has been a silver lining of the pandemic. Shortened hours have meant more time with the kids––and more time for the video games.