Getting locked out of your dorm is a freshman year tradition. But some lock-out instances are worse than others, and the complications of COVID-19 this semester have only added to the lock-out possibilities. These four freshmen, each with their own unique lock-out experience, share their stories from the fall 2020 semester.

For freshman Folakemi Shofu, it all started at 5 a.m., when she decided to warm up her Thai takeout food from the night before. Shofu entered the kitchen next to her dorm before returning to her room, only to find that it was locked. What started as a quick early meal ended four and a half hours later with someone letting a cold and shivering Shofuback into the Umrath building.

After realizing that she had locked the room key inside her room, Shofu, with no mask and no jacket, decided to go down to the kiosk. But upon returning to the entrance of Umrath, Shofu realized that she was not only missing her room key. She was missing her Wash. U. ID card. She could not get back into Umrath. Desperate, hungry, and cold in the 50 degree weather, Shofu walked around the Umrath building, hoping someone would see her and let her back inside.

“I went to a bunch of places. Because … what if someone comes out this entrance and then they come out the other entrance? So at first, I waited in the front, looking into the window,” Shofu said.

After a few hours passed by, Shofu, without a coat and phone, found refuge in the kiosk replacement center, where she searched desperately for any source of entertainment to pass the time. It was there that she discovered a small TV from inside the building. It was showing breaking news from CNN. However, instead of the normal depictions of reporters and discussion panels, the screen was completely white, and only a string of small text ran along the bottom of the TV.

After two and a half hours of reading about the aftermath of the 2020 election on the news ticker, watching a few people pass by with breakfast food and glancing at the entrance of Umrath, Shofu finally spotted a fellow resident in front of Bear Necessities. After being let back into the building, Shofu was finally able to eat her leftover food, which Shofu explained was still good, but not worth the four and a half hour wait.

Out of all of the errors Shofu made –– forgetting a mask, not wearing a jacket, leaving her phone and both of her keys –– Shofu’s biggest regret is leaving the building in the first place.

The ‘Wall of Shame’ 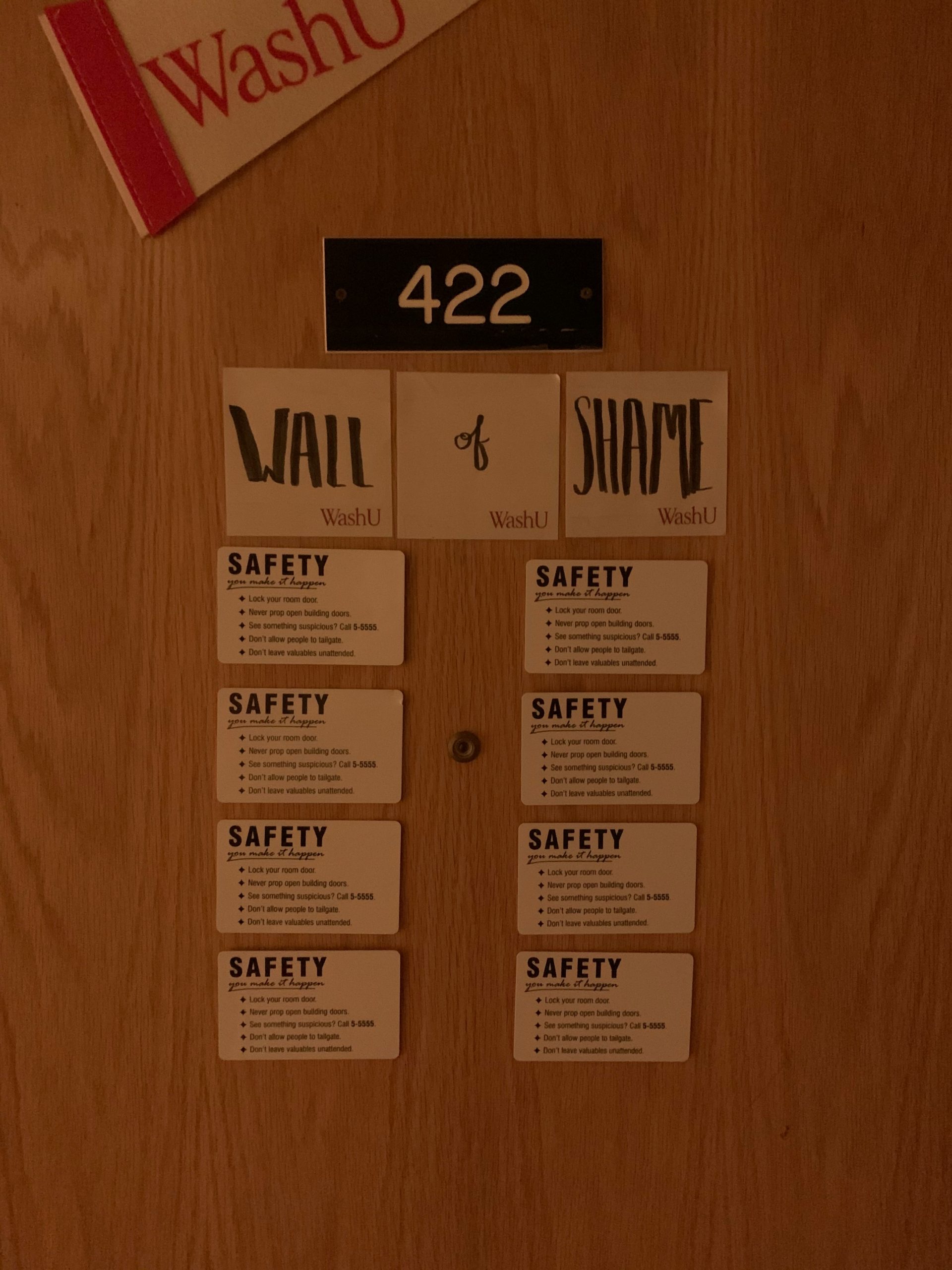 Most students tend to throw away their old room key once they purchase a new one, but Petrikin, confused about the process, ended up keeping all of her old keys.

“I didn’t realize that only the new one works, so I kept the old ones because I thought, now I’ll have two, that’s nice,” Petrikin said. “And of course, that ended up with me getting locked out again because I used the wrong one.”

Left with a stack of old key cards, Petrikin, inspired by her suitemates who were hoping to put up some door decorations, created her “Wall of Shame” display.

Though each key card contains a unique story, some lock-out experiences stand out from the rest. One instance Annika recalled involved a busy Friday night, gray bunny slippers and a five minute walk through the South 40 from her dorm in Hurd.

“I had to walk in slippers all the way down, and it was a Friday night so everybody was out while I was fully in my pajamas,” Petrikin said. “That was pretty bad.”

In the end, one can learn from experience, even though for Petrikin, it has taken about nine separate instances for those lessons to finally sink in.

“Definitely once you go out in the cold in your pajamas, you’ll remember a lot better,” she said.

After taking a shower around 8:30 p.m., freshman Nick Cloney accidentally closed the inner door to his dorm. To his dismay, the only items he had with him were a pair of pants and his phone. That’s all he brought with him when took the ten minute trek from his dorm in the Danforth building to the card replacement kiosk –– shirtless, shoeless, and maskless.

“[People] just let me walk by because I was clearly dealing with something, and I was just sort of laughing the whole way,” Cloney said.

Just one week into college, he left an unforgettable first impression on many of his new hallmates upon returning to his building.

“Fortunately for me, I had not yet met any of the people in my dorm. So naturally, when I came back, everybody was in the hallway, and I got to make my first introductions to a lot of people with no shoes, no shirt, and no mask on,” Cloney said.

Despite the potential for embarrassment, Cloney handled the situation with humor.

“How do you make yourself seem like you’re not a gigantic idiot from locking yourself out of your room completely accidentally? And so I was just like, smile and act like you’ve been there before, and hopefully you’ll never be there again,” Cloney said.

While Cloney feels that he was not necessarily being irresponsible, he has still made a few changes to his daily routines. “Contingency plans,” he called them.

“I keep my door stop in the door constantly now, and I took out a raincoat and a spare mask and a spare pair of shoes just in case,” Cloney said.

With these precautions, it is unlikely Cloney will be caught in such a dicey lock-out situation ever again. But the experience of the same shirtless, shoeless, and maskless trek after being locked out in the shower is still a possibility for other WashU students. Cloney has some advice for any other students who may find themselves in the same precarious situation.

“Smile and wave, it’s not the end of the world,” Cloney said. “It’s a good story, hopefully; if not, then just learn to not do it again.”

The tale of the broken kiosk

In most lock-out situations, simply buying a replacement key is enough to make it back into the dorm room and avoid as much humiliation and frustration as possible. But what happens when the replacement key doesn’t work? Freshman Ankit Chhajed went through not one, not two, but five keys before he got back into his dorm.

At around 2:30 a.m., Chhajed returned to his dorm, only to realize that he had left his room key inside his room. Exhausted, he journeyed to the card replacement kiosk and bought a new key, but that key did not work. Thinking he had just put in the wrong information into the kiosk, he went through the process again, this time bringing a fellow floormate with him. Even with the extra help, the next key card did not work either. Despite the repeated failures, Chhajed continued to purchase new keys.

After buying a total of four new keys and spending $20 on “useless squares of plastic,” Chhajed decided at 4 a.m. that it was finally time to find some outside help. After calling WUPD, Chhajed was informed that the kiosk had, in fact, “not been working all day.”

Chhajed expressed frustration that the kiosk, which had been broken the whole time, had not been labeled as “out of order.”

“Literally just say ‘out of order,’ put a little post-it on, and I wouldn’t have wasted an hour and a half of my life at four in the morning,” he said.

After WUPD made a fifth and final key for Chhajed, he was finally able to fall asleep around 4:30 a.m. While he was able to finally return to his dorm room, Chhajed still had to pay the $25 fine for all the replacement keys, despite the fact that he was unaware the machine was broken.