Sleepless nights and endless emails: Behind the scenes of student campaigners before Election Day

With all eyes turned to the presidential election, stress levels on the Washington University campus are high. Behind the scenes, however, are students and alums working overtime on campaigns, frantically pushing through the last week before ballots start to roll in. From the class of 2019 to class of 2025, these three former and current Wash. U. students are impassioned, hyper-focused and often sleep-deprived. Until Nov. 4, they will strive to keep up their drive and hold on to their sanity, all the while wholeheartedly believing in their different candidates and causes.

Balancing school and the election

Every morning, sophomore Emma Singh wakes up at 5 a.m, what she calls an “ungodly hour,” to the soothing sound of National Public Radio and the gentle glow of her natural light alarm clock. Then she gets to work.

Though she lives in St. Louis, Singh is working for the Texas Democratic Party, which covers all races in the state, including, of course, Joe Biden’s campaign for the presidency. She works in analytics, where her job involves a project gathering data on campaign finances and assisting with fundraising, money disbursement and volunteer engagement.

If that seems like a lot, that’s because it is —and Singh’s schedule pays the price. She’ll do schoolwork from 5:30 to 8:30 a.m., then grind through campaign-related work, emails, calls or meetings, until four or five in the afternoon, then switch back to classwork until 9 p.m. or so.

“Right now I’m struggling to remember the last free weekend I had —I think it was before school started,” she said.

Even throughout the exhaustion, Singh is fully committed to her job. Stretching herself to the limit isn’t new for her either. Singh acquired her first political job in eighth grade when she interned for congressman Bill Pascrell —a position normally reserved for high school juniors.

“I kind of just had a lot of balls,” she said. “They kept telling me I was too young. So I would email them a lot, to the point where it could be considered harassment.”

Her persistence paid off and after an interview, Singh became the youngest intern the office had ever employed.

That job snowballed into a laundry list of others, including advocating for Medicaid expansion in Missouri and working for the National Women’s Law Center, the ACLU and countless nonprofits and campaigns. Her first job is also where Singh developed a practice that she still uses today.

From a young age, Singh knew that opportunities weren’t going to be handed to her, and instead, that she would need to get her foot in the door by herself.

“The ability for me to want to get in the door and be curious, and advocate for myself and my skill sets and my intelligence was probably the greatest thing I could have done for myself,” she said.

As a self-described “recovering perfectionist,” she’s allowing herself “a little bit of grace,” she said. “This is what I want to do, so I’m doing it and I’m really proud of myself for doing it.”

At the end of the day around 9 p.m., Singh pauses for a few moments of relaxation. She’s a fan of TikTok (she’s on hippie/granola or ‘Christian girl autumn’ TikTok), journaling and reading. She’ll shower, talk with a friend on the phone and then set her natural-light alarm to do it all over again the next morning.

‘The off years are for self-care’

It’s just before 8 a.m. and Drew McPike is probably on the road driving the 50 minutes from his small Missouri town to Axiom Strategies, a conservative think tank in Kansas City. He’s playing 1960’s vocal hits—Frank Sinatra, or maybe Billy Joel. It’s a brief moment of peace before a long, adrenaline-filled day of emails and reports, and McPike is enjoying it. 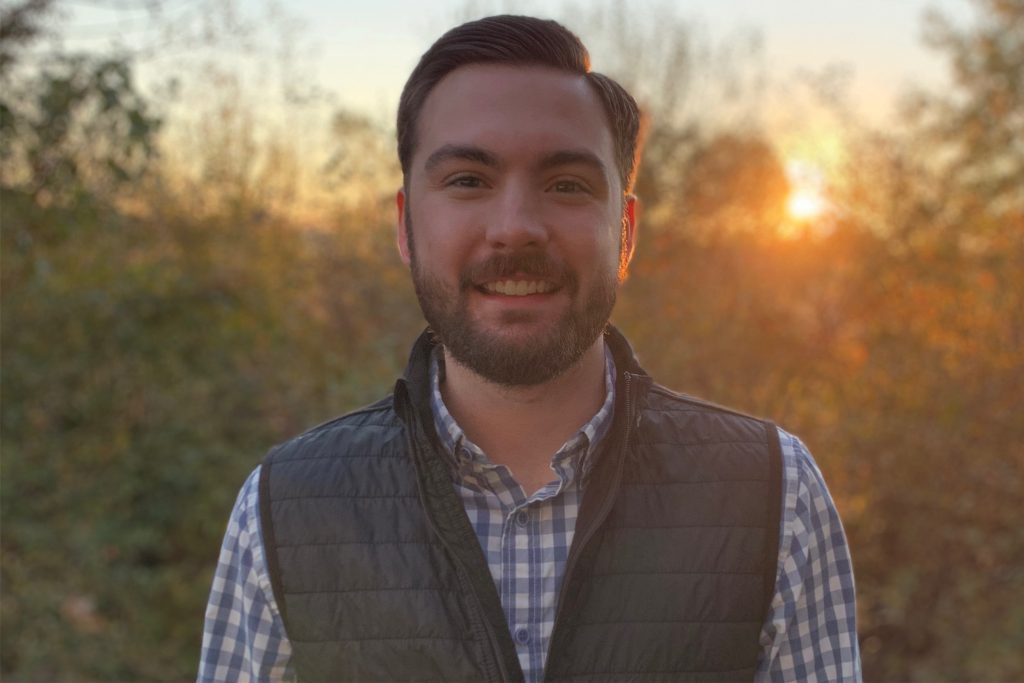 “I like to drive, and my boss knows I’m in the car so I don’t have to respond [to email] immediately. At AxMedia we’re very on the ball,” said McPike, who graduated from Wash. U. in 2019.

In the throes of election week, the energy at Axiom, which provides expert consulting and services for campaigns, is at an all-time high as they cram for countrywide elections soon coming to a head.

McPike’s job in the media branch is to quantify the number of candidate advertisements and track how much is being spent in markets and what medium it’s being spent on. He recently became the “digital lead” due to a rearrangement in company staff.

Since the work is so numbers-based, McPike finds that aside from attracting him to the company, personal political ideology doesn’t play a big part in his everyday schedule.

“It’s not something where even if I had a disagreement with something going out, I would be in any position to change it,” he said.

The lack of political negotiation, however, doesn’t bother McPike.

“At the end of the day I’m working for the party, so I don’t bring my personal beliefs into it at all,” he said.

“I think any time you’re challenged in the way you think, you come away with new beliefs. I was obviously challenged a lot, and I’m very thankful for that,” he said.

In fact, McPike admits that he is now seen as the “family liberal” due to his slightly less traditional beliefs.

“I like to identify myself as a Mitt Romney sort of Republican,” McPike said.

It was the atmosphere on campus during the 2016 election, his freshman year at Wash. U., that encouraged him to pursue politics.

Fast-forward four years, and McPike is again in the midst of the federal election buzz, though this time, with a heavier load on his shoulders. McPike often works 8:30 a.m. through midnight, with a slight lull in the middle of the afternoon. Some days, however, are worse.

“Mondays are really bad. It would be like 9:30 p.m., and I would be drinking coffee,” he said. “Last Monday I sent my last email at 2 a.m., and couldn’t fall asleep until like 3:30 because I was absolutely wired.”

Email, the company’s main form of communication, indicates how busy a night will be for McPike. Halfway through a 30-minute interview, McPike stops mid-sentence, his attention snapped up by a new notification.

“Hang on, sorry, this one is urgent,” he said. A few moments of frantic typing, and the report is sent off, crisis averted.

“It’s become where I’m a little robotic about it. Sometimes I’ll send the email and not even realize I just sent something,” McPike said. Despite the long night ahead and the longer ones looming in the future, McPike likes his work. Rest, he explains, is for after the elections.

“The off years are for self-care,” McPike said.

Many graduating high school seniors take gap years, but it’s not often that one’s gap year coincides with both a pandemic and the United States Presidential election. But for Washington University class of 2025 Julia Borchers, the timing worked out just right. Borchers had always kept the possibility of working for a Democratic national campaign in the back of her mind, and the uncertainty that surrounded her freshman year due to COVID-19 gave her the final push to defer.

“I wanted to have as much of an impact as possible, this was definitely the most important campaign I might ever see,” Borchers said. “I didn’t want to miss that opportunity.”

Borchers lives in California, but she is working as a fellow for the Biden campaign in Michigan. Far from focusing only on the presidential candidates, she is also an intern for Congressman Eric Swalwell and a staff member for a local California mayoral candidate, Jerry Pentin.

“I [felt like] since I couldn’t vote I couldn’t do anything, and so I wanted to change that and feel like I was doing something substantial,” she said.

Far from being idle, Borchers works a full 40-hour work week, bouncing between training volunteers, calling, phone banking and organizing fundraisers. Despite her exhausting schedule, Borchers’ energy is palpable through the Zoom screen, waving her hands as she describes her emotional state leading up to Election Day.

“Having a personal stake in all of it is extra stressful,” she said. “Hillary Clinton lost Michigan by two votes per precinct, and so having that tiny of a margin that we’re working with is terrifying.”

Win or lose, Borchers predicts she’ll feel at the very least like she contributed to the outcome she wanted. Even though a loss at the federal level would be devastating, Borchers is determined to feel proud of herself.

“I did everything I could, I made every phone call I could and that will be that,” she said.

Of course, however, wins in all of her campaigns would be preferable. She’s especially stoked for the mayoral race, since she’s campaigning for the underdog in the race.

“That’s the one I’ve really gotten involved with since it is smaller and they let an 18-year-old do more,” she said. “[And] knowing that my town made the educated decision and didn’t go for the really easy option, that would mean a lot for me.”

Borchers is looking for the light at the end of the tunnel. When the election season finally ends, she will take part in a fully immersive, two-month backpacking excursion across the Pacific Northwest along with a small group of other gap-year students.

“I’ve been in this super fast-paced, constantly changing, adrenaline mode, and so two months outside sounds like a dream,” she said. “[I] want to embrace some silence.”