The story of WU’s self-isolation dorms

Sophomore Carly Abramowitz’s stay in quarantine housing was “like a fever dream”: a time filled with attending classes virtually, walking around her room and throwing balls at the wall.

Abramowitz was sent to quarantine housing for 14 days after spending time in close contact with friends who ended up testing positive for the virus. Sophomore Ashley Weir was one of Abramowitz’s friends who tested positive.

Weir was put into isolation housing on a Thursday morning in September and spent the next week and a half living out the “longest ten days” of her life. 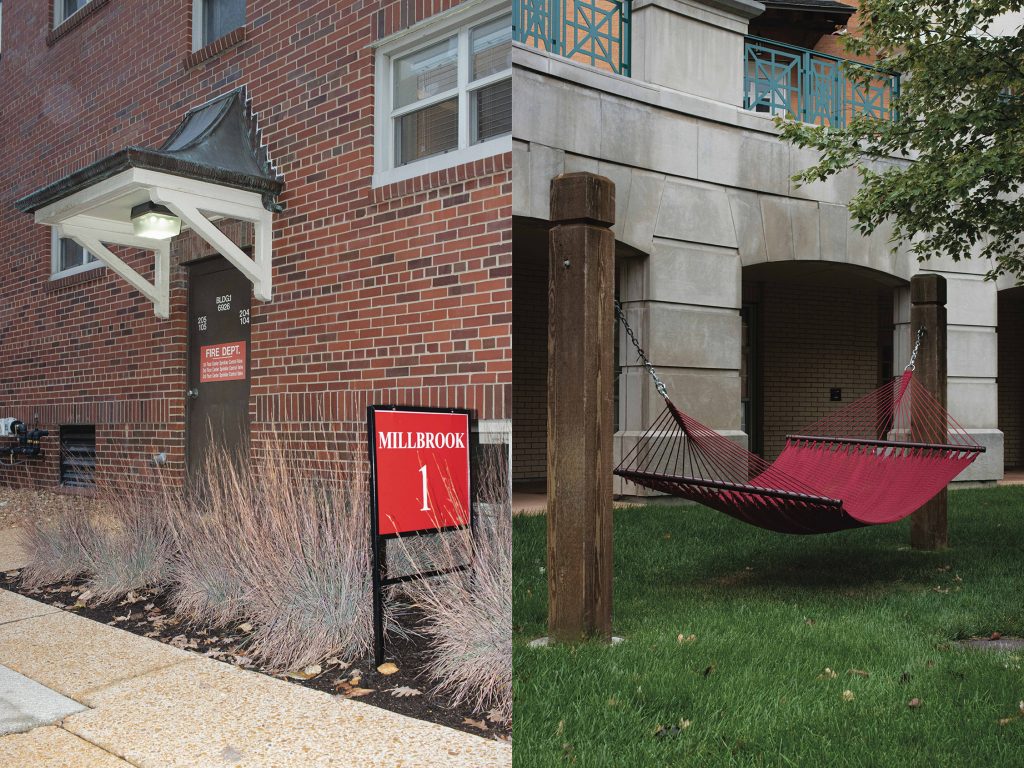 Students who come in close contact with someone who has the virus are sent to Nemorov (right), while those who test positive themselves are housed in Millbrook 1 (left).

Certain aspects of isolating, including the length of isolation and which dorm students stay in, is dependent on whether or not a student receives a positive test result.

Students, like Abramowitz, who are deemed to have been in close contact with an infected individual are required to quarantine for 14 days, regardless of whether or not they test positive. Dr. Cheri LeBlanc, the Executive Director of Habif Health and Wellness Center, wrote that this policy is in place because it can take 14 days to develop symptoms after being exposed to the virus.

Students who do receive a positive test result can be released from isolation after the following three criteria are met: It has been ten days since their symptoms began, they have had no fever for 24 hours and their symptoms are improving.

If infected students live by themselves, or exclusively with other people who also test positive for the virus, they are allowed to quarantine off campus. However, “for off campus privately housed students who are unable to isolate due to shared bathrooms or other considerations, we also move them to on campus quarantine, P.U.I [Person Under Investigation] or Isolation Housing,” Kawanna Leggett, the executive director of residential life, wrote in a statement to Student Life.

This topic of food and refrigeration was one of the biggest issues that students pointed out. Students quarantining receive a knock on their door three times a day to indicate that a meal has been left outside their room in a brown bag.

Abramowitz noted that dinner for her came at 5 p.m. which was earlier than she normally eats so her food would often no longer be warm by the time she wanted to eat.

She said that having a refrigerator would have helped her isolation period.

“I literally would have just brought frozen meals and things I could cook or produce that I could keep in the fridge,” she said. “Something like that would have improved my quality of life so much more.”

Abramowitz added that she would have liked an option to choose her meals at the onset of the quarantine period, which she said friends at other schools were able to do. “They could do more to improve the little things about quality of life in there,” she said, “because it is such a destitute situation.”

At the beginning of their time in quarantine or isolation housing, students are provided with a pulse oximeter and asked to bring the thermometer they received when school started. A nurse from Habif regularly contacts students to check in on their vital signs and any other mental or physical health issues they may be experiencing.

Weir noted difficulties that she had with Provident and with Habif mental health services. Weir said it was frustrating that the therapists at Provident were unable to effectively help her cope with her situation.

“I was really just frustrated in the moment because I wanted people to, I don’t know, fix something for me that couldn’t be fixed,” she said. “You just have this whole ‘I hate the world’ mentality sort of thing, so it’s easy to get frustrated with people who are struggling just as much to try to give you the resources that you need.”

“I think now that I’m outside of it,” she continued, “I do understand that what we’re dealing with is so new and that it is hard to give people maybe the questions that they’re looking for in the moment.”

Weir also noted difficulties with Habif’s mental health care system. She detailed repeated experiences of being sent to voicemail and having difficulty getting on to the phone with a therapist. She said that a large reason this issue came up was because there were often only one or two triage nurses on call.

“Wash. U. can’t tell me that they don’t have enough money to pay for someone else,” Weir said. “I think about the difficulties that I had [as] one of the 10 cases on campus. Imagine if it had been much more than that. I can’t imagine. It would probably be a mess.”

While Weir found the mental health system to be unsatisfactory, she said that the physical care she received from Habif for virus complications was positive.

“I’m very grateful that I was able to receive the physical care that I needed from the University, because it’s the same care that probably could have saved the lives of my own relatives,” said Weir.

Students dealing with physical ailments are able to access Habif through a sidedoor, Abramowitz said. Besides going to Habif for health appointments, students are not allowed to leave their room for any other reason. Abramowitz noted the toll that this restriction had on her mental health.

“Laying outside for like 15 minutes would have done so much for me personally,” Abromowitz said. “I’m a very endorphin-oriented person. I love to run and work out and just be outside, and it was really, really hard for me in that respect.”

Weir also talked about the difficulties of having no time to spend outside and only limited access to fresh air. “My windows were locked except for one small one in the living room, and even that one only opens to a certain extent. You just feel so trapped and claustrophobic.”

Abramowitz emailed administrators to ask if she could spend any time outside. She said they wrote back that there was no way for her to be let outside and instead gave examples of other ways to cope with boredom.

LeBlanc cited the instructions of St. Louis County as a main reason for why students are not allowed time outside. It states that people in multiple person dwellings should not use common stairways or elevators and should not walk in their neighborhood.

“Since there are no private egresses from our Wash. U. res halls, getting students in quarantine to outside requires them to travel in hallways potentially utilized by other residents and staff,” LeBlanc wrote. “If we are able to learn more about quarantine procedures and communal living shared spaces that would allow for risk free access to the outside and how to effectively cordon off spaces on our open campus we would be open to revisiting this issue.”

While students are not allowed to go outside, they have found creative ways to connect with the outside world.

Thomas Brounk, the Director of Mental Services at Habif, noted that humans are “social creatures” and that students quarantining should be more intentional than normal about reaching out to people in their social network in order to feel connected with others.

A friend of Weir’s invited her to a family Rosh Hashanah dinner where they propped her up digitally to take part in the meal. “I didn’t even really have the appropriate things to eat, but I was still there which was really nice,” she said.

Abramowitz said that she frequently Facetime’d with friends to stay connected, and used Netflix Party to watch movies with a friend of hers who was also quarantining.

In addition to connecting virtually with friends, Abramowitz took up some unexpected pastimes.

“I had a ball. A bouncy ball. I would just throw it at the wall and catch it 30 times in a row,” she said. “I did a lot of drawing. I did a lot of random activities I haven’t done since I was probably like 11 years old, because you can only watch Netflix for so long or do your homework for so long.”

Abramowitz advises self-isolating students to bring games and things to draw with. “Definitely bring stupid activities that you wouldn’t think you’d want. You might actually use them.”

The “Isolation Wellbeing Plan” given out to students at the beginning of quarantine recommends employing distractions like coloring books, craft supplies and knitting to help with mental health.

Weir said that the school could have given more of those suggested coping mechanisms to students. “I don’t have board games, I can’t knit, I don’t have all that stuff,” she said. “You find out that you have COVID and then you’re supposed to go quarantine.”

In addition, Abramawitz said that bringing snacks to one’s quarantine dorm is one of her main pieces of advice.

Brounk also shared advice for students required to quarantine. “Reduce the expectations that you have of yourself,” he said. “I think if you go into something like that expecting that it’s just a usual routine or that nothing’s going to change, that can actually impair or get in the way of you having some compassion for yourself.”

And he wants students in quarantine to recognize that their situation will eventually end.