‘We’re plugging away’: How the Prison Education Project keeps working during the pandemic

Trevor Sangrey normally runs discussion-based classes. This means small group conversations, mid-semester presentations and witnessing the “funky dynamics” that take place within a classroom setting. But Sangrey couldn’t teach their normal discussion based class this past semester. Instead, they had to teach class through pre-recorded videos, a 500-page course reader and loads of emails.

“I don’t like lecturing,” Sangrey says of their class titled “U.S. Social Movements.” “I thought making those videos was hideous. I’d much rather talk to someone than write emails. Emails also are hideous.”

Sangrey, who is an ​assistant dean of Arts & Sciences and lecturer in Women, Gender, and Sexuality Studies, didn’t have a choice. That’s because they were teaching the 2020 summer semester at Missouri Eastern Correctional Center (MECC) as a part of the Washington University Prison Education Project (PEP).

People hug during the 2019 Washington University graduation ceremony at Missouri Eastern Correctional Center. It was their first in the history of the Prison Education Project.

In a normal year, PEP instructors make the 35-minute drive southwest to Pacific, Mo. where they conduct in-person class, put together study hall sessions and even organize clubs. In lieu of other work, the 35 students enrolled in the program spend their time working towards associate and bachelor’s degrees. “It was just like being on the campus of a university,” said former PEP student Kevin Hammerschmidt, who is now finishing his degree at the University College.

But when COVID-19 hit, the prison completely shut down. The students couldn’t see their families, let alone teachers from PEP.

Luckily, every incarcerated individual at MECC, and in the Missouri Department of Corrections, receives a JPay tablet to download music, play games, watch videos and read books. PEP students also have access to a Canvas-like system called Lantern (“It can do one-tenth of what Canvas can do,” says PEP Co-Director Robert Henke), which was first rolled out in the fall of 2019. With this platform, teachers have had the ability to upload videos, write assignments, administer quizzes and email students.

PEP organizers initially hoped Lantern would complement their in-person classroom work. But shortly after the emergence of COVID, the tablets became their main source of learning–making PEP unique amongst other prison education programs across the country. Without the same technology, these programs were forced to mail packets of coursework to students. Some have paused their programs altogether.

“I don’t mean to brag,” Henke says, “but very few other college prison programs were able to continue classes… we sort of have been the model in a way.”

Even with the tablets, PEP has faced a mountain of challenges. The tablets have limited storage space, requiring professors to record shorter videos. Emails can only go one-way, making a discussion board impossible. And students do not have access to WiFi, forcing them to upload their content through the sole kiosk machine that resides in their 60-person wings. As a result, a simple email exchange may take days to finish.

Despite the struggles, Hammerschmidt has seen some positives in the fully virtual semester.

“I think that if you think about it, there’s guys who are using these tablets who have never even been on a computer before,” he says. “They don’t know what a smartphone is. They’ve been locked up for the past 20 to 25 years and they had no access to that. They’re learning some computer skills through the tablets, they’re learning how to navigate through them.” 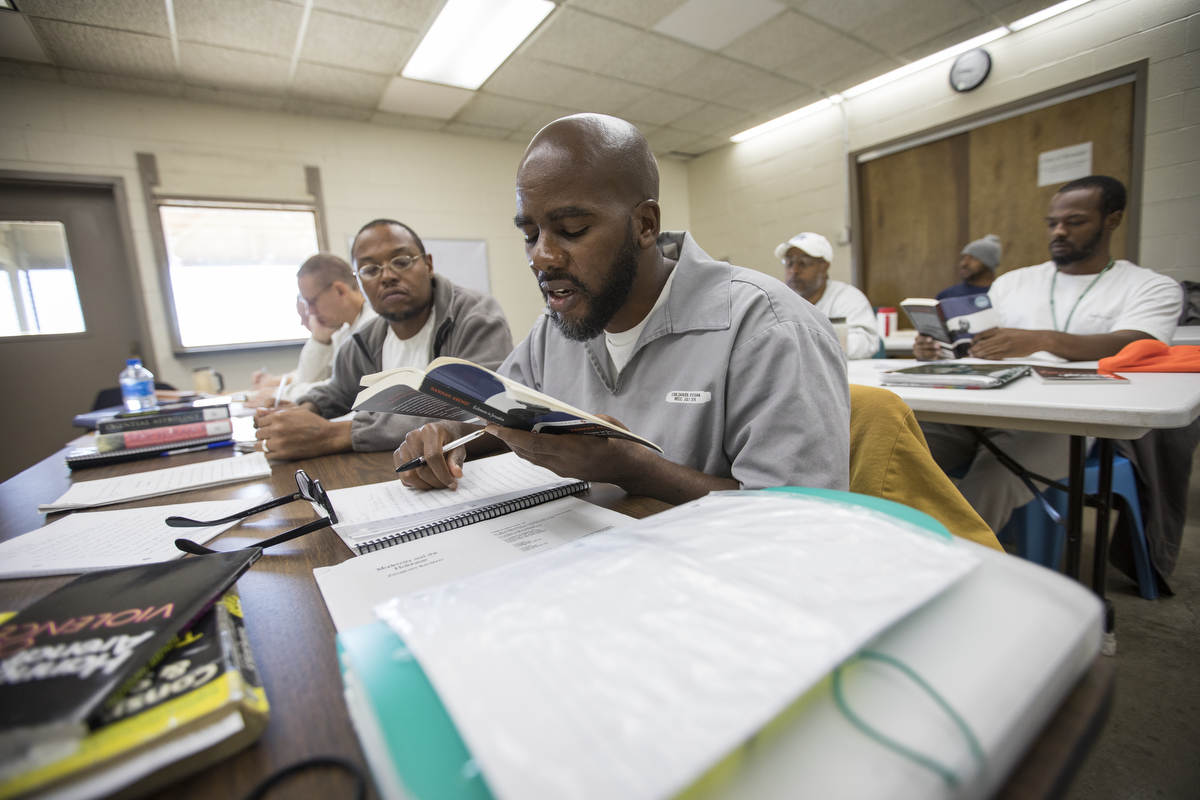 A student in the Prison Education Project reads a book during class. Since the virus, students are receiving their schoolwork through course readers and tablets. Classrooms, like this one, are closed in the prison.

Some teachers, like Sangrey, found creative ways to work around the technology and foster a discussion-based class. Throughout the summer, Sangrey would record two to three videos per week to provide contextual information. Then after doing reading, usually 75 to 110 pages per week, Sangrey asked the students to organize themselves into three or four person discussion groups within the prison.

For each set of readings, a different student served as the discussion leader, recorder or primary source analyst. After each discussion, the students would write up a response based on their given role in that week’s conversation. The small discussion groups worked, Sangrey said, that is, if the students had access to one.

After March, incarcerated individuals at the medium-security prison were confined to their 60-person wings in hopes of halting the spread of the virus. Despite this, MECC still saw an outbreak over the summer. Out of the approximately 1,100 incarcerated individuals, 166 have been infected, in addition to 43 staffers (those numbers are currently down to four and 12 active cases, respectively).

In response, Sangrey had to stay flexible. A portion of the students in Sangrey’s 15-person class could not participate in the discussion groups. Some, for example, lived in wings with individuals they didn’t get along with. To compensate for the lack of discussion, those students had to write longer reflection papers.

Normally, Sangrey made assignments due on Fridays, but they quickly learned that technical difficulties run rampant. Three students in Sangrey’s 15-person class are still finishing up their coursework from August. One was pulled for COVID cleaning duty, while another lost their tablet. Although Hammerschmidt knows PEP is doing all they can to make these COVID semesters worthwhile, many students in the program, he says, have struggled to stay motivated with the lack of in-person contact.

“It’s broken the camaraderie in a way, because they don’t have that classroom experience with the professors who care,” Hammerschmidt says.

“I think it’s a difficult time to be a student in general,” says Narayanan. “And then the added stress of being in a position where you have so little control, and so little autonomy over your circumstances.”

The men of MECC have felt this firsthand during the virus. While they do have masks, many COVID safety supplies, Hammerschmidt notes, aren’t readily available. With shared phones, bathrooms and kiosks, social distancing is practically nonexistent.

Guards often fail to wear a mask or gloves, even when doing security checks, he adds. In late July, there was a reported protest over the conditions. “A lot of guys are saying they don’t even want to go eat up [in the cafeteria], because they’re afraid they’re going to catch it,” Hammerschmidt says.

For these reasons, PEP has no current plans in returning to the prison and further exposing its students.

And for the time being, the professors and program organizers will make it work. PEP has a full six course load for the fall semester. They have their virtual learning system. They have their course readers. And they are continuing to adapt. In March, PEP sent keyboards to their students. They now have access to virtual tutors over Lantern. And they hope that, in the coming weeks, they can set up Zoom in one of the classrooms as well.

“We’re pushing Lantern to the limits, and we’re squeezing everything we can from that thing…. There’s a certain good feeling that we’re plugging away and powering through,” says Henke. “And I think a certain feeling of pride in that [too]. I’m very proud of our incarcerated students for being positive about it.”