The death of Supreme Court Associate Justice Ruth Bader Ginsburg sent the United States political sphere into a tumult this weekend as people sought to honor the storied justice while taking into account her death’s immediate consequences for the makeup of the Court. President Donald Trump announced Monday that he would make a nomination late this week and Senate Majority Leader Mitch McConnell has pledged to vote on the nominee’s confirmation this year.

To reflect on Justice Ginsburg’s legacy and the near future of the Court, Student Life called Lee Epstein, Washington University’s Ethan A.H. Shepley Distinguished University Professor. Epstein is a political scientist whose research has focused on legal institutions and the behavior of judges.

Student Life: There’s already been so much conversation over this weekend about Justice Ginsburg’s legacy, so I’m curious what you think is being left out of that conversation so far.

Lee Epstein: I think there are two legacies here. First is her legacy as a lawyer: What did she do? She worked to upend vast swathes of the law by convincing judges to eliminate gender lines. So there’s that whole kind of equality lawyering aspect to her. And then there’s the court legacy, and I think the court legacy is a little bit different because she served on pretty conservative courts. It was hard for her to make a lot of progressive headway and I think her role on the court was less as an effective disruptor of law—as she was as an attorney—and more as a sort of defender of the left-leaning legal regimes. And that was really challenging on the conservative courts on which she served.

SL: In terms of that second legacy and talking about her role on the conservative courts, how did she go about doing that being a defender of the left? What was her approach like?

LE: In many instances, she ended up dissenting. So you look at the Second Amendment gun cases—she dissented. The voting rights cases—she dissented. Some of the religion cases—she dissented. I mean, it’s not to say that she lost every battle. Certainly during her time, abortion rights stayed intact, affirmative action stayed intact. There were of course the same-sex marriage cases and so on. This is not to say that every case went in a conservative direction or that she was always dissenting or lost every battle. In several major areas of the law, her legacy may be as a kind of great dissenter. If you look at the data, she was one of the top five dissenters on the court since 1953.

SL: Wow. On a more specific level, how have you seen Justice Ginsburg’s impact in your classrooms?

LE: Certainly when I’ve taught law and social change and we spend time on her litigation strategies, I think that the students are—I don’t want to say in awe—but ‘Boy, what she did was pretty amazing,’ is their kind of view: ‘Wow, she really took this on and would not give up.’ So I think they’re pretty amazed at her accomplishments as a lawyer. I’m probably missing things because I don’t teach [Law 508: Constitutional Law] until next semester, but there is one opinion of hers that always elicits conversation in Con Law. And that’s her concurrence-slash-dissent in the Obamacare case. If you read that opinion, Matthew, it’s so clear. It so clearly lays out the issues. She does a much better job, I’ll be honest, in laying out the Commerce Clause issue, in that dissent, than the lawyer for the government did. The students, I think, understand the Commerce Clause argument from her opinion better than from reading the briefs, so that’s certainly one case we spend some time on. 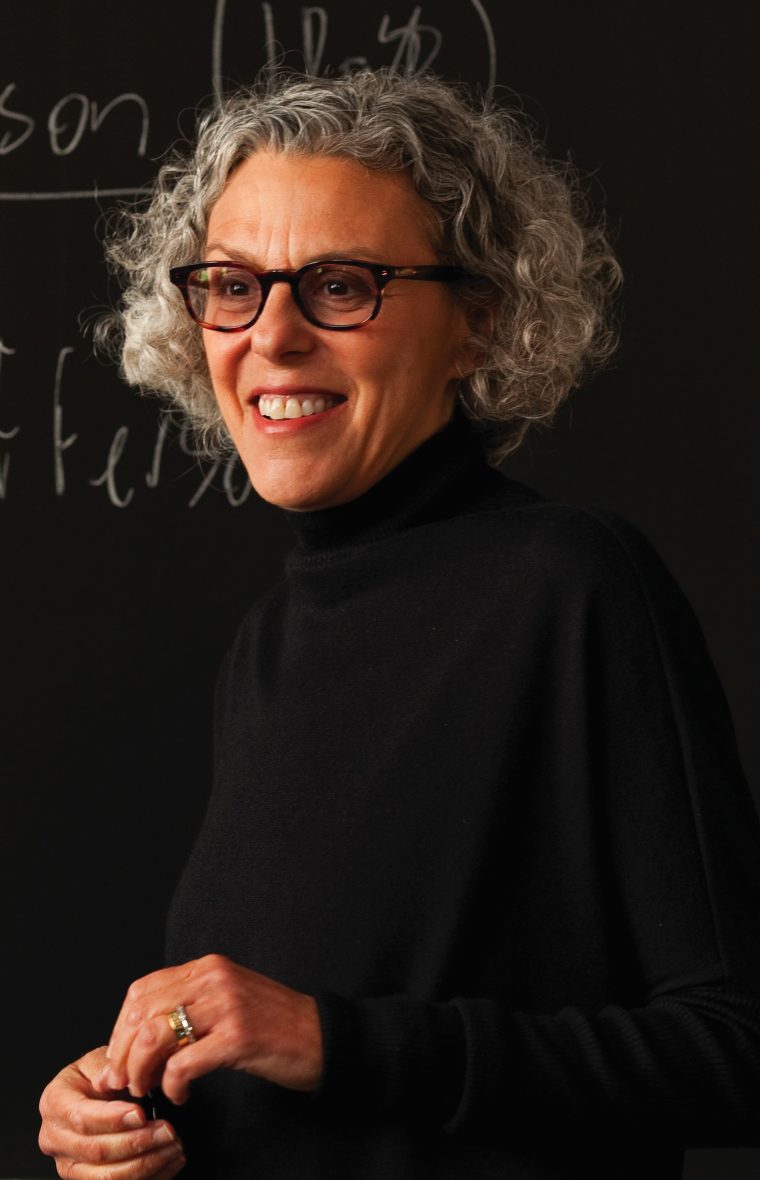 SL: Did you ever get to meet Justice Ginsburg or get to interact with her at all?

LE: I have met her a couple of times, but I can’t say we sat down and had a conversation.

SL: Gotcha. Are there any anecdotes that stand out to you not necessarily from your interactions with her but just from her career. Any moments or specific quotes, something like that, that crystallized who she was?

LE: She was an unfailingly polite person. The thing that really comes to mind with me for Justice Ginsburg was how, even at the end, her questions at oral argument were so fantastic. She very often asked the first question. I guess that changed when they went to the telephone thing, where they went in order. But when they were sitting in the courtroom, she would very often ask the first question. It was always a very good question and she could always do a follow-up. She was a very, very smart person. Very clever.

SL: For activists on the left, especially as there’s been this movement to treat Justice Ginsburg as more of a cult-like figure, there’s been this critique that she posited more of a sort of white feminism rather than fully leaning into the fight for racial justice. What do you make of that critique? Is it something that sounds fair to you? Or does it not really acknowledge the realities of her position on a conservative court?

LE: Maybe? I mean, I don’t have any real comment on that. I think that she had a goal in mind of gender equality for decades and it was a real motivating force for her, but I don’t really have a comment on that critique.

SL: In the last couple minutes that we’re on the phone, I’m curious as to what you think of what the near-immediate battle for Justice Ginsburg’s seat says for the future of the institution. What does it tell us about the Supreme Court that so much power can lay with a single person?

LE: It’s pretty crazy, isn’t it? The fact of it is that if President Trump were to get a third appointment to this court, there are areas of the law that will change. No question. You think about this: They really haven’t decided a gun case since 2010, despite the fact that they get many petitions every year challenging restrictions on guns. They haven’t taken them. I could give you reasons, but I think today one reason is [Chief Justice] John Roberts. There is a lot of uncertainty on how he would vote in these gun cases and so they haven’t taken them. I would predict that within months of a [third Trump] appointment, they will start taking gun cases. They will flesh out that entire area of Second Amendment law. Affirmative action is another area where we might expect to see big change. Abortion, and on and on. Obviously, you know, I’m not a seer, I can’t see the future with complete clarity, but my prediction would be that there are several areas of the law that will move to the right with a [third] Trump appointee. What will happen? Your guess is probably as good as mine.

SL: Well, I doubt it would be as good as yours.

LE: Surely, Trump will announce a nomination. After that, I don’t know.

SL: I’m not sure whether you’re going to want to give your opinion on this, but do you think the Senate should vote before the election?

LE: I’ll give you the answer I always give on this kind of question: The Senate can do whatever it wants. There are no rules here. All it says is that the president makes appointments to the federal courts with the advice and consent of the Senate. When they didn’t hold hearings on Merrick Garland, I got a lot of questions like ‘Is that legal?’ ‘Is that constitutional?’ And basically, the answer is ‘Yeah, it’s in the hands of the Senate once the nomination is made.’ That’s why I say it’s a pretty unpredictable situation. But I can tell you this. When the Court is treated as a political body, it’s never good for the Court. It’s never good for the Court’s legitimacy. And right now the Court is being treated as a political football, and that can’t help the Court.

SL: That gets at another question that I wanted to ask. I found a quote from an article you and University of Chicago Professor Eric Posner wrote for the New York Times. You were wondering whether a Supreme Court that was so rigidly divided by ideology could sustain public confidence for much longer.

LE: You know what happened last term, Matthew: Roberts did a really good job of softening that partisan, ideological split. He voted with the Democrats on the abortion case. Many people were very surprised. They thought there were clearly five votes to uphold those restrictions on abortion. But Roberts went the other way. However it happened, look at the Trump tax cases. Two tax cases and, you know, it was 7-2 decisions. Only [Justice Clarence] Thomas and [Justice Samuel] Alito dissented, meaning that the other three Republicans joined the Democrats. There was a lot of work on the Court last year, in very high-profile cases, where that split that Eric and I were talking about just didn’t happen. I think that’s the kind of thing that helps the Court.

SL: Do you think that Trump appointing a third justice to the Court before the November election would undermine that work that Roberts and the others did in the last term? How much does this situation with Justice Ginsburg undermine public confidence in the Court?

LE: Here’s the thing. If Trump were successfully to appoint someone to the Court now and Trump was reelected and the Republicans held the Senate, I think that the Republican conservatives on the Court would feel empowered. Now, if there’s a different scenario, if Biden is selected and there’s a Democratic Senate, [the Court’s conservatives] might feel less empowered. They might feel worried about their institutional legitimacy. And we may see some of that, that we saw this term. I think a lot hinges on what happens in the next couple of months.

SL: Wow, the stakes of this election were already high, but now even more so. My final question was about all this conversation about the potential for Democrats to expand the Supreme Court. If they do that, how would that change Justice Ginsburg’s legacy?

LE: Oh, tell me. Do you think it would? I don’t know. I don’t know that it affects her personal legacy. So, go back to FDR and how he proposed expanding the size of the Court. The Court was invalidating his New Deal legislation and he wanted to dilute the conservative power. It strikes me that today’s proposals to expand the size of the Court are less about the Court. I mean, they are about the Court: Democrats don’t want the Republicans to have a big majority. But [the proposals] are really, in a sense, payback. Don’t they strike you as sort of payback for Merrick Garland and now possibly payback for Trump three?

LE: And we can’t be naive about it. They would love to have a Democratic majority on the Court.