Pete Souza’s voice trembled as he looked at one of the last pictures he ever took of Barack Obama. After logging more than 1.9 million photos as the official photographer of the White House, Souza’s snapshot of Obama peering through a helicopter window on his last day as president conjured up fresh emotions. 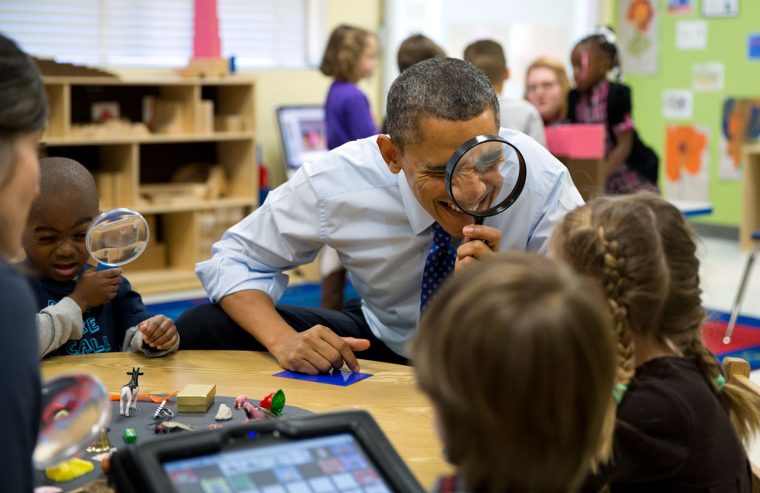 During his speech at Graham Chapel for the Trending Topics speaker series, Souza projected his favorite pictures onto the screen to lay out a visual timeline of the most important periods of the Obama presidency, from the “worst day”—the 24 hours following the Sandy Hook shooting—to the day Congress passed the Affordable Care Act. Souza has released two books of photos from his time in the Obama White House; his most recent, “Shade: A Tale of Two Presidents,” cheekily juxtaposes images of President Obama with President Trump.

Student Life had the chance to discuss Souza’s career with him after his talk.

Student Life: You covered the Reagan White House, and I was wondering, what did you learn that you put to use the second time around?

Pete Souza: I think the main thing I learned was the key to documenting the president for history is having trust and access. I think it was crucial to understand that and to have a man, Barack Obama, who I had already developed a…professional relationship [with], understand it enough to give me the access that I needed, because without that access I wouldn’t have made the pictures I made.

SL: And how’d you toe the line between photojournalism when you were at the White House and public relations? Did you see yourself more as just a photojournalist documenting the presidency or maybe more of Obama’s photographer or both?

PS: I looked at the primary function of the job, which was what I tried to uphold, was that I was there to document the presidency for history. And, you know, I came at it from the background of a photojournalist. I don’t know that if I had been assigned to cover Obama for Time Magazine for two weeks or three weeks that I would have made pictures any differently. Now, obviously, the uses of my photographs are different. I mean…you’re not working for a newspaper. You’re working for the National Archives, essentially, because all pictures end up in the National Archives. But in terms of what gets made public, I did have some—a lot of input actually into that. But ultimately that was something that the administration would decide what became public. So I didn’t ever feel that I was like a PR guy. Did my pictures get used in that way? Well, yeah, but…the main function of the job had very little to do with social media or the White House website.

SL: Aside from the White House pictures you took, what was your favorite photojournalism kind of story, or picture that you had?

PS: I went to Afghanistan for seven weeks right after 9/11. That’s sort of an experience that, in many ways, was one of the highlights of my career. I’ll never forget that experience. I think it’s ingrained in me forever, and it’s probably one of hardest things I ever did. And in some ways, I’m lucky that I’m still here. Yeah, so that experience certainly was, I think, one of the ones that just meant the most to me for a lot of different reasons.

SL: So you mentioned the part about authenticity, about the aesthetic nature of the photos you take. Do you think that’s something you maybe did differently than presidential photography in the past?

PS: I don’t think I’m the only person to ever have that kind of aesthetic or that kind of access. I mean, Yoichi Okamoto, who was [Lyndon B. Johnson’s] photographer, he was the person who I drew probably the most inspiration from. Well, I mean, LBJ was a completely different character. Crude in a lot of ways. Great subject because of that, you know, dealing with Vietnam, you know, big issues. And Okamoto had such incredible access and was such a great photographer that I was trying to match the bar he set in terms of access, so certainly I’m not the first or the only one to have attained the kind of access you should have to document the presidency for history.

SL: Let’s say a president, a Democrat, gets elected this next cycle in 2020 and they asked you to [be the White House photographer]. Would you consider doing it again?

PS: No. I’m too old and I had no life, no personal life, for eight years. And I can’t do that to my family.

SL: Is it the best job you think you’ve had?