February may be just beginning, but love is in the air. If you’re older than a freshman or just really into the online dating scene, then you might be familiar with Datamatch, a free matchmaking service for college students that started at Harvard University but has now spread to over 25 different institutions nationwide.

The Harvard Computer Society first launched the service in 1994 as somewhat of a Valentine’s Day love survey: Students answered 20 questions and were then matched by a “magic algorithm” with others whose responses most closely aligned with theirs. 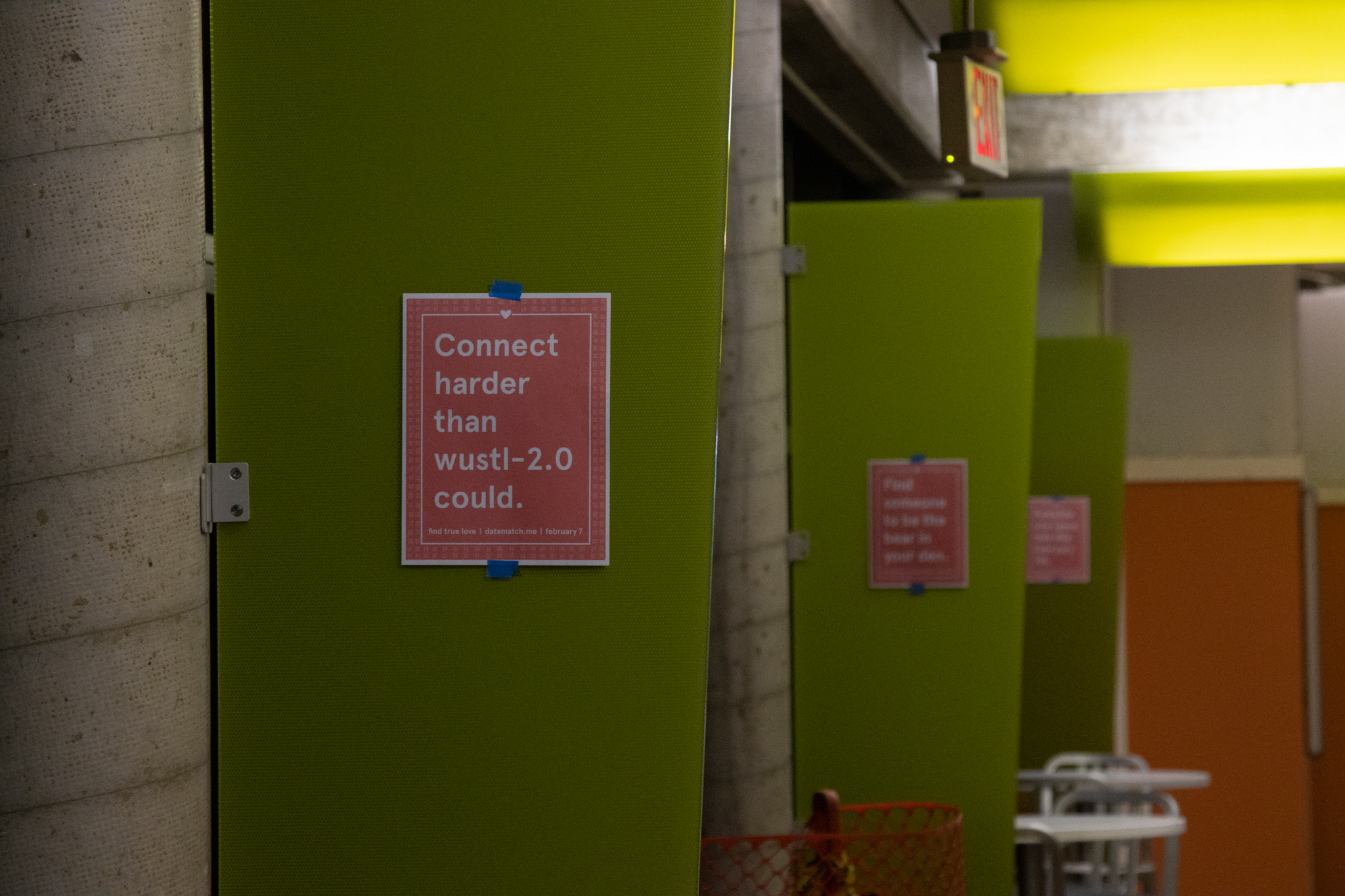 This year’s Datamatch survey will open Feb. 7 to any University student with a valid student ID.

Datamatch made its way to Washington University just this past year, thanks to junior Michael Dizon. Dizon found out about the service through social media and became inspired to reach out to the organizers at Harvard, who helped him get started to launch last February.

You might still be wondering what exactly this whole Datamatch thing is about, so here’s a rundown:

The survey form opens up on Feb. 7 this year. Anyone with a valid Wash. U. ID can log in and begin creating their profile as well as fill out the survey. Responses will be accepted through Feb. 13, after which the algorithm does its magic and plays computerized Cupid based on user responses.

The survey questions are no ordinary set, however. Questions are designed to be campus-related and decently goofy, yet insightful in ways one may not typically think. In reality a person’s choice between a Friday night date at Mission Taco or an intellectual conversation while sipping some Tuesday Tea could make all the difference in compatibility.

“Your top three matches are guaranteed to be mutual, and then once you click a button that says you’re interested in that person, you can [direct message] them through Datamatch and set up dates and stuff,” Dizon said. The direct message feature is new this year. Previously matches connected through email, but, as Dizon said, “People feel weird about sliding into someone’s Outlook email,” which is both valid and true.

Datamatch may seem like just another form of dating apps taking over our interpersonal relationships, but there’s a lot more to it.

“I think the thing with Tinder and Hinge and Grindr and stuff like that is that they’re just visually-based,” Dizon said. “You see someone’s face, then you read about them and choose to swipe left or swipe right, but Datamatch is all anonymous: You just type in your answers and you’ll get matched. It’s rolling the dice and seeing what you get. It’s a little less superficial because you’ll be matched with somebody you answered similarly to.”

Each participating college has their own survey and distinct pool of users, but they work together in providing feedback on questions and planning publicity campaigns. Meanwhile the whole process is still headed by Harvard, whose algorithm that outputs the matches remains a logistical mystery.

A year ago Dizon started Datamatch at Wash. U. on a whim with the help of only a few friends. Hanging up pink flyers about love across the South 40 without any certainty that anyone would participate definitely made it an unpredictable origin story.

“I realized doing it as one person stressed me out a lot,” he said. “But we have a great team of 13 people now and we have committees of people who are in charge of design, people who are in charge of fundraising and publicity…stuff like that,” Dizon said. Publicity has been relatively easy because they still have their outline from last year; delegating tasks is where much of the effort emerges.

But getting Wash. U. students on board was not hard, as interest levels were high.

“I really like personality quizzes and I have a lot of Valentine’s Day spirit, so when I first heard about Datamatch happening, I was very excited without even knowing what was going on,” junior Sonia Muzemil said.

Deja Henry, who is also a junior, echoed Muzemil’s sentiment.

“It was a really cool experience and when I found out that you can join the Datamatch team, I thought that was so cool—being on the other side and still participating,” Henry said.

Exposure to the matchmaking service is new for freshmen, but word has already spread quickly.

As a freshman herself, Brooke Simpson found out about Datamatch through the campus’ activities fair. Simpson saw the booth and said she thought, “That looks really cute! Like, love…I love love.”

While each story of involvement varied a little, all the team members seemed to share a common goal of spreading the spirit of love across Wash. U. The group is also in the midst of planning a Datamatch prom to finally award you that promposal you’ve dreamt of since middle school. Of course there exists some apprehension about how this year will pan out, but Dizon and the whole Datamatch team are excited for what’s to come. So save up those excess meal points and get ready to meet (over an Ibby’s dinner, of course) your match.