Inside Martinville: A look at the students behind the Fight for $15 Brookings occupation

Fight for $15 has brought together a unique coalition of members of the campus community under one banner—the fight for a living wage. Formal organizations like Washington University Graduate Workers’ Union (WUGWU) and Asian and Pacific Islanders Demanding Justice (APIDJ) have joined forces with community members to present a message that is loud, clear and right under the administration’s nose.

What started as an alliance between WUGWU and Service Employees International Union (SEIU) Local 1 has grown into a cross-campus movement headquartered at Brookings Quadrangle. While the Fight for $15 is nothing new on campus, it’s gaining more attention than ever before with the decision to occupy Brookings Quadrangle with a tent city dubbed “Martinville.” 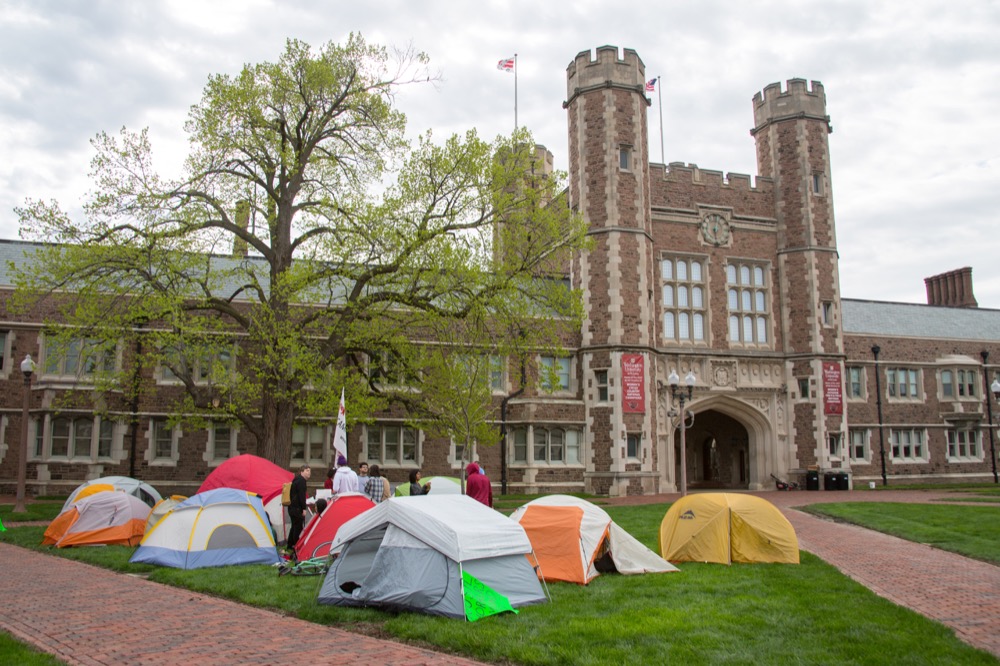 As part of the Fight for $15, WUGWU has staged protests, met with the University’s administration and held a sit-in in Chancellor-elect Andrew Martin’s office. Now, the group is elevating the discourse surrounding Fight for $15 by making the issue unavoidable on campus.

Second-year MFA student and WUGWU member Charles McCrory sums up the spirit of the occupation, saying “we can’t wait for $15/hour.”

“Deep down, what keeps me in this, is that the University—with its $8.5 billion endowment—can do this,” McCrory said.

McCrory works for the University as an MFA student through the Mentored Teaching Experience. Students working through the MTE—who design their own syllabi, teach and grade undergraduates—aren’t labeled as employees of the University.

“What we do isn’t recognized as actual work,” McCrory said.

For Ph.D. candidate and WUGWU member Oguz Alyanak, the Brookings occupation is a new way for WUGWU to continue their already two-year-long struggle for $15/hour.

“We’ve been doing this for two years—it’s not a new thing. The occupation, though, is obviously new. What inspired us was that we weren’t getting any response from the administration. They’re just postponing, like delaying the process. We need the $15 as a minimum wage at least—if not more—and free childcare, which is a huge issue for a lot of my friends who have kids…They have to take out loans to send their kids to childcare,” Alyanak said. “As a graduate worker, that’s something we could benefit greatly from. We are in solidarity, not just among the graduate workers, but undergraduates as well as housekeepers, janitorial staff and other workers on this campus. So this started as a graduate worker thing then spread to others. Our hope was that we would get our demands from the first day…and after the arrests, we decided to stick around until we get $15. We’re here every night, occupying more and more space.”

For third-year art history and archaeology graduate student and WUGWU member Lacy Murphy, the Fight for $15 is “a matter of life or death.”

“Fight for $15, for me, can potentially be a matter of life or death. In 2017, I was diagnosed with an autoimmune disorder that’s very rare, and there’s really not a lot of research about how to treat it or what my outlook is like in several decades. There’s really just not any information because of how rare the disease is, and this disease requires that I visit the doctor frequently, have frequent imaging, have frequent blood testing, and those tests are really important to make sure my health is maintained,” Murphy said. “Because Wash. U. does not provide an adequate healthcare plan, $15/hour or $31,000 annually for me would mean that I don’t have to second-guess myself every time I feel like I need to go to the doctor. I don’t have to worry about paying for prescription medication or having to choose between a medication and fixing my car. So, although for a lot of graduate students it might just mean starting a savings account, [for] a lot of graduate students like myself, it’s really a matter of having a healthy body or not.”

“This year it’s really hit home. I had elbow surgery and then some dental work. And elbow surgery was a minor surgery. We have insurance, but minor surgery was $3,500 after insurance. And then we got dental insurance, and I was really happy and I went in and first of all they were like ‘Wow, your dental insurance is really shitty,’ and I was like ‘Oh, that sucks,’ and I hadn’t had dental insurance for a couple of years so I had my teeth done, cavities filled, paid $700 and they paid for half of it. Two days after that, one of my molars broke in half. I’m going to go tomorrow and get a cap on it and it’s going to be $1,500 and none of that is covered. And so I’ve had $5,000 worth of medical bills…$5,000 means I’m not paying off my student loans this year. And that means another year or two of my master’s loans that is just going to add on to me until my 50s. What $15/hour or the $31,000 stipend means is I can save money not only for the future but also for emergencies that happen. It means not having to worry when something bad happens,” Manfredi said.

Graduate worker and WUGWU Events Coordinator Brandon Wilson is committed to the movement for fair pay.

“I’m a grad worker here on campus and experience the daily struggles between me and my colleagues of having to perform a lot of work—over 40 hours a week—for this university and then also having to balance a budget and not be able to afford certain basic needs. Some of my colleagues can’t afford childcare. Maternity leave can be a huge issue for our female colleagues. I’ve realized that the situation at the University is not workable and we need a solution, and this is the best solution we’ve got so far,” Wilson said.

Wilson also expressed frustration with how the University has responded to the coalition’s demands for $15/hour.

“As an organization, for the past couple of years, we’ve been trying to maintain a dialogue with the administration. We’ve been attempting to set up meetings, attempting to keep some form of communication open but have been shut down on several occasions, denied meetings and during meetings given answers that don’t address the core issue, which is our demand for a verbal commitment to $15/hour, and since we’ve been given the run-around for so long, we had no choice but to occupy the chancellor’s office and occupy Brookings for as long as it takes and practice civil disobedience for as long as it takes until we’re given a direct response,” Wilson said.

Graduate student in the Jewish, Islamic, and Middle Eastern Studies department Ian Mooney draws a connection between Fight for $15 and the East End construction project.

“I think it’s unfair and unjust that a university this wealthy, constructing this massive new set of buildings and lawns and things, refuses to pay its workers a fair wage. So, this is where I felt I needed to be,” Mooney said.

If you stop by Martinville, you’ll notice quickly that the tent city is not just occupied by graduate students. Many undergraduates populate Martinville, showing their solidarity with campus workers. One such student is sophomore Jessica Yu, who got involved with Fight for $15 through involvement with APIDJ.

“I’m with a group called APIDJ, which is a political group on campus for Asian Americans, and I’ve been in contact with some of the people working with the Wash. U. Graduate Workers Union, and they asked me to sit in on a meeting with Chancellor Martin. That’s sort of how I first got involved. In some ways, I was acting as a liaison between APIDJ and WUGWU, but then it’s also just a very personal thing for me to be involved. I feel like in some ways I’m involved as an individual but in other ways as a member of APIDJ being an ally,” Yu said.

Undergraduate senior Luca Rubinstein is focused on the economic justice that comes along with a living wage.

“Everyone here deserves enough money to be able to feed themselves, and at a university like this we have so much money, and a lot of it is going toward the administration’s salary, and if they were willing to make a commitment to pay people more, they could do it. But they’re not willing, and that’s why we’re here,” Rubinstein said.

Rubinstein also urges fellow undergraduates to make their way to Martinville to show support for the movement.

“We need a constant presence here, so anyone who is available, even spending half an hour here makes a difference,” Rubinstein said.

According to junior Maria Cortez Lopez, supporting Fight for $15 is simply “the right thing to do.” It’s a matter of privilege.

“It’s really a no-brainer for me to be here…a lot of workers who are part of this, aside from the grad students, are like housekeeping services, groundskeeping, food service, and when I walk around campus, these are the people who look most like me. And growing up, my parents worked the same “unskilled” jobs in order for my siblings and I to go to schools like Wash. U. So for me it’s just I’m in such a position of privilege to even be an undergrad student, and it’s really ridiculous if I don’t use that privilege to ensure that families like mine have enough money to not work multiple jobs or overtime. Considering that Wash. U. has such a large endowment and so many resources, it’s ridiculous to me that they don’t ensure that they use all that they have to make sure families don’t go without. If you’re an undergrad and you aren’t at least sharing things and talking about this, you need to really reevaluate where your priorities are,” Cortez Lopez said.