The 2020 elections are, admittedly, a long way away. But that hasn’t stopped politicians from declaring their candidacy for president. Here in Missouri, it hasn’t stopped the Better Together movement either. 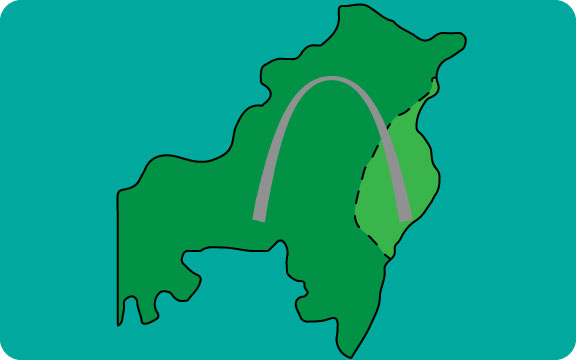 Simply put, the Better Together movement aims to merge St. Louis City and St. Louis County into one municipal district, with one police department, court system and mayor, via an amendment to the Missouri State Constitution. It is their hope that this merger can save the city money while maintaining a high quality of service and without the loss of jobs.

Ever since January, almost two years before the election, Better Together organizers have been promoting and informing citizens of their plan. This past Tuesday, Washington University freshmen Helen Webley-Brown and Aja Jones brought two Better Together community organizers to campus to educate students on what would, if passed, be a major change for the St. Louis region.

They were inspired to hold this information session and to reach out to Better Together because of classes—Jones and Webley-Brown are both enrolled this semester in Professor Gaby’s Social Movements class.

“In our Social Movements class, we have a semester-long project to, in a vague sense, get involved in a social movement,” Jones wrote in a statement to Student Life. “We researched movements that affected us living in St. Louis and came across Better Together. Because we all only had a basic sense of what this organization was about, we decided that this info session would benefit both us and anyone else who wanted to learn more about Better Together. We simply decided to hold this event to educate ourselves and others.”

Despite the class requirement, community involvement was something both students have been very interested in. Though neither is native to St. Louis, the importance of the city’s impact on Wash. U. and the impact of students on the city is something they have long been aware of.

“Even though I can’t vote, I was really inspired by the organizing around the midterms, especially with Prop B,” Webley-Brown, an international student from London, wrote in a statement to Student Life. “I think Wash. U. students can seem pretty apathetic or detached from St. Louis and wider politics; so, it has been really cool to connect with organizations and people who believe in students fulfilling their potential to improve their environment!”

“I’m really passionate about not seeing St. Louis as somewhere I will just leave in four years!” Webley-Brown continued. “I’ve always been interested in reading up on current affairs, and American politics is heavily publicized. A lot of my friends mocked me for choosing to come to St. Louis, Missouri, because of the negative press and stereotypes about it. I wanted to keep learning more about the historical and current political and socioeconomic conditions of the city and county. I think there’s so much potential for the area and students—no matter where they’re from—have a large role to play in unlocking it.”

“You are a part of [the region] whether you think you are or not,” Buckhouse said. “It’s not just about the University; the students have considerable economic power as well … Your voice and your presence and your impact on the city really does make a difference,” Buckhouse said.

Because of that, she emphasized the importance of not letting the “Wash. U. bubble” define your experience. Getting involved in the community in whatever aspect interests you is a great way to give back.

For Jones, getting involved didn’t start with Better Together.

“This is a place I’m calling home for the next four years; and within that time, if I can get involved and make change toward something I’m passionate about, I should,” she continued. “I wanted to feel more connected to St. Louis.”

Though the information session only attracted about a dozen students, Jones and Webley-Brown are undeterred. They have discussed tabling in the Danforth University Center, holding more information sessions as the election approaches, and hope to record a video for detailing the points of interest and questions students still have for Better Together.

“We have already talked about keeping this going and striving to educate the Wash. U. community if people on campus are interested,” Jones said. “Videos detailing why students think Better Together is interesting or appealing are much needed and really appreciated.”

Webley-Brown agreed. There are still 20 months until the election, she said, and that leaves a lot of time for more events.

“We’ll just have to see how we progress on-campus, because we are definitely interested in the movement and its growth.”