Decreasing disposables: the road to zero waste at WU

With the increased popularity of online “zero waste” blogs, through which bloggers and their followers share tips for reducing trash production, sustainability initiatives have in many ways become popular trends. 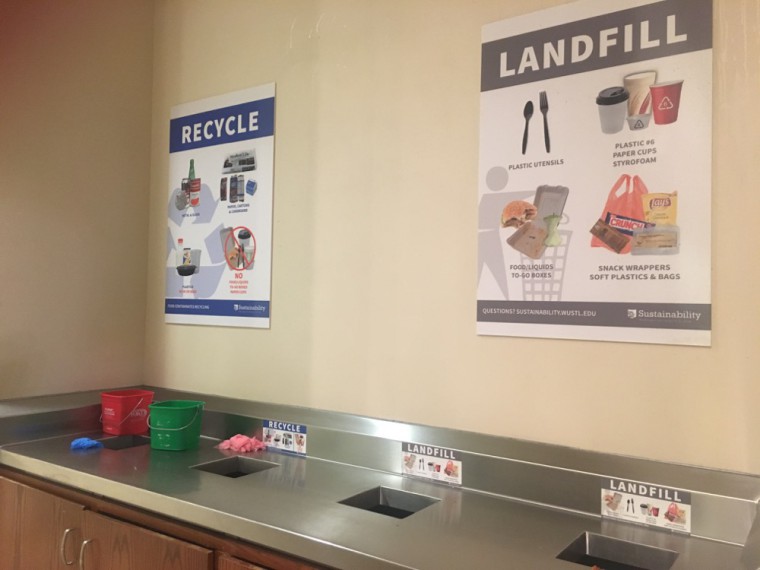 These “Recycle” and “Landfill” posters focus on the proper way to dispose of food, utensils and containers. Many of them are hung near disposal bins across campus.

As new composting initiatives pop up on the Danforth Campus, it’s clear that Washington University is starting to join this eco-friendly movement. But the processes that the different forms of waste undergo once they leave the hands of students remain a mystery to many.

The Danforth and School of Medicine campuses sent 58 percent of total waste to landfills in the 2017 fiscal year. Much of that waste was made up of products that students use every day: disposable containers and utensils.

However, the University has made strides in recent years to increase the diversion of disposables, such as to-go boxes and plastic cups and utensils, meaning that the products are recovered or repurposed through processes such as recycling and composting.

The University created a Strategic Plan for Sustainable Operations in 2015, which set goals to improve sustainability initiatives and thus decrease waste production. The plan’s main objective is to increase rates of the amount of waste diverted on the Danforth Campus to 55 percent by 2020, from 41 percent in 2017 and 21 percent in 2010.

One of the ways the Office of Sustainability hopes to minimize the amount of trash produced on campus is by increasing students’ use of reusable containers, such as plates and washable glasses, rather than the more popular choice of disposable to-go containers.

Unfortunately, certain plans, such as eliminating disposable to-go boxes in Bear’s Den by 2016 and the Village by 2017, have not come to fruition.

“Part of the challenge is that both [Bear’s Den and the Village] were under-designed, so they can’t really support 100 percent of reusable options because the seating capacity isn’t enough to allow everyone to stay in that place,” Wash. U. sustainability manager Cassandra Hage said. “We’re working towards a renewed rollout of the Eco To-Go program, so we’re hoping that that will be the solution. First in Bear’s Den and then at the Village, but even at the Village they don’t have the capacity to convert more than I think a third of their to-go boxes over to the Eco To-Go because of the dishwashing and the seating constraints. So there’s real infrastructure challenges.”

Another factor leading to the lack of washable container usage is that to-go boxes are often the default container given when food is ordered at campus dining locations.

“At the beginning of the school year, the staff is trained to put things on a plate unless a to-go is asked for,” Paul Schimmele, manager of Dining Services, said. “After a while the students retrain the staff, because the predominant choice is to-go. That’s a problem. I’m not giving staff a pass on that. They should continue to use the plates as a detail, but I think that they’re so much inclined to please and provide what students are looking for they basically—the way I describe it—they get trained to put it in a to-go container.”

The plan also outlined the University’s intent to reduce total tonnage of waste generated per capita in 2010 by 35 percent by 2020. Though the University fell short of its goal to eliminate to-go boxes in certain areas, which may lead to its failure to meet the 2020 objective, initiatives to increase diversion of disposable items have continued to expand.

Compost bins are now available in Bear’s Den, the Law School, the Village, Hillman Hall, the Knight Center and, as of this past month, five dorms on the South 40. The University plans to also offer reusable options such as plates and composting bins in the new Parkside Cafe when it opens on the East End.

“We’ve seen some really positive trends with composting,” Hage said. “I’m putting together the 2018 data now, but it looks like we actually doubled the amount of compost that’s being diverted between [20]17 and [20]18, which is kind of hard to believe. It looks like a significant jump, and so some of the reasons why that happens is because there is better education back of house.”

Although significant strides have been made regarding compost expansion, many vital locations, such as the Danforth University Center and the majority of residence halls, continue to provide landfill and recycling bins only. However, the Office of Sustainability and students involved in composting initiatives hope that student interest in these programs will encourage the University to dedicate more funding to them, though concerns remain about the levels of contamination in composting and recycling bins.

“I think one of the main problems right now that’s limiting the University from really spreading [composting] is just that they’re worried about contamination costs being too high, which understandably is a big issue,” Alexis Tinoco, sophomore and co-director of the Washington University Green Ambassadors (WUGA) program, said. “I think that’s one of the major issues behind the lack of composting in the [Danforth University Center], which everyone likes to ask about. So, I think if we could show them that it’s something that people can do if we just educate them properly, then it’s something that could be pushed forward.”

When materials are placed in the incorrect bins, recycling and composting loads can become far too contaminated to be accepted by handling facilities and are thus either separated by the facilities or sent to be disposed of in landfills, imposing great costs on the University either way. Forty percent of Wash. U. recycling loads were rejected by handlers in 2016.

Hage noted the decrease in value of recycled materials, as handling facilities have few buyers to sell them to since China has ceased purchasing recyclable materials from the United States.

“Around the country the markets are shifting for recyclable products, so in order for that market to work you need to have buyers,” Hage said. “When things are combined it takes more money to put them back to their materials—to separate the materials out and repurpose them. And if there’s a lot of residual contamination or food and liquids in there, that decreases the value because there’s more work that [handling facilities] have to do. So, if our stuff is subpar, then no one’s going to buy it, and there’s a chance that it will go to the landfill.”

Materials continue to suffer from contamination due to students’ confusion over the proper ways to dispose of each type of item, which can vary across dining facilities.

“I think some people are just also genuinely confused,” Tinoco said. “Some people will think that some products are recyclable or compostable when they’re just not. The signs—they don’t always look at the signs, they kind of just go off what they assume.”

Tinoco noted the importance of increased waste sorting education for Wash. U. students, since composting options would reduce the food contamination of recycled materials if done correctly, and suggested that proper instruction take place during Bear Beginnings.

“I feel like if the University—if their reasoning behind not expanding compost is going to be that people don’t know how to sort their waste, then I think there should be more of an effort there to educate people,” Tinoco said. “The WUGAs do a lot, and all that is backed by the Office of Sustainability, but a lot of times it feels like it’s just the Office of Sustainability helping us out. It’s such a big university that there should definitely be other people involved in it too.”

“[WUGAs] table in [Bear’s Den] at the beginning of the semester, but then as the semester progresses and people get more stressed out, they forget,” Ji said. “We definitely see another dip in quality of waste sorting. Mostly it’s a convenience thing.”

The inconvenience that Ji mentioned is a large factor in the continued prevalence of contamination, as it can be difficult for students to navigate the different waste sorting systems. However, student sustainability activists emphasized the importance of student support for composting and recycling initiatives to show the University that this is an issue students care about.

“I think just if people continue being very supportive of it and just really actively [participate], that will help the programs grow,” senior and former Office of Sustainability intern Cara Cook said. “And if people do pay more attention when they’re throwing things out and get really into a habit of it.”

“Even the things that are less convenient aren’t such a burden really. So make the choice that’s the correct choice.”