Bears and beer: A history of WU’s connection to Anheuser-Busch

Not only, it seems, are there two buildings named for the same brewery (yes, a brewery), but they are located almost as far apart as possible on the Danforth Campus. These buildings mark the considerable contributions of the Busch family and the Anheuser-Busch company to Washington University. They’re also just the tip of the iceberg. 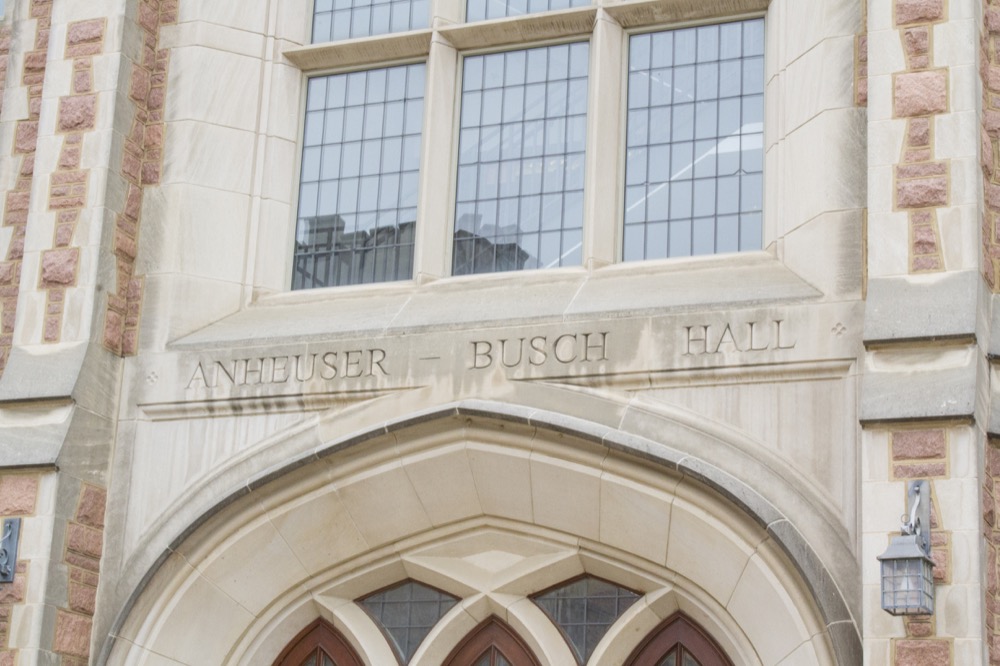 When Washington University moved to its present location in 1900, Adolphus Busch Hall was the first building to begin construction. After its temporary use by the neighboring St. Louis World’s Fair in 1904, Busch Hall became the home of the University’s chemistry department.

No further contributions were made until 1957. The Adolphus Busch III Laboratory of Biology, completed and dedicated in 1959 and an extension to Rebstock Hall, was paid for in large part by a donation from the Anheuser-Busch Charitable Trust. August “Gussie” Busch, Jr. was a main force behind this donation, which was made in honor of his brother and former CEO of Anheuser-Busch, Adolphus Busch III.

The newest University building to bear the Busch name is Anheuser-Busch Hall, dedicated in 1997. This building is not named for a member of the Busch family; rather, it commemorates the Anheuser-Busch Foundation, a charity organization started in the 1990s.

These donations are not isolated incidents of charity; they are merely the most noticeable form of the deep connection between Wash. U. and Anheuser-Busch.

Adolphus Busch joined Wash. U.’s Board of Directors in 1895, back when the school was still located on its old campus in downtown St. Louis. He would continue to serve on the Board until his death in 1913, at which point his son, August Busch, Sr. took over his seat.

Though Adolphus Busch III and Gussie Busch never sat on the board, the ties between their company and the school were still strong. August Busch III, CEO of Anheuser-Busch from 1975 to 2002, would become a trustee of the University, a position he still holds.

The Anheuser-Busch Foundation donation that gave its name to Anheuser-Busch Hall was made in honor of Fred L. Kuhlmann, an executive officer of both the company and the Cardinals under August Busch III. Kuhlmann, who held these positions for most of the 1980s and early 1990s, graduated from Wash. U.’s undergraduate and law programs.

Though the Busch family no longer owns Anheuser-Busch, the connection between the company and the University is ongoing. Jack H. Purnell, former CEO of Anheuser-Busch, where he worked for 36 years, is an executive in residence of the Olin Business School.

Next time you find yourself at the wrong Busch Hall, remember: It isn’t just the University trying to trick you. Wash. U. and Anheuser-Busch really are tied closer together than it seems.