The Banksys of the South 40: Chalk artists add positivity to campus

This past Tuesday, Student Life sat down conversation with David Massey, one of the artists behind the sidewalk chalk art that has been periodically appearing on the stairs of the South 40. Massey is currently a freshman in the College of Arts & Sciences and holds interests in geology, anthropology, linguistics, business and drawing. In our talk, we discussed what went into this project and how it came to be. 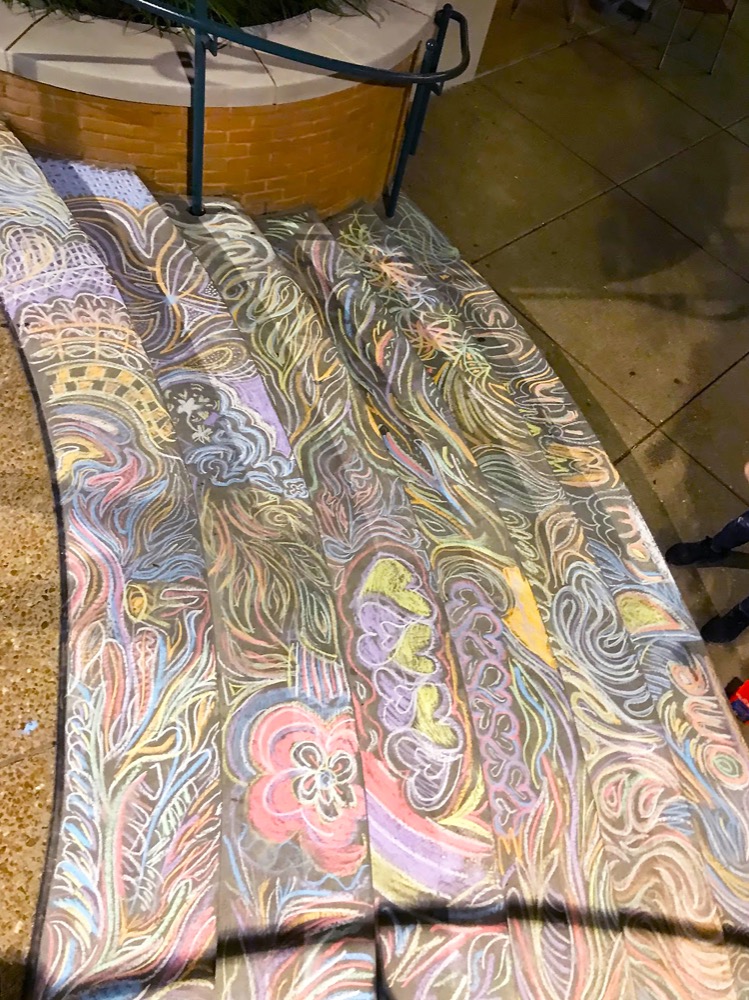 Chalk art on the steps outside of Bear’s Den on the South 40 by freshman such as David Massey. Massey and several classmates came up with the idea while learning about reflection in their Design and Creativity class.

Student Life: How did this idea even come up?

David Massey: We were in this class called Design and Creativity (which I highly recommend taking), and we were doing a section on the mind and doing reflection. The work that we had to do with this group was to come up with an idea for half an hour to an hour and do it [five] times in the same week, then talk about it. And we were trying to bring up this idea of drawing and using that medium, with the thought of “What’s something we can do that’s easy?” It was just after the freshman elections and me and Sophie Devincenti thought, “Well, why don’t we just do sidewalk chalk?” and then we all had this click of “Oh this is such a great idea, ‘cause we can just do whatever the hell we want and it’ll look just fine,” and it just started there.

When we started in the beginning, it was very much a “Let’s just do what we know,” because we were all not that good at drawing. So we literally just started drawing whatever the hell we normally did in our notes or whatever; some of us were better at doing some lines, some of us just filled stuff in. But what we did (‘cause we didn’t want to be lonely) was just play some music in the background, and we would ask people who walked by “Would you want to join us/help us?” and some of them would. Someone (I forgot who it was) wrote something instead of drawing something, and that’s where we started getting those ideas [for] writing inspirational quotes. Then we started taking ideas from each other and from other people that would just randomly stop by and we just started getting better because we started incorporating them.

SL: How many people were involved in this?

DM: There were four of us in this project group that worked together. On a normal day, we would see anywhere between 10 and 30 people who would stop within about an hour time frame to help us.

SL: Do you have a favorite memory?

DM: One of my friends was using her hands to kind of blend things ‘cause she wanted to look fancy, and then I just went at it. I started doing that with everything I drew; I would be like “How do I use this chalk up the quickest?” and then blend it with my hands. My hands would be covered in chalk, my body would be covered in chalk, but it was so much fun. And it looked like actual high-quality art. I was inadvertently teaching myself how to shade things. I’ve never done this before; I had no clue how to do any of this or how to actually apply this. But learning [to think,] “Oh it needs a bit more color here,” and then blending it like that is just so easy and it made these things that just looked so beautiful. It [blending] was probably my favorite, beyond being able to not stress and being in a group setting while listening to music. It was a way to not be isolated, but also have to do self-reflection.

SL: Have you gotten any feedback or criticism?

DM: We did, actually. It was surprising; we would hear things or sometimes someone’s phone conversation and they wouldn’t know that I, or any of the other people, were the ones doing it and I would just go, “Oh yeah, that’s me!”. But before that, they would always go “Oh I love seeing this every day,” “This makes me so happy,” “I love the people that want to do this,” etc. People like being able to look at it, there was a lot less of a “I want to do this” because of just who we are as people. But it was a very positive reaction, which made me ecstatic to hear because I wasn’t expecting that.

I didn’t blatantly hear any negative things, though sometimes I would hear people complain about having to step around it, which I didn’t really understand because it’s chalk on sidewalk: it’s okay to step on chalk. Like even the people [drawing] there would do it. It’s not offensive, since they’re stairs and you’re meant to walk on stairs.

DM: I learned a lot more from it than I expected. I thought I was just going to be [like] “Oh, it’s just another project.” But really, doing that little thing every day and taking that time to play and be kind of childlike, to have that experience and not some sort of structured thing makes everything else kind of less stressful and makes it more of a perspective to revolve around and lets you reflect in a way that I wasn’t expecting. Being able to relive a childlike experience and play around was just so beneficial, and if I could say anything to anyone, it would be to go around and play a little. Take some time and just play in between studying, by yourself or with a group of people, and just have fun.