The third night of the Olin Games: Kat(niss)y has fallen

And just like that, there were two. The seasoned veteran—despite her wealth of experience, the intensity of her preparation and her possession of the sheer insanity required to pull this stunt for a second time—has exited the competition. Katy Hutson is gone, undone by her own parachute—but that’s her story to tell. The two remaining will receive no parachutes, and should they last much longer, further complications may have to be introduced. 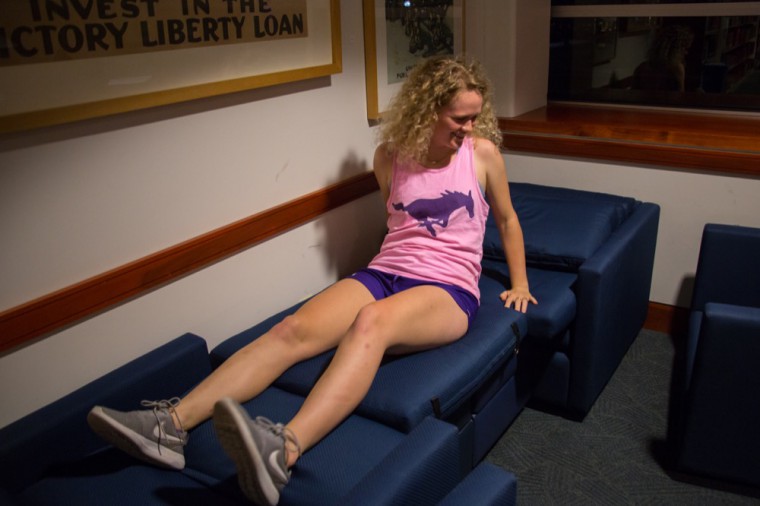 It’s 10:00 p.m. Tuesday night. I’m sitting on my beautiful, powder blue couch, freshly showered, eating an apple with some peanut butter and have a massive smile plastered on my face. President Snow is at my ear taunting me, but it only serves to make my smile grow.

I received my silver parachute last night after getting off of work. I was rewarded with a shower in my own home. The stipulations were that I had approximately the time it took President Snow to watch an episode of “Parks and Recreation,” and I couldn’t leave anything in my home or take anything from my home. Right when I opened the door, I knew it was over. I looked into my roommates surprised eyes and I grinned. I hadn’t seen Jesse in so long. I hadn’t seen my couch in so long. I hadn’t seen my kitchen in so long. I looked back at my chauffeur (President Snow), laughed and said, “Oh, I quit”.

Just walking into a real home, my real home, was too much for me. It threw the insanity of this game right into my face, and I succumbed to the logic. I’m not getting anything out of living in Olin. I’m actually doing worse in my classes because I’m living in Olin. I miss my friends. And. My. Couch. Why don’t I just stay…

So, I just didn’t leave! President Snow was rude and mocked me, but I honestly feel good about this. Sorry, to the people I let down, but also I’m not sorry at all. The parachute was too much of a good thing.

To the people who are curious: The hardest parts were being in public 100% of time, not having a light-switch and not being able to sleep. Also, carrying all of the stuff I needed for a week sucked.

In terms of regrets, I don’t have any. If anything, I regret staying as long as I did.

To my fellow tributes: Josh, you can quit now. Dorian, you amaze me.

After the games wrap up, around 12:30 a.m., I head back over to my friends in Whispers and give them a quick tour of my study room setup. While in the study room, we run into a man who may or may not have been me from the future, there’s really no way to know for sure. After a nice, cordial conversation with the man/myself, I headed back up to Whispers to distract my friends for some time, until I finally decided to head down for the night.

I woke up at 8 a.m., restless and with a sore back. Remember when I said that I was short enough to comfortably fit in those couches? I was wrong. I can manage taking a nap there, but after three nights sleeping there, I’m feeling the effects. My full bed seems like an infinite plane by comparison.

I ended up walking back to the Lofts shortly after to change for Yom Kippur services. While this may be considered by some to be an offence that could eliminate me, I had already cleared it with the game’s referees, mostly because I forgot that it was coming up as we planned the games. I managed to get changed and was able to spend a few minutes of downtime in my room, I dared not lay in my bed, as I was sure that if I did so I would never leave, before heading back to campus for Yom Kippur services.

Services came and went, and I am beginning to feel the effects of my fast. Things are really beginning to pile up. What we’re doing isn’t exactly that difficult, but more and more, I’m thinking of quitting. My visit home did not help my resolve, if anything, it eroded it further. I’ll probably quit tonight, but who knows? Maybe newspaper production will go so late tonight that I don’t feel like walking all the way back and instead just crash in Olin. 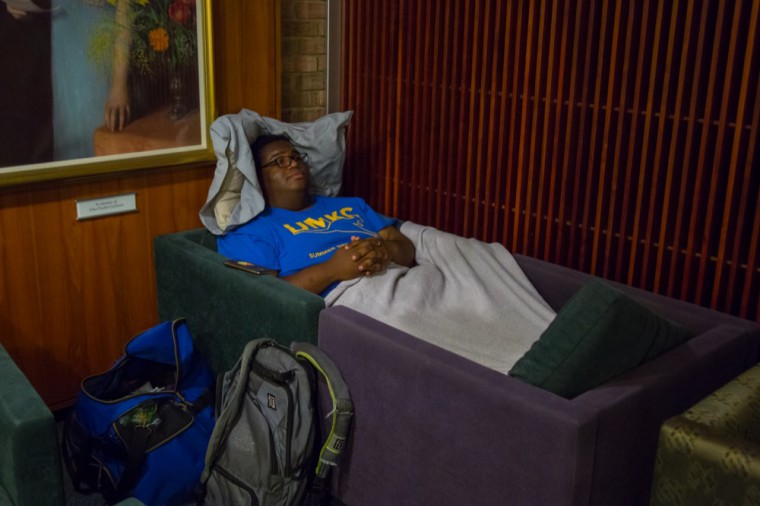 After CS40 assembly last night, I came back to Olin with high spirits. I played Catan with Josh and Sam and won my first game ever. I’m now 1-6 all time. I then went down to B-Stacks, brushed my teeth and went to sleep at a fairly reasonable hour.

This morning, I left the library 6 minutes before my first class started, and I made it comfortably. I stayed awake for most of it, a feat not usually achieved when I’m at home. I returned to Olin and took a fat nap on some really comfortable chairs.

I haven’t even reached my final form. Three days into this and I feel like I’m only getting stronger. I’m taking advantage of the benefits of sleeping in Olin now. The only thing that will stop me is running out of clothes, and I’m theoretically set till Sunday. Call me Haymitch Abernathy, because I’m going all the way.

As the day is winding down, I’m still confident. I have class at 8:30 tomorrow morning, and leaving from the library is going to be a much easier option for me. Wednesdays in general are usually rough; so, cutting down the time in transit between the South 40 and Danforth campus has been a godsend.