I met Zach Moskow, founder of the local event promotion business called Premier STL, in Bauer Hall on a Monday afternoon. He came from class, introduced himself, shook my hand and we talked for around half an hour. When I first asked to interview Zach, I didn’t really know what I was getting into. All I knew was that he was this sophomore, my classmate, who started an event promoting business. I’d gone to a few Premier events at various clubs, I’d seen the articles that had covered Premier in the past, but my main question was, “Who is Zach Moskow? What kind of student, person, human could manage to start a whole business halfway through their freshman year, and what would possess someone to do that?” Here is the many layered Zach Moskow and how he rose to be a party king.

Zach described his affinity for business as something that was “in the blood”. With a father having excellent business-sense and a mother with a quick wit, he gave a lot of credit and appreciation to his family, not only for their support, but for their influence. 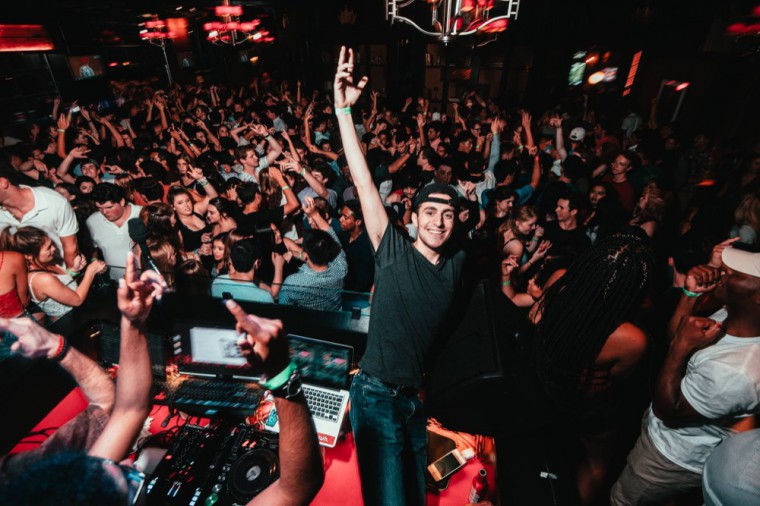 Zack Moskow smiles to the camera as he promotes night life to college students in the St. Louis area This past weekend was one of the many events happening in St. Louis this year.

Zach had a rather fantastic start in the world of earning money.

“Growing up I did a lot of magic with my family, mainly my dad. We’d do it for charity. Magic was how my dad paid for school, so he taught me that. I did maybe 10 parties a month.”

After his magical start, Zach didn’t stop with business, but he took a little detour into the world of engineering.

“Yeah, I thought I wanted to do engineering until I took the fifth year of physics at my high school, then I knew it wasn’t for me. Electromagnetism AP. No thanks.”

Through Zach’s sophomore to junior years of high school, he started and ran a business selling iPhone battery cases with a friend. It was his first business selling a physical product and it was difficult. This venture taught him aspects of customer service, and seemed to be a difficult undertaking. But nevertheless he worked hard, and was successful enough to use his earnings to start his next business in web design. Zach still runs this business, building websites every couple of months for profit. He described this as a small operation, more profitable, and more enjoyable than the charging business.

Zach Moskow, that kid at your high school everyone said would work for Google because working for Google was the coolest thing you could come up with at the time.

When talking to Zach about his entrepreneurship, I couldn’t help but wonder why he didn’t go through the University. My mind went to Beary Sweet Shop and UTrucking, but I came to learn that this was not the spirit of what Zach was searching for here at Washington University. “I wasn’t passionate about just taking over something,” Zach explained. His heart was in founding things, in visionary work.

Of course, Zach had a vision when he decided to start Premier.

“Since my brother had gone here for a while, and since I had been visiting for a while, I knew about the social scene at Wash. U. before coming here.” Zach prefaced. After looking at Pyramid Promotions critically, another event promoting business partnering with St. Louis nightlife for local students, he saw something he thought was good and cool, but felt a little exclusive to him personally.

“I didn’t like the concept of more than half the students tending to use fake IDs and stuff and it not really being an avenue for anybody, legally or generally, under 21 to go out. It was not an amazing opportunity for people who weren’t in Greek life.”

Zach soon found himself at Wash. U. unaffiliated from Greek life and unenthused with his nightlife options.

“I got the idea just from wanting to have an outlet that wasn’t a fraternity basement…I did it at first selfishly for me to have something cool to do.”

Zach ended up going to the trouble of creating a whole event promoting business that holds 18+ events at nightclubs in St. Louis, a task that requires extreme measures to find willing hosts because 18+ events require a large amount of security and leave clubs more open to liability. It was a success.

Zach Moskow, the legend that created a business instead of throwing a crappy dorm party like everyone else.

I had to think, though, that this must have been so difficult. How did he juggle this?

“For me, this is what I’m passionate about. I’m not on a sports team—I do play basketball, I play all the time and I’m on my fraternity’s [intramural] team—but at the time I made Premier I wasn’t in Greek life so that didn’t take up a lot of my time. I joined Greek life actually a month after. So that was…yeah, something,” Moskow chuckled. “That November I also ran for treasury for the school, and I won, so I was doing that at the same time, so I guess if you want to get something done, give it to a busy person.”

This only further confused my understanding, yet Zach eventually got to some of how he did it.

“I tried to balance it the best I could. I had a little bit of advice on how to manage the work because my older brother graduated in May last year, so he was here my whole freshman year. If I had school-related questions—like signing up for classes—he helped with that, so that took off a little bit of the load.”

So, he has a really great brother, but this still seemed impossible.

The more he talked, though, the more it became apparent that his friends and family, play a huge role in his happiness and success along with his passion. After every event, it’s a tradition for him and his team go to Steak n Shake at around 3 a.m., and get home at around 5 a.m. after a night of basking in the energy of the party, talking to the DJs he hired, hanging out with the photographers, writing checks when everybody else goes home, and all in all enjoying a night watching efforts come to fruition. His brother has come down from Chicago where he works to surprise Zach at his events many a time. There’s also the happiness Zach gets from giving back, with philanthropy events, like the one happening tonight, and he even finds joy in the service taxes Premier pays to Saint Louis to better the community.

To my protest, Zach downplayed his role on the Wash. U. campus.

“I’m not really the party king. People even wanted me to name this next event, ‘Zach’s Birthday’ because my birthday is this Friday, so after midnight it’ll be my birthday for two hours.”

We both acknowledged that far less people would probably show up for a stranger’s birthday party, though I still thought to myself…

Zach hopes to keep the business in student hands when he eventually leaves Wash. U. Until then, I’m excited to see where he takes it next.

Premier’s last event of the year is happening tonight at Siam STL benefiting Camp Kesem. A portion of the proceeds will go to support children of cancer patients. Tickets are 18+ or 21+. You may get tickets online or at the door.