The Danforth University Center is getting another makeover! The next Sam Fox senior to have her works on display in the DUC as a part of the Senior Class Council’s initiative to make student art more accessible is Maya Mashkovich, a Communication Design major with a love for human-centered design. Here, Student Life discusses with Mashkovich what inspires her, and she reflects on each piece in the exhibit.

Student Life: Tell us about yourself!
Maya Mashkovich: I’m originally from the suburbs of Chicago. I started doing graphic design in high school when my friend gave me a gig as theater T-shirt designer. I started tinkering around in Photoshop and thought, “this is kind of fun!” Now, I’m majoring in Communication Design and minoring in Spanish and focusing in on visual design as a whole but mainly UI/UX and human-centered design.

Senior Maya Mashkovich’s art will be on display in the DUC as part of a Senior Class Council initiative to show student art.

SL: For people who don’t know, what does UI/UX and human-centered design entail?
MM: UI/UX means user interface and user experience design, which includes product design and making apps and websites. The way I think of human-centered design is designing for the sake of social impact and putting the user at the center of the equation. Since the users are the experts, we should be designing around them and putting effort into researching to understand the problem at hand and how we can fit in as solution-makers.

SL: What got you interested in this kind of design?
MM: It all started with DFA, which is Design For America, the human-centered design club. I joined the club at a time when it was just getting started and was able to take on a role of helping it grow. That’s where I started to realize that design has a greater purpose than just slapping a logo on a business card and is much broader than graphics. I thought it was really interesting to think about how designers can play a larger role in society as a whole.

SL: What are you doing for your capstone project?
MM: I’m creating a kit that walks someone through Maslow’s hierarchy of needs and reading critique on how it relates to the 21st century. Maslow’s hierarchy is a motivational theory from the ’40s that includes a pyramid structure illustrating that in order to get to the highest level of pure happiness, you have to go through all of the lower rungs, starting with physiological needs, which range from getting sleep to drinking water, to safety needs, to, finally, love and self-esteem needs. What I hope to achieve through the project is expel the fear of self-reflection by giving a framework that, for better or for worse, is well-known, and having people relate that framework to themselves and their own lives. In creating a “kit” to talk about these ideas, I am also trying to put the UI/UX interests into print format. It’s a kit in that there are many interactive elements—you have to unfold pages and actually interact with the piece to go from book to book before moving on to the self-reflection part, which I have tried to streamline and make as intuitive as possible.

SL: Who are some of your design inspirations?
MM: The realm of social impact work is really interesting in that it’s still growing, so I mostly follow firms rather than direct designers. I follow IA Collaborative, IDEO, Frog Design, as well as a bunch of smaller agencies that aren’t worldwide that are doing really amazing work. For fine arts, I’m a sucker for Rothko paintings because they are very imposing and large. I really like this firm called DIA that is doing crazy [virtual reality] typographic work. On their Twitter, they have these amazing videos of type moving through space. I look at it and it just makes you think, “how is this possible, and how do people think of this in the first place?” The question can be difficult because there are so many different design initiatives that are always changing and interacting with one another. Also, if I were a book designer, I wouldn’t just draw inspiration from book design because there are people trying to work across different realms of design. People would say that a painting is just a painting, but ultimately, even painters are thinking about the way that their painting will be experienced, whether it is to push their own agenda or to match what they want the audience to feel.

Here, Mashkovich described each of the works she has in the exhibit:

Coalesce Festival
This is the branding and website design for a festival that I had to create for an assignment I had while I was abroad in Florence, Italy. The point was to pinpoint a need that wasn’t yet met, and I had always wanted to do branding for a festival. I started think about what a festival is supposed to be about, and I created these three pillars: music, skills and community. The community aspect is something people look for when they go to a collective event, and then I started thinking about how expensive festivals are getting and how to potentially create a festival that was more affordable. Ultimately, I created this system that would allow people to get in for a discount, or for free, based on how many hours they worked or volunteered. I then created a logo, wristbands and a website. The branding came from a need for a festival logo to be bright and exciting but also could incorporate these three pillars, which is where those squiggly lines and the circle come in. There was a lot of thinking about the business element and the concept before I got to the actual design execution. It was one of the first times that I had worked on screen, so it was fun to think about how to get the audience to interact through a streamlined experience rather than just handing them a booklet.

Luce Fiorentini
Our assignment was to create a map of some element in Florence that stood out to us, so I tracked what lights were on at what time of the day in the building across from us for a week. Then, I tried to figure out how to display that information while making it worthwhile or interesting for my audience. Because the streets in Florence are so congested and narrow buildings are on top of each other, I tended to think about who is behind the walls of these buildings. You are walking down the streets alone, but there are so many people around you at all times. As I wrote on the data visualization poster, “We are surrounded by invisible people as we walk down the street…do lights imply occupancy? And if so, who’s home?” By looking across the street at the building, full of people I don’t know or think about, I could tell based on the lights in the windows whether the occupants were home or not home, or theorize that one set of windows that always had the lights on was hallway, or that this is a workspace because of the times the lights went on. It was cool to try to figure out what parts of the building were used for what things and what the people inside the building were doing at what times based on those visual signifiers. It’s basically a glorified stalking project.

Poster of The Hebrides Overture
The prompt was to try to visualize sound and make a poster. Our professor had us listen to the “Hebrides Overture” by Mendelssohn and then draw our feelings out as we were listening to it. Then, we worked to create a poster for this fake event: a performance of the overture at a theater in Florence. Something that really interested me about the piece was its backstory—the overture is about Mendelssohn’s experience actually going to the Hebrides, which are these huge cave structures off of the coast of Scotland. Mendelssohn wrote it while he was visiting the site. It exuded this mystery but also drew you in and had a lot of ebbs and flows of energy. In designing the poster, I knew I wanted to experiment with Photoshop effects of motion blurs, and so, I tried to do that with the text in the background. I also have lines suggesting stalagmites and stalactites, as well as the staccato that comes out in the overture, to represent them visually. 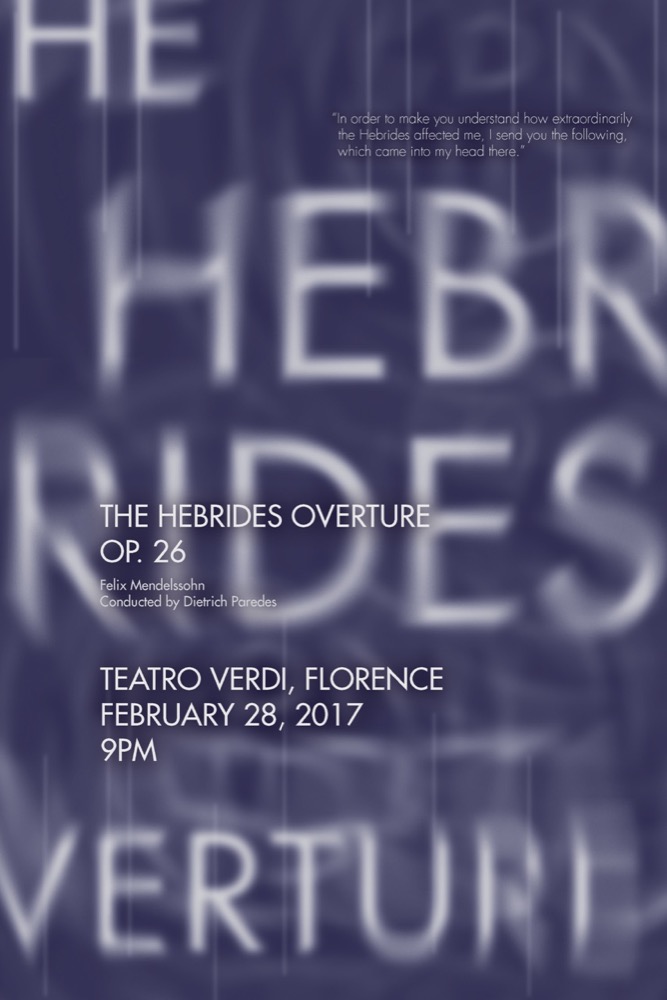 Radius
This was a sculpture I created for my 3-D class. I thought about how to go back to fundamentals and how I could pair these blocks of wood together using wooden hinges. I don’t usually work in 3-D, so figuring out how to do this in the first place was hard—but it was cool to play with primary colors in a 3-D walk-around situation. I added in the circles because they naturally hung around the rest of the structure—they are not glued or forcedly attached to any other part of the main body. Looking back at this makes me want to do 3-D work again because I like using machinery and working to physically construct something. I’m hoping that I can pair that with the 2-D design work that I do, thinking in terms of environmental design and how people can also interact with space, rather than with only printed or screen-based solutions. 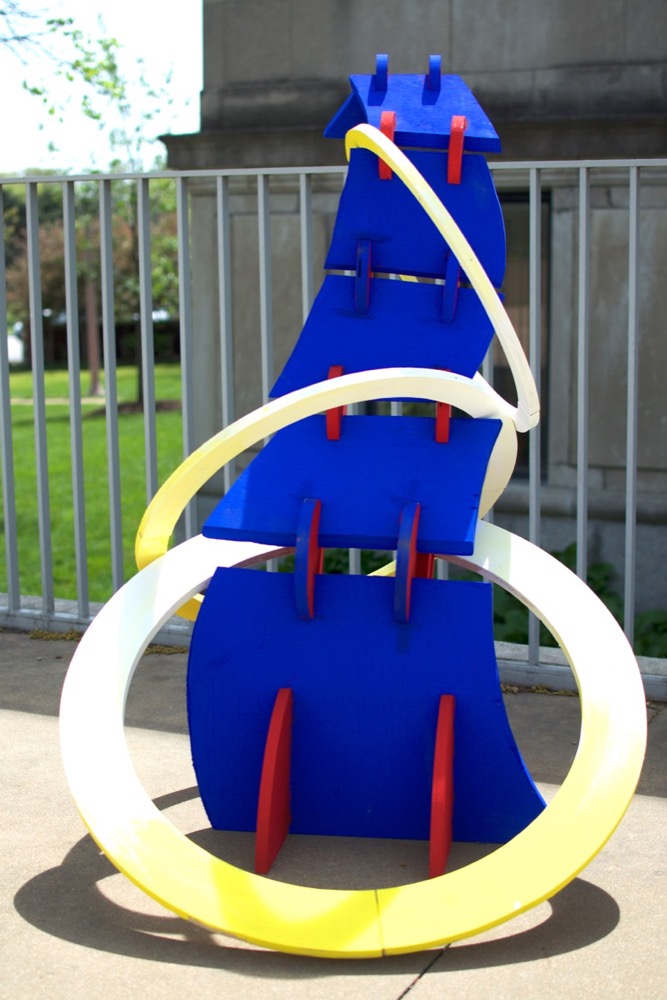 SL: What are your thoughts on having seniors’ works exhibited at the DUC?
MM: I think it’s nice because we are trying to figure out ways to connect with the rest of campus. Especially with all this construction going on, no one comes down [to Sam Fox] anyway and it’s nice that it’s helped us to be more well-known but it is also not a massive imposition. The art becomes a part of the school so that it feels like its naturally integrated, tying us in to the rest of the community.

SL: Thinking towards the future, do you plan to use this UI/UX after graduation?
MM: I’m trying to either explore the product design side or the social impact side. I’m applying for places that emphasize research first and think about how to start from scratch to really solve problems, instead of provide temporary solutions. So yeah, both are going to play a big role—I’m sure. And I am eventually going to go back to grad school for one of those specific branches of design. Until then, I’m excited for what’s to come.

Check out more of Maya Mashkovich’s work on her website, www.mayamashkovich.com.