Thirsty Thursday: All about Kombucha (part 2)

In last week’s Thirsty Thursday, we explored the characteristics, claims and realities of a drink called kombucha. Though it’s a tasty probiotic drink, kombucha can unfortunately cost quite a lot in grocery stores. However, making it at home costs next to nothing. I tried out some techniques, and here’s how you can, too!

To begin: You can’t make kombucha without a SCOBY, or “symbiotic culture of bacteria and yeast.” Search for images of SCOBYs, and you’ll see pictures of a booger-colored, jellyfish-looking disk. Surprisingly, SCOBYs are actually edible, and they’re the acting agents in kombucha. They give the drink its flavor, carbonation and probiotic qualities. 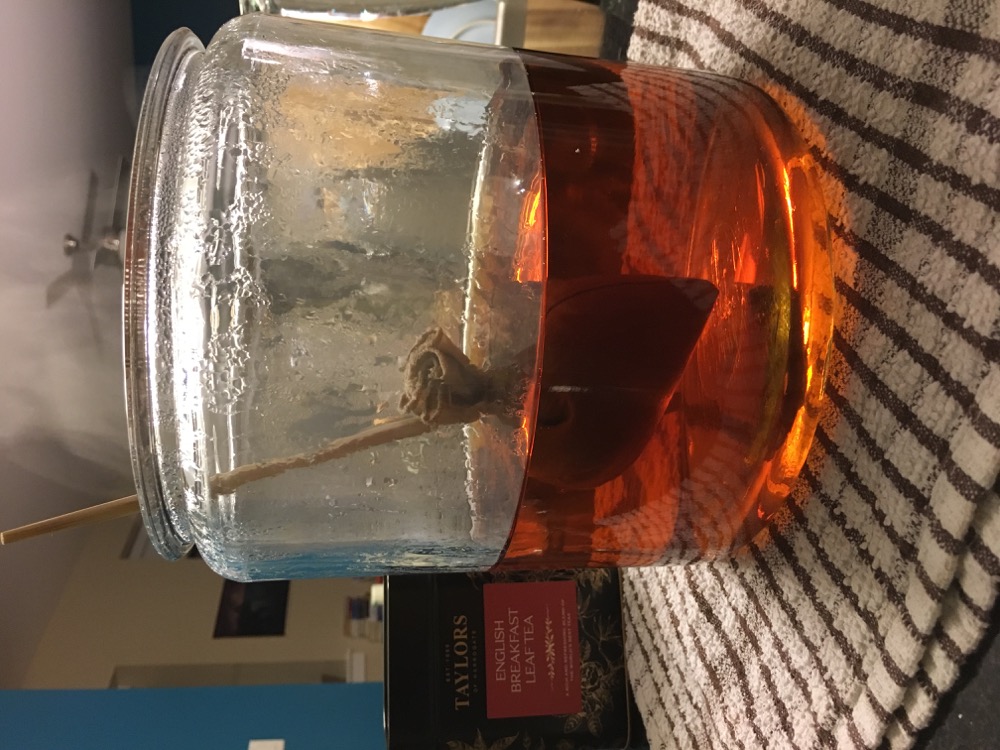 The kombucha tea mixture, which consists of a very large batch of sugar sweetened tea, sits in a large, gallon-sized jug.

You won’t be able to find a SCOBY in any grocery store, but there are a few options for acquiring one.

As it turns out, all bottles of kombucha most likely contain a “baby SCOBY,” or at least the good bacteria that will eventually form one. If you don’t want to go about purchasing a SCOBY, you can add store-bought kombucha to your sweet tea mixture (see the paragraph after the next). Let the brew sit a few weeks, instead of just one week, so that the bacteria can grow into a SCOBY and react to the sugar.

My partner and I decided to take a different approach. We started from scratch with a mother SCOBY (that’s the name of a full-grown, palm-sized culture). We called Local Harvest Grocery in Tower Grove South, which sells a few brands of kombucha, and the store told us it had a connection with another amateur kombucha brewer. It felt much like a drug deal as we waited a week for a SCOBY to arrive and then drove down to pick it up (for only $3) in an unmarked plastic bag. While it’s possible to buy SCOBYs online for around $10, it would be more difficult to tell if everything has been kept sanitary and safe to brew.

Once you have a SCOBY and a few clean jars to store the kombucha (we used a gallon jug for the first fermentation), you can start with making a large batch of black or green tea, sweetened with about a cup of sugar. This seems like a lot, but you only end up drinking a little bit of it. The SCOBY eats most of the sugar in the chemical processes. Wait for the tea to cool; then, set the SCOBY inside to sit for a week in a dark, warm place, covered with a breathable fabric. In this phase, the SCOBY needs to breathe.

The SCOBY, a gelatinous, bacteria-filled substance, sits in a jar. It is a necessary part of the kombucha-making process.

After a week, we took out our jar to test if it smelled slightly acidic (as if you mixed a little vinegar into the tea). Since it smelled ripe, we had finished with the first fermentation process. You can then pour the liquid into smaller jars, keeping the SCOBY in the first jar (to start brewing more!). Besides some spilling and a quickly purchased funnel, we had no problems so far.

Here’s where you can add flavors to the kombucha. We tested three bottles: one with ginger, another with ginger and mango slices and a third with pureed mango and ginger. Alternatively, you could just add sugar for a simple, sweet-tasting kombucha.

Now, you can place the bottles or jars (make sure they’re airtight so the kombucha gets carbonated) and let them sit again for a few more days. Check in every now and then, “burping” the bottles by opening them slightly and making sure they don’t become too fizzy. Be careful in this process. During one of our burps, I dropped the cap and got some shaken-champagne-sized volcanoes of kombucha spilling all over the kitchen. Like a dropped soda bottle, the kombucha at this point will contain a lot of pressure—so, open with care.

The acidic kombucha mixture ferments in a bottle. The fermentation process, from start to finish, takes about one week.

But once you have enough carbonation, your kombucha is all set! After opening the bottles, it’s best to keep them in the refrigerator to stop the carbonation process (you don’t want any more unexpected spurts). When cooling is complete, the kombucha stays fresh for a couple weeks. In that time, you can prep the next batch of kombucha! The best part about the process, we’ve found, is that after your first SCOBY and bottle purchases, there are few additional supplies needed, and the process is almost completely hands-off.

As for flavors, we found the ginger to make the cleanest tasting kombucha. But don’t take our word for it: Try it out for yourself!

If you have any horror, success or informative stories of making beverages in your dorm or home, let me know by email at [email protected] In a future installment of Thirsty Thursday, I’ll discuss what other drinks you should—or should not—try at home!