Thirsty Thursday: All about Kombucha (Part 1)

This is the first of a two-part series on kombucha. Next week, I will walk you through the surprisingly hands-off instructions on how to make kombucha at home.

In the past few years, a drink named kombucha has made its way through the health-food niche and onto the shelves of regular grocery stores. Its recent popularity oftentimes aligns with other super-food fads, such as kale, goji berries and chia, with accepted but mostly unknown health benefits. An average shopper could likely identify kombucha but won’t yet know exactly what it is or why someone would want to drink it. 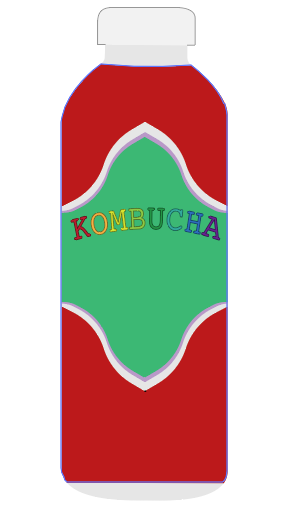 A first taste of kombucha poses a question to the taste buds, since the drink confusingly falls between usual beverage categories. An “original” flavor (most kombucha has fruit, vegetables, ginger or juice added for taste) has a slightly sour, vinegary bite coupled with a sweetness akin to homemade soda. Kombucha is carbonated and has a yeasty scent, like a light beer but without any alcoholic aftertaste. It’s a mix of many flavors, and I think of my first sip of coconut water as precedent: simply surprising, hard to place.

Many initial reactions to kombucha align with its actual composition. Kombucha is a fermented, carbonated, sweetened tea drink that dates back, many believe, to over 2000 years ago in Northern China. Kombucha starts out as black or green tea, to which producers add a SCOBY, which stands for “symbiotic culture of bacteria and yeast” and looks like a gelatinous, transparent disk. If you ever get a chance to see a SCOBY (some kombucha kept on store shelves too long will contain one at the top), you may shy away from the drink. SCOBYs look a lot like mold—certainly something you would want to avoid. But the SCOBY is technically only good bacteria. It’s actually what gives kombucha its acidic texture and probiotic characteristics, helping with digestion and stomach health much the way yogurt does. (In fact, it’s not dangerous to eat a SCOBY whole, though I can’t say I would ever have the guts to try one myself.)

Kombucha’s fermentation process is similar to that of other alcoholic drinks—bacteria and sugar combine to produce carbonation. Most kombucha also contains a small amount of alcohol (under .5 percent content, which is not enough for even a buzz).

Kombucha is often termed a “functional beverage,” meaning it falls into a category which includes energy and sports drinks, herbal teas and juices, all of which have a range of stipulated and actual health benefits. Some assert kombucha’s ability to cure diseases and reverse aging processes. Generally, such claims have not been backed by scientific evidence.

But kombucha has a specific and not unpleasant acquired taste, enjoyable for its own sake. It’s sweet but not as sweet as soda. As a result, it feels both like a treat and a healthy option. As for flavors, I prefer my kombucha with ginger, which gives it an additional spicy bite. Mango and citrus flavors also compliment kombucha well, making the drink akin to a lighter version of a shandy.

The only real problem with kombucha is the cost. Like cold brew coffee, the kombucha trend threatens to set you back at checkout, with a bottle usually coming in at around $4. However, making your own kombucha is surprisingly cheap. Once you buy a SCOBY (which only costs a few dollars), the cost of producing liters of kombucha barely exceeds the cost of making black tea. By my count, a bottle’s worth of homemade kombucha would amount to no more than a 50-cent investment.

In the second installment of this Thirsty Thursday special on kombucha, I’ll go through a first attempt at making kombucha, outlining how you can try it, too. The whole process only takes about an hour of preparation and a few weeks of storage. Look forward to that next week!