Scene change: How studying abroad at Oxford colored my perspective of Wash. U.

When people ask me how the University of Oxford differs from Washington University, one of the first experiences that comes to mind is mealtime.

At Wash. U., similar to most American universities, the structure of your meals varies on a day-to-day basis. You might eat dinner with friends at Bear’s Den, get something to-go on a busy day, or, on a “treat yo’ self” occasion, stop by Ibby’s. 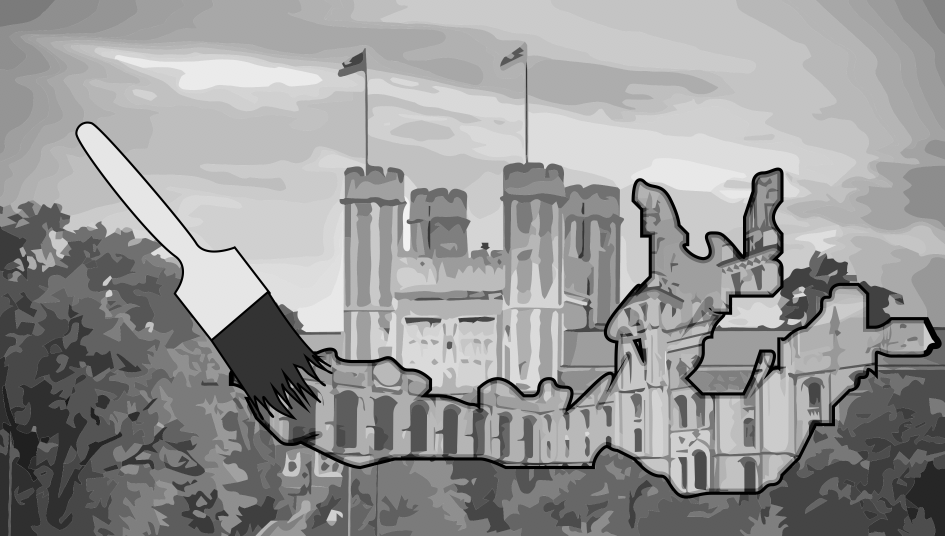 At Oxford, there are casual meals that resemble the Wash. U. dining experience; you grab the food you want and sit down with your fellow students to eat. But each college also hosts a number of formal dinners per term. At Keble College, the college that annually hosts a few Wash. U. history or English majors for a full year of study and integration, a formal dinner is a sit-down, served event that takes place around three times per week. It includes three courses and sometimes wine. Everyone attending must wear their black gown over their clothes.

Being in the hall itself can be an awe-inspiring, albeit intimidating, experience. The high ceiling, stained-glass windows and long, thin tables initially evoke a place of worship rather than a place to eat. Think “Harry Potter” and, in this case, you will actually get a pretty accurate image. The eyes of wardens past do indeed follow you from their places in the portraits on the wall. Rumor has it that Keble’s hall was on the short list of places the film series considered using, but Christ Church College won out in the end.

What Harry Potter does not show of the Oxford experience, however, is the emphasis on tradition. Oxford traditions pervade every part of student culture, from sporting events to exams to even, and especially, meals. When you walk into a formal hall, you will notice some students wearing longer robes than others; this signifies that the student did the best in their preliminary exams taken at the end of first year. The college fellows, tutors and guests of the warden, who comprise the high table (which is literally elevated above ground level) at the far end of the room, also wear different trappings representing their higher status in the college. Before the first course is served, the room stands and remains quiet while a Latin prayer is spoken or a hymn is sung by the choir. Likewise, as the high table exits at the meal’s end, students again are asked to stand.

Obvious from just seeing what takes place in a formal hall, stratification of people based on rank figures centrally into Oxford traditions. Coming from Wash. U., where there are no visual representations of rank, these idiosyncratic ways for distinguishing between people and deferring to others were strange and unsettling. Having partially chosen Wash. U. for the camaraderie I saw between students and the importance placed on community, Oxford’s emphasis on ranking, distinguishing, and categorizing was initially off-putting.

However, as I spent more time at the school and got to know members of the college and tutors a little better, I realized that these traditions, while seemingly all about separation, actually constitute community. They are what make up the Oxford culture, after all, and remind students that they are part of something larger than themselves—one of the world’s finest and most elite institutions, in fact. They remind students that besides studying in the same beautiful, old places that C.S. Lewis and Stephen Hawking once studied in, they are also engaging in the same practices, rituals, and customs.

Oxford students don’t blindly follow tradition, though. To the contrary, they are constantly interrogating the reasons behind the traditions’ persistence through time. Most of the Oxford students I met valued inclusiveness as much as Wash. U. students do. I observed the university’s efforts in outreach to students lacking the kind of tools and resources necessary to apply to, and eventually be accepted by, a school like Oxford. Even as they engage in the sorts of traditions that give the university its air of exclusivity, students are keen to change Oxford’s image as a place designated for only the most privileged.

At the same time, however, students see the importance these traditions hold in their relationship to the historical university at large. In 2015, for example, there was a vote as to whether students should continue to be required to wear sub fusc (a full uniform that includes gown) during exams. They elected to keep it.

Wash. U. does not possess the same kind of historical currency as Oxford. But seeing the very different values they use to organize their community made me consider the nature of community itself, and how one chooses to measure the strength of the bonds between people against inclusivity. Both are important, yet one can sometimes butt heads with the other. Oxford’s community is knit out of both the bonds and the separations between people that its traditions impose.

As Wash. U. addresses its level of inclusivity for various (particularly socioeconomic) groups, I think it would do well to consider fully these challenges that come with creating community. How an institution appears to its members does not always match up to the image it projects to the world outside of the bubble.