Portobello mushrooms and pole dancing: A look at a new health-focused spot on the Loop

As a new combined restaurant and fitness center, It’s A Wrap on the Delmar Loop aims to make local residents healthier, fitter and happier. I went there for the first time this past Sunday, excited to see what owner Chris Alexander was doing to make his vision for the community a reality.

Since we turned out to be the only people at the restaurant for lunch that day, the service could not have been more attentive. Alexander and the chef both came to our table to check up on us while we were deciding what to order. We were served water chilled by frozen fruit, which was fresh and tasty. The menu, comprised of burgers, small-vegetable-and-chicken plates and, of course, wraps, is simple. However, the vegetable wrap I ordered, which contained veggies, portobello mushrooms, spinach and peppers, was full of flavor, as was the buffalo chicken wrap my friend ordered. 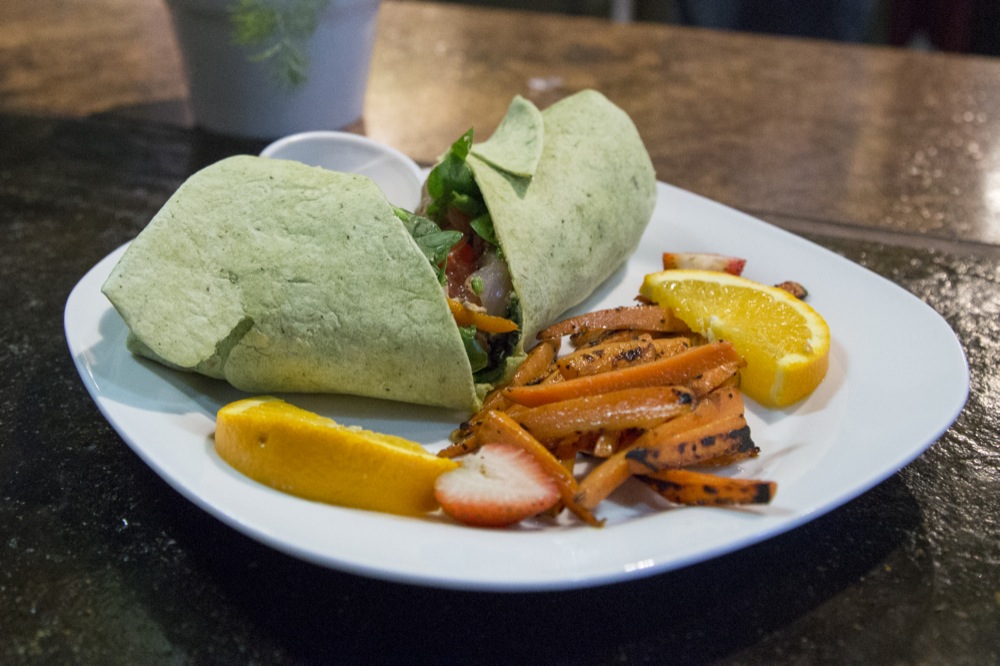 A jerk chicken wrap is served with fruit and vegetables at It’s A Wrap.

My one scruple was that the portions were not the heartiest. The wrap was probably about 3/4 the size of one you would typically get from Holmes Lounge for lunch, though I would argue that It’s A Wrap uses better quality ingredients in its dishes (and thus charges more). Another disadvantage of the new restaurant is that, compared to other places on the Loop, it’s a bit of a walk from campus and requires you to go a little past the Delmar MetroLink Station.

I decided the long walk was worth it, however, after Alexander took us on a mini-tour of the space. He told us about the fitness and workout side of his concept, mentioning that he hopes to start hosting zumba and spin classes in the restaurant part of the space in the mornings. He then took us into a large room that was completely empty, with the exception of two long poles standing from floor to ceiling.

Fitness equipment sits in the back of It’s A Wrap on Delmar Boulevard.

“Pole dancing is very popular with soccer moms,” Alexander explained of his vision for the space.

The concept behind the multifunctional space has been on Alexander’s mind for a while. Before he started in the restaurant business, he played in the international basketball circuit. In 2008, he signed with the Oklahoma City Thunder, but he soon moved to China to play for a team there. He went on to play for teams in four different continents until he retired in 2013.

As a result of his professional sports career, Alexander said, he has always been health conscious. When he started talking about how adding a slice of turmeric root or a bit of ginger to your smoothie or juice is a much better way of removing pain than popping an Advil, I could see how passionate he was about informing others of more natural healthy styles of living. 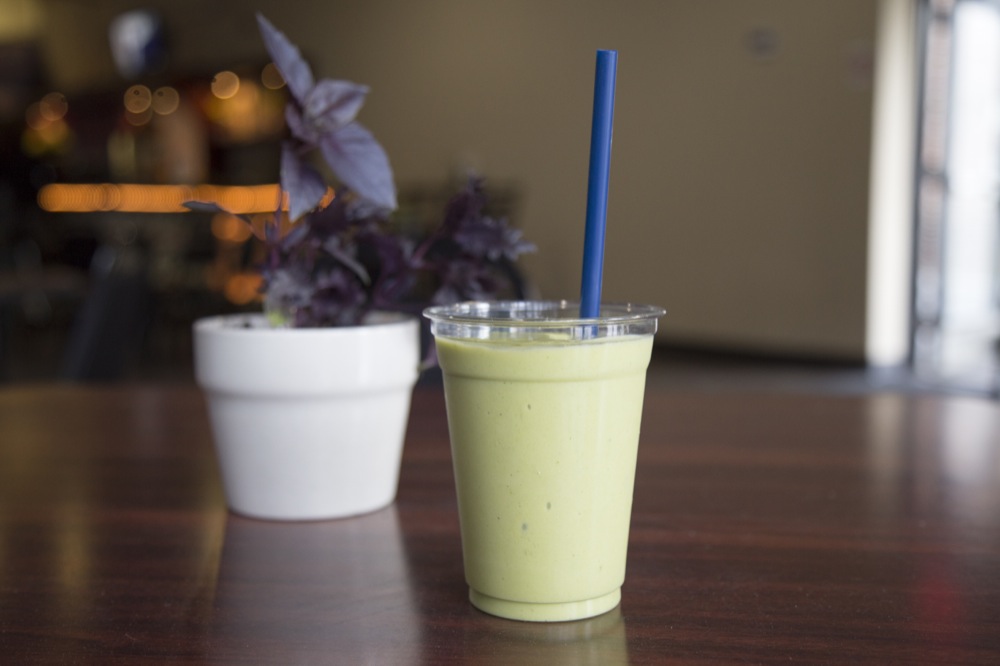 The green mango supreme smoothie sits on a table at It’s A Wrap.

Alexander told us that ones of his goals for the future is to start up a similar concept in North County, which is one of the unhealthiest areas in Missouri, with an obesity rate of over 30 percent.

“I want to expand this and start a ‘get-fit’ group for kids,” he said. “For kids and not adults because for some reason parents listen to their kids more than kids listen to their parents.”

For now, I would recommend anyone looking to incorporate more nutritious, tasty food into your diet (or to try some moves on the pole) to take a stop at It’s A Wrap. One way or the other, you won’t regret it.