Before we sat foot in the Little Black Dress exhibit at the Missouri History Museum, fashion was completely unfamiliar territory to us.

On our way to the exhibit, we wondered what we would make of the showcase. Would it be too artsy? Too exotic? Would we make it in time to see the exhibit and stick to our 11 a.m. brunch reservation at Bixby’s, the museum’s restaurant? Well, as we absorbed the details and stories behind each dress, it took us by surprise how much we enjoyed the exhibit.

The exhibit featured more than 60 epochal black dress trends—many with a local touch, designed by a St. Louis designer or a college fashion student. But there were also many familiar fashion names, be it Christian Dior or Yves Saint Laurent or Coco Chanel. The display of dresses cascaded into a volley of information and visual insight on the evolution of black from a mourning symbol to a fashion statement within the last century.

After exploring the exhibit, we headed to Bixby’s to try the restaurant’s famous brunch, basking in a rather “Devil Wears Prada”-esque sense of having gathered some basics on the history of black dresses. It was hard to think about black dresses when there was such a fancy platter of food waiting to be savored, but we tried our best to recount our takeaways from the exhibit. 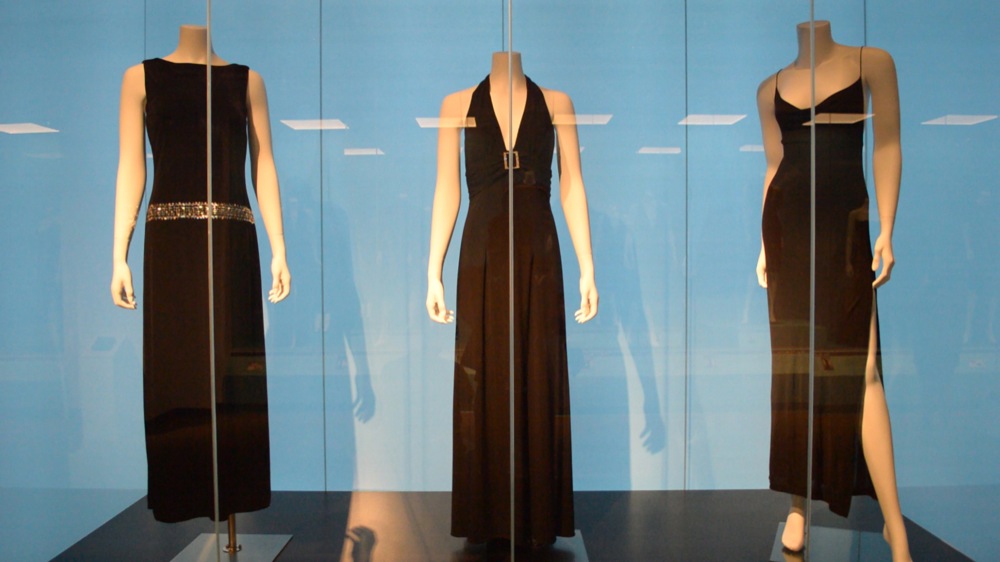 Anusree Natraj: Wow! This is so fancy. They have champagne and everything.

Alberto De La Rosa: I know—I really like the ambience. I think I’m going to get a coffee. I’m a coffee person.

AN: I’m going to get one, even though I’m not. So, Little Black Dress—it was so good!

AD: Yeah, it’s really interesting how this evolution of black has completely taken on a new meaning. The black dress still holds that meaning of mourning, but it’s also a fashion statement.

AN: Yeah, there have been many transformations, even in the way dresses have been designed. The 1920s, for instance, were all about loose-fitted, embellished dresses, which became a symbol of the jazz era. And then, the 1930s and 1940s featured more uniform-style dresses. But, by the 1950s, postwar dresses embraced the feminine figure. And then came cocktail dresses and evening dresses—I was pretty blown away by the amount of detail. Speaking of which, I’m just looking at this brunch menu and I can’t decide what to choose.

AD: Well, I guess, you could first start with the buffet and then get something a la carte. Or you could always ask our extremely informed server about what he would recommend.

AN: We’re just so spoiled for choice, be it brunch or black dresses.

AD: That’s very true. There’s so much variety in little black dresses these days because women are not restricted and wear whatever they want to wear. At the end of the day, practically every woman owns a black dress, and the exhibit wants to highlight how this seemingly mundane piece of clothing has held so much meaning across generations.

AN: Yeah, in the 1910s, it was a work dress. It was a full suit, and then over the years it became very stylish. Was it [Coco] Chanel who said, “Every girl should have a black dress and a black suit?”

AD: Let’s say it was her—[that] sounds like something she would say.

AN: I think her philosophy of “Simplicity is the keynote to elegance” was very true, but at the same time she said something like “A girl can never be over-elegant, she can only be overdressed.” It’s all about girls being both classy and fabulous, as she puts it. And, I mean, look at my farmer’s market salad from the buffet section, for instance. It looks so simple on the surface, but it’s so elaborately made with so many interesting and colorful vegetables.

AD: I agree. My biscuits and gravy look simple too, but I’m not sure about elegant. Anyhow, which was your favorite dress?

AN: It was a satin dress from the 1960s, I think. It was a long, elegant cocktail dress with spaghetti straps and light ruffles on the top. It contoured the waist really well and the flowing fabric elongated the structure really well. Also, I love how the black dress has gone from being just a black dress to a little black dress. Did you see the X-ray dress from 2014? I thought that was pretty cool.

AD: Yeah, that’s definitely how dresses are right now, and they have changed. I also really liked the Yves Saint Laurent dress because it was during the time when he started making his own clothing line, which was all about the common woman and not just the upper-class woman. While it appealed to the masses, it really symbolized that shift to producing high fashion for everyone. I commend him for that. And it’s a beautiful dress—the way he structured it is really well-done.

AN: Speaking of own clothing lines, another thing I found interesting is that many of these designers started out really, really young—like at 14 and 15—and I thought that was incredible. Remember the dress with red satin fringes that was a Wash. U. student’s fashion class project? That was so cool. To come up with those ideas during college takes a lot of brainpower and imagination.

AD: It’s really interesting because at the time the people making these dresses, [they] probably didn’t know they were shifting the context within society about ways women were perceived, which is why I think fashion is so important.

AN: That’s why I think it has become such a symbol to own a black dress. I mean—I’m even wearing a black dress right now.

Our waiter kindly interrupted our conversation to place our entrees on the table. We were still not done with our array of food from the buffet. That didn’t stop us from diving right into each of our dishes: Belgian waffles showered in a softly sweet maple syrup and the crepe of the day, which contained tender sauteed potatoes with a white cheese sauce on top.

AD: I feel that black is sometimes represented as such a negative color, but in modern fashion terms, that doesn’t make sense because it’s a part of everything. If you’re going to the park, you can wear a black dress, and it would be fine. But I feel like if you were to do that 30 or 40 years back, it would definitely have [had] a different meaning because, although dresses were the norm, the black dress certainly wasn’t.

AN: Well, I’m from India, and my mom always tells me not to wear black for any festive occasion because black is not seen as a color—it’s not colorful. “Colorful” signifies all the other colors, and that’s what you wear for any sort of celebration. Then, black is supposed to be a sad color, like a void.

AD: Yeah, that is really interesting. It reminds me of the black wedding dress we saw. I think it’s so daring to wear black on your own wedding day. I guess the perception that wearing black is [sad is] still a superstition in society. But why shouldn’t someone wear black or any other color, for that matter, on a wedding day? I mean, white is seen as this pure, innocent color, which is why women want to wear it on their wedding days. There’s clearly a delineation of gender there because men wear black suits on their wedding days, and it’s totally normal. But I think what the evolution of the little black dress is trying to show is that it’s no longer seen that way, for the most part. Except on wedding days.

AN: Yeah, the relationship of black and white in fashion has been like the [yin and yang] symbol.

Also, something I noticed was that every dress was designed with the intention of making women look a certain way. I think that’s something interesting because when you look at someone’s appearance, you look at them and not the dress but, as we saw in the exhibit, it’s the dress that adds so much value.

Then, we made another trip to the buffet section, this time for dessert. It seemed like our conversation about black versus white was ingrained in our heads as we unconsciously picked cookies in the form of a yin and yang symbol. As we made our way back to the table, Senior Video Editor Alberto De La Rosa fell victim to the omelet station and ordered a very large, perfectly cooked omelet. When we got back to our table, we ordered some more coffee, which our waiter was kind enough to give to us in to-go cups. He clearly noticed we were college students. Unfortunately, as life is never perfect, Alberto De La Rosa dropped his cup of coffee as he was walking out of the museum. It’s as if the universe agreed with him on something he undoubtedly believes in: American coffee is garbage, anyway.

Watch the video below for more about Alberto & Anusree’s experience: