10 reasons why you should check out Doughocracy

In the past few years, I’ve noticed a trend where restaurants are attempting to bring unconventional, delicious food to the fast food realm. In my hometown, a couple of young men opened a Chipotle-esque sushi restaurant that immediately became extremely popular.

Doughocracy, the new customizable pizza place on the Loop, is trying to do something similar. Since its grand opening last month, Doughocracy brings the power of pizza choice to St. Louis. Don’t get me wrong: Pizza has always been welcome in the fast-food realm. But now, it doesn’t have to be of questionable quality—in fact, fast-food pizza can actually be good. Doughocracy brings this new phenomenon to St. Louis—here are 10 reasons why you should check it out.

It’s extremely fast. The time between ordering and eating was about five minutes.

By the taste, you’d never know that it only took five minutes to make. It’s a mix between thin and thick crust with a light layer of sauce and the perfect amount of cheese (which is easy to overdo or underdo, so props to them).

The whole restaurant has a super cool vibe and perfect for any group size. About half of the seating is stools at a bar, and the other half includes tables of varying sizes. You can go alone, or you can go with 10 friends.

The workers are friendly! I don’t know how many times someone casually asked me how my meal was when they were passing by to go clean a table.

They have the Pepsi Spire, which is Pepsi’s version of a drink customizer. Any place that has one of those gets a 10-point boost from me. 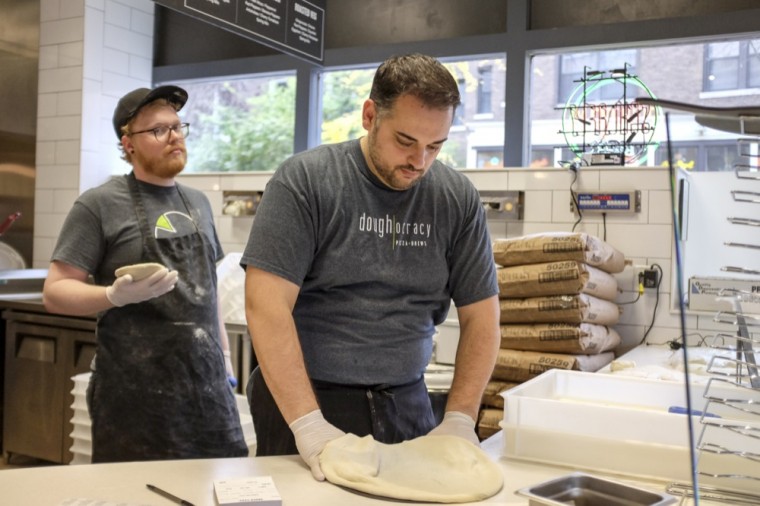 Workers shape pizza dough at Doughocracy. The Delmar location is the restuarant’s second in addition to a location in Geneva, Ill.

The desserts were OMG. While they don’t have a lot of options—Gooey Butter Cake and Nutella Bomb—that’s all you really need. The Nutella Bomb is a pizza crust folded like a calzone, stuffed with Nutella and marshmallows. Yes, it’s as good as it sounds.

The salads come on a pizza crust. It looked so cool that I actually regretted not getting a salad (and that doesn’t happen very often).

There are so many options. You have four sauce options, six cheeses, six meats and like a billion vegetables (actually 17, but it seemed like a billion).

Two of the three owners are women. Yay feminism!

It’s just good. I got the Vegetarian Monster and the Gorgonzilla, and for the amount of stuff on my pizza, nine dollars seemed like a good deal. If that’s not for you, a simple pie—just cheese, sauce, and crust—is only six dollars. If you like a good, quick meal, then it’s definitely worth a try.