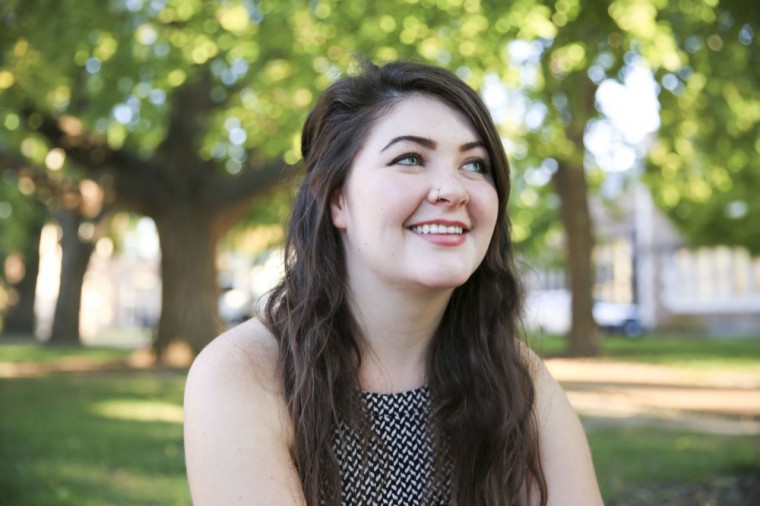 On being chosen for TRIO: “I remember when I first got selected, I was like, ‘What is this poor persons’ program?’ I definitely knew it was there to support me, but I was like, ‘Oh, this is interesting that I’m being singled out for being lower-income and first-generation.’ I think that was when I first realized, ‘Oh, nope I’m really at the bottom here.’

On being a first generation student at Wash. U.: “A lot of people I went to high school with were also first-generation college students so there was a much larger community.”

On support from TRIO: “When I was a freshman, and I was in the Focus Ireland program, they were like, ‘Oh, here’s this Ireland trip and it’s $3,000,’ and I was like, ‘Wow, I don’t have that money.’ So I went to TRIO and was like, ‘Hey what can I do?’ and they were able to point me to the right resources.”

On having parents that didn’t go to college: “The cliche is that because my parents didn’t go to college, they’re like, lazy or whatever. But I—pretty much every first generation student would tell you they think their parents are the most intelligent people in the world, and…I uphold that to the highest degree.”

On the college process: “The town where I grew up never really put an emphasis on college in general. It was more just like, you graduate, and you get a job doing like whatever, so I was enrolled into the Schuler Scholar Program at my high school, and they work with minorities and getting them to higher education.”

On support: “I had support through the [Schuler Scholar] program and just through the rest of the students who were in the program—they were also going through the same thing…Obviously my parents didn’t know that much about it, because, I mean, they’re immigrants, so they’ve never gone to college.”

On being first-generation at Wash. U.: “I like to surround myself with people who like, that’s not necessarily a topic that comes up a lot, because either we acknowledge it, but it’s not the central theme of our friendship, I guess…I think a lot of us tend to be minorities too, so we just kind of know each other.”

On the college process: “My mother, up to now, doesn’t know what the FAFSA is. I’m the one who filled it out…There was also this lack of knowledge as far as the culture of the campus and expectations once you got to college that we just all learned together, but I learned the hard way.”

On moving from St. Croix: “Elite schools don’t really recruit from the Caribbean at all, so there are certain schools who make it a point to come to St. Croix to my school to recruit, and they’re usually small liberal arts colleges…but nothing really top tier.”

On pressure from school and family: “I went through an incredibly hard time at the end of last semester…and I never even brought up the thought of not coming back to Wash. U., because I just knew it wasn’t an option. I think that that maybe isn’t exclusive to first generation college students, but definitely prevalent…Failure is not an option.”