Chris Naffziger stops as we cruise through an area of North St. Louis where, for entire blocks, the city almost disappears. In front of us, on Hebert Street in the JeffVanderLou neighborhood, the crumbling skeleton of a building barely survives, making for a sight you might usually associate with the aftermath of a natural disaster.

But instead of a tornado, brick thieves struck the historic four-family house, built in 1895, several years ago. As we turn and drive past the overgrown wreck, Naffziger, ever the optimist when it comes to the city’s architecture, points it out. 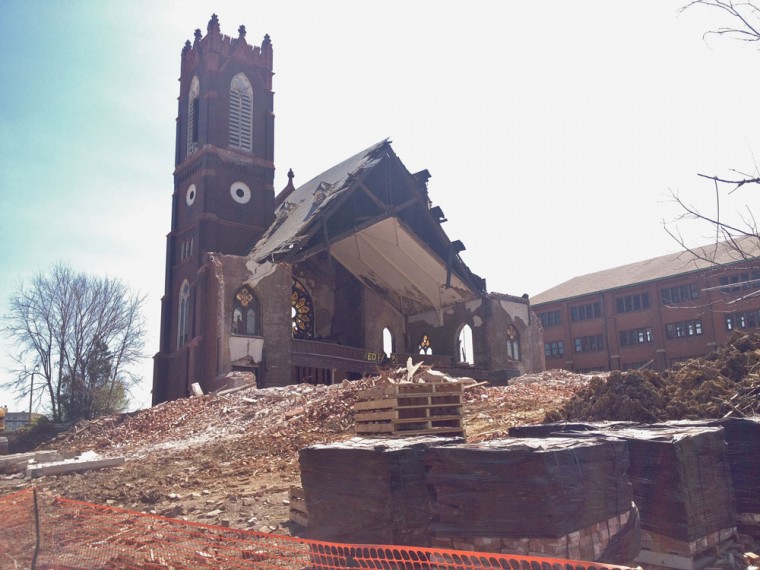 A Gothic Revival church in the Hyde Park neighborhood in North St. Louis stands derelict last April. The building’s remains were demolished in early August, with the church serving as one of a number of buildings in the area covered on the St. Louis Patina blog.

“It’s a testament to St. Louis builders,” he says. “I mean, my God, they took all of the exterior walls and it’s still standing? It’s pretty impressive.”

On his blog St. Louis Patina, Naffziger documents the beauty and history hidden throughout the city’s eclectic collection of neighborhoods, often in those troubled by poverty and crime or devastated by decades of abandonment. While he always focuses on the positive things happening in a neighborhood––he estimates he’s negative about once a month––his website’s frequent images of derelict buildings and vacant lots force us to confront the dire realities of economic depression and urban decay in large swaths of St. Louis.

Though Naffziger loves the city’s old architecture for its incredible craftsmanship and rich, idiosyncratic blend of styles, to him the buildings represent far more than their aesthetic and historical value. They represent racism, classism, failed urban policies––essentially, he argues, what happens when we abandon an entire half of our city.

The recent unrest in Ferguson has thrust such volatile issues into the national spotlight. Originally the destination of white families leaving the neighborhoods of North St. Louis en masse, North County suburbs like Ferguson have in recent decades attracted black families moving out of the declining city. Ferguson’s demographic change is striking: it has shifted from 73.8 percent white in 1990 to 67.4 percent black in 2010, slightly losing population in that period.

Though Naffziger’s posts mainly focus on St. Louis city, he sees clear parallels between Ferguson and his blog’s catalog of abandonment. While we initially met last spring, I reached out to hear his reaction to recent events, which he insists have made the lessons of North St. Louis’ decay all the more relevant.

“I think my website is very much about racism, redlining and how some of white America has continued to flee from its racial problems,” Naffziger said. “Perhaps my posts on North St. Louis are a warning to the people of North County of what is the eventual result of racism being ignored in the St. Louis region.”

Since starting the website in 2007, Naffziger has posted over 2,000 entries on architectural wonders and oddities in, around and beyond St. Louis. From his home in Tower Grove East, he sets off for sites all around the city, though he most often finds himself returning to the neighborhoods north of Delmar. The 36-year-old Naffziger grew up in suburban St. Louis and lived in Baltimore and Washington, D.C., before returning to the city several years ago.

Prior to his homecoming, Naffziger had become immersed in Washington University alumnus Rob Powers’ website Built St. Louis, which he credits as being “revelatory” and the main inspiration for his own blog. Struck by the stark images of ruined and vanishing neighborhoods in North St. Louis, he resolved to go see for himself the reality of this long-feared, ignored and misunderstood part of the city.

Naffziger quickly found himself “addicted” to exploring these beautiful but often troubled areas. He doesn’t sugarcoat the serious problems of the northern half of the city, but he also fights back against easy stereotypes and an often-overwhelming climate of negativity and ignorance.

“People are friendly up here,” he said, responding to those who ask him if local residents are ever angry or hostile toward his presence. “Growing up, you’d hear these stories, ‘So a friend of a friend, he accidentally got lost in North St. Louis and, like, these gangsters were shooting at them and screaming,’ and, you know, that doesn’t happen.”

Naffziger is aware of how it looks for him to walk around and photograph buildings in poor, predominantly black neighborhoods, but he says he’s never had a bad experience.

“I’ve only encountered curiosity,” he said. “People are honestly wondering what the hell I’m doing here. I’m just this guy driving around looking at stuff. I realize that people could feel threatened. Let’s be frank, North St. Louis African-American neighborhoods have always been the place where government planners have experimented. And when an elderly African-American woman sees me snapping pictures, I think it’s completely valid, I think it’s completely fair, for her to wonder what I’m doing. Am I some white guy plotting the next experiment on her neighborhood?”

The latest “experiment” on North St. Louis comes courtesy of Wash. U. alumnus and prominent property developer Paul McKee, whom Naffziger blames for the devastation of countless historic buildings in neighborhoods such as JeffVanderLou, St. Louis Place and beyond.

As part of his approved NorthSide Regeneration plan––a massive, $8 billion redevelopment of over 1,500 acres of land north of downtown––McKee has for the past decade bought up hundreds of buildings only to let them sit and rot as his project has suffered a series of stalls and setbacks. As we begin to drive into “McKee Land,” as Naffziger calls it, he points to a patch of prairie on an empty corner.

“Straight ahead was one of most beautiful buildings in the city of St. Louis,” he says. “Owned by Paul McKee, and he let it die. It was torn down five years ago.” In the center of the proposed development area sits the 33-acre Pruitt-Igoe site, now a potent symbol of the past failures of large-scale “urban renewal” efforts. Famously demolished in the 1970s, only 20 years after its construction, the former housing project has since given way to a dense urban forest.

Our destination one sunny April day is what Naffziger calls “the travesty,” and as we drive down Salisbury Street in the Hyde Park neighborhood, it suddenly, surreally appears. The spire and facade of a monumental Gothic Revival church stand ruined, a fraction of the roof surviving, the rest of the structure collapsed in a heap of brick, stone and lumber.

We park to walk around the rubble as Naffziger takes out his camera and shoots what little remains of the once-glorious edifice. The 119-year-old Bethlehem Lutheran Church partially collapsed barely a week before we visited it. Demolition crews tore down the last fragment of the church, its grand brick bell tower, in early August.

Though he’ll continue to champion the forgotten and forlorn parts of St. Louis, Naffziger’s optimism hasn’t been reflected in the ongoing saga of decay and demolition that remains the status quo in many parts of the city.

“I think one thing that’s important to realize,” he says, “is that North St. Louis still needs our help. It’s not static. It’s really sad. I’ve been coming up here for 10 years looking around, and it’s really, really sad to see how much more is gone.”

“It’s getting worse,” he says, “and Paul McKee is helping ruin it.”

Naffziger holds absentee property owners, brick thieves and misguided urban planners responsible for the continued destruction of the historic fabric of St. Louis, but he blames everyone in America, himself included, for largely failing our cities over the past several decades. St. Louis Patina is a warning, a call to arms, a shame-on-you directed at all of us. Its message is simple and important, and Naffziger sums it up best: “Let’s start ripping down prejudice,” he says, “instead of tearing down buildings.”