Joe Edwards and the Peacock Diner, a lifelong neon passion

At last, the Peacock Diner will be opening its doors on the Delmar Loop. The first day of business is tentatively set for Parents’ Weekend.

While the progress has been slowly visible through the restaurant’s large picture windows, few people know the story behind the new eatery’s name. It’s a tale that began 15 years ago, when owner Joe Edwards bought his first peacock collectible. 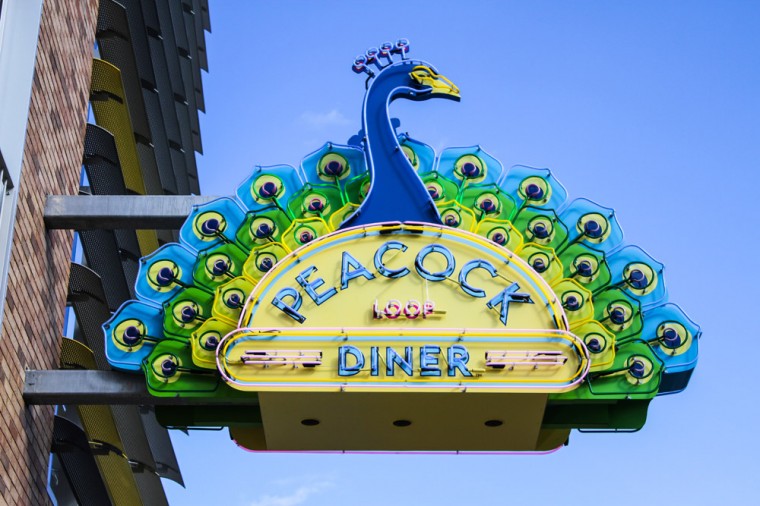 The sign for the Peacock Diner juts out above the sidewalk next to the Lofts of Washington University. The 24-hour diner is expected to open this weekend, just in time for parent visitors to campus.

Since then, he’s shopped at flea marts, at antique malls and in catalogues, and he has even contracted independent artists. Now his collection is so large that he can’t even remember which was his first purchase. All around the sides of the new restaurant are display cases chock-full of everything peacock: from feathers to shoes to illuminated figurines. Edwards has been awake well into the wee hours of the morning this week getting the arrangements just right.

You might be wondering what the deal is, though. Why the peacock?

The meaning actually ties into Edwards’ view for the long-range development of the Loop.

For those who don’t know, Edwards is the owner of Blueberry Hill and has been involved in the development of the Tivoli Theatre, Pin-up Bowl, the Pageant, the Moonrise Hotel and now the Peacock Diner. He is not just a business owner—he has taken an active role in city planning.

To him, the peacock symbolizes all that he is trying to create on the Loop—it’s beautiful, elegant and multi-cultural, he said.

Certainly, his favorite piece of his extensive collection is the diner’s sign. It’s hard to miss the active neon sign featuring a multi-colored peacock’s tail hanging above the Loop. Alongside his daughter, who is a graphic designer, Edwards commissioned the piece to be a fixture on this new section of the street.

“The signs are the artistic anchors to the Loop,” he said. “Can you imagine the Loop without the signs? It would be not nearly as cheerful or as inviting.”

Beyond an obvious, scrutinizing attention to detail, Edwards has a much larger vision that connects his various efforts.

“On the Loop, you have people from all economic strata interacting, and that’s the key to the future,” he said.

He prizes the diversity of those who visit the Loop, from Wash. U. students to local high-schoolers to families and residents of University City. Seeking to foster community interaction, he designed the counters of the diner to be U-shaped so as to encourage casual conversation with neighbors. 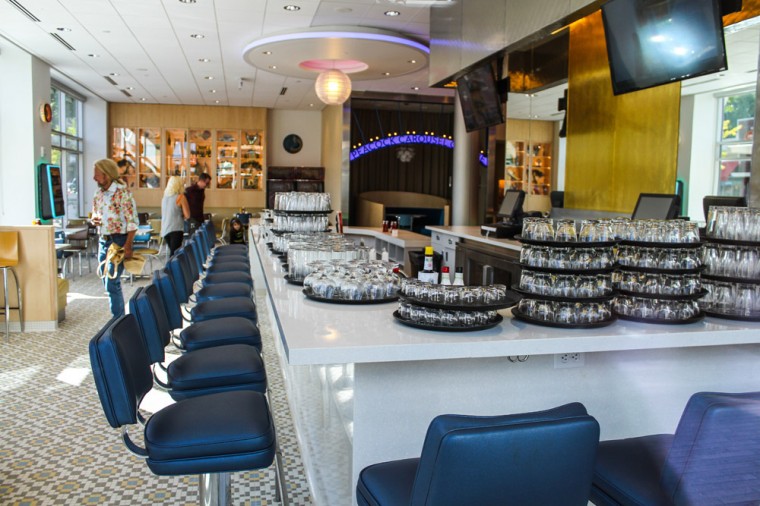 Joe Edwards, the owner of Blueberry Hill and other businesses on the Delmar Loop, walks through his new restaurant, the Peacock Diner, wearing a floral shirt.

With food being served 24 hours per day, Edwards envisions students studying for exams crossing paths with employees headed for an early morning shift.

Not only will the hours foster community, he said, they will add to the safety of the neighborhood.

“The Lofts and the Peacock coming in fills in a space that was a dark hole on the Loop,” he said. “I can’t emphasize enough how important that is to the safety, that there are no pockets anymore. Now, the Loop is a true 24/7 neighborhood.”

The fare won’t be limited to your average diner food. While there will be burgers and (some boozy) milkshakes, the menu will also feature Asian-influenced dishes, vegetarian and vegan options, and a selection of Missouri wines and local craft beers.

“It’s really important to me to have independent businesses that people can relate to,” Edwards said.

His hope, ultimately, is to create an inviting, new space.

As I was gathering up my notebook and pencil after talking to Edwards, I glanced around at the display cases and spotted a vintage frying pan filled with ceramic eggs. Edwards pointed it out to me as a piece he’d had for well over 20 years.

“It reminds me of the phrase, ‘Be like two fried eggs and keep your sunny side up,’” he said. “That’s what I hope the Peacock will do for people.”