From A to Zzzzzs: The finals guide to sleeping on campus

Reading week is drawing to a close, but that awful, sinking feeling in the pit of your stomach is welling up in full force. The weekday ragers or marathon video game sessions (hey, it takes all kinds) may have served as a momentary distraction for the onslaught of papers and final examinations to come, but with time ticking down until finals start, it has all become very real.

If you’re making the trek to main campus to study this weekend (and both of us know you should be), Scene has a proposition for you: save valuable time and energy by not walking back to your bed and instead experience the true magic of finals week by taking the first ever Danforth Campus napping challenge.

In order to help you motor through the madness, Scene took a trek around main campus to scope out the best napping spaces. And who knows, maybe you really will have time for those flashcards after a 15-minute breather. 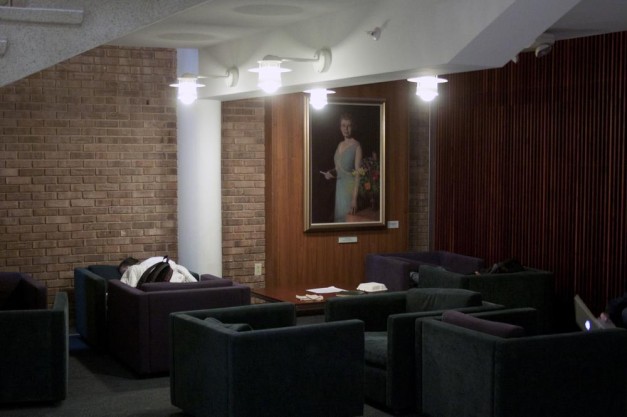 It is said that cliches exist for a reason. The B-stacks are that reason. With space for five in the classic two-chair arrangement, you can afford to bring a friend or two. If space is tight, we’ve even seen these nap spots shared before. Nothing says love like a double pair of flip-flops outside the sofa.

Comfort of sleeping surface: Unrivaled. These couches are worn in, and it is great.

Privacy: Eh. The walls of the chairs are high enough that it doesn’t really matter.

Noise level: Low, with the exception of the errant slept-through phone alarm.

Perks: Easy access to printing and those pretzel sticks from Whispers Cafe. You’re also likely to actually run into people you know in the library.

Quirks: I still haven’t figured out how to dim the lights.

With a fully functioning fireplace and a grand piano to boot, the Goldberg Formal Lounge lives up to its moniker. Help the space become more lounge and less formal by crashing on one of the four full-sized couches.

Comfort of sleeping surface: Moderate. The couches are clean and seem new, but as with most new Wash. U. furnishings, they have little to offer in the way of cushioning.

Privacy: Minimal. The DUC is a high-traffic building, and there are often events scheduled in the space.

Noise level: Low. Most of the folks we found in this room were studying, and we spotted one sleeper.

Perks: The lounge’s location on the second floor of the DUC means grabbing an after-nap snack is as easy as walking downstairs. We also hear it’s relatively close to the legendary third-floor ice cream vending machine.

Quirks: Don’t try to cater any nap parties hosted here with non-Bon Appetit food. Trust us on this one.

Offended whenever you hear the phrase ‘b-school, pre-school?’ After sleeping in the back room of the business school library, you can reclaim that phrase for naptime. Maybe after you pout a little, someone might even give you a juice box.

Comfort of sleeping surface: Awkwardly enough, we never tried to push through the wall of people obscuring the doorway. It looks comfy enough?

Privacy: Virtually none. This place is packed and may quite possibly be a fire hazard.

Noise level: Low, mainly restricted to low murmurs, shuffled papers and the sound of everyone around you making three to five times your salary right out of school.

Perks: It’s close to Einstein Bros. Bagels, and the four pushed-together chairs is a novelty. And let’s face it: the globe really ties the room together.

Quirks: There is some sort of modern art sculpture near the windows that may haunt us in our dreams. 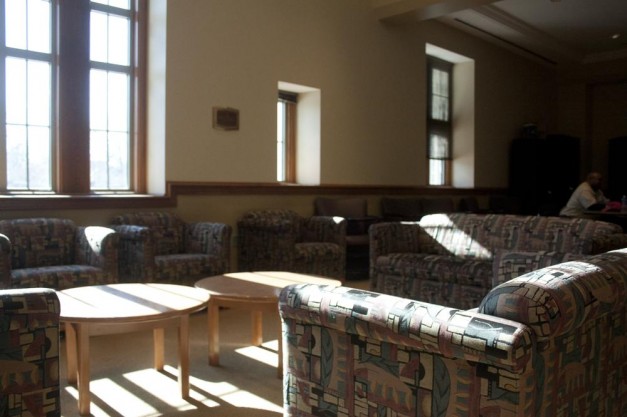 We’ve got chemistry with this space. No, really. There was a sign advertising walk-in hours for General Chemistry Laboratory on one of the side-room doors. Luckily, you can dream of a better grade in chem lab on any one of the plethora of couches up here —from two couches outside in the hallway area to one full, two mini and four single couches clustered within.

Comfort of sleeping surface: Variable. The outside couches are a tad undersized and don’t have much give to them. The other couches are more comfortable and spacious.

Privacy: Low. There are a lot of study groups that meet here, after all.

Noise level: Medium, unless you count the echoes of Saturday Organic Chemistry review sessions past.

Perks: Not only is it close to the vending machines, but you can also get easily accessible help with chemistry.

Quirks: Watch as the daylight pours in from the clumsily named Mitchell, Sherry, Josh, Justin and Ali Cohen Gothic Window. 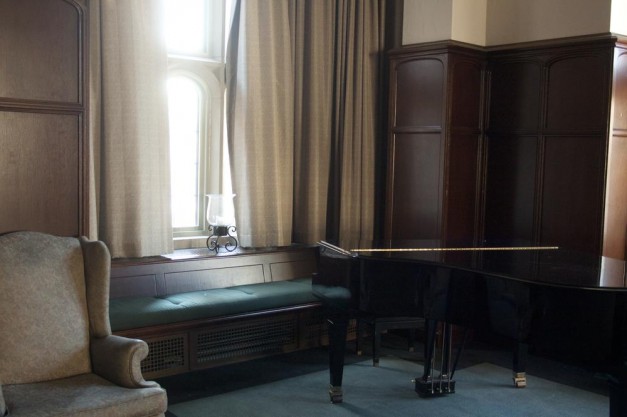 While the nameplate above the door may claim the room is “intended for academic and social gatherings,” the real purpose of the Brown Lounge is for some deep Zs. Quiet, spacious and with vaulted ceilings to boot, the room boasts six padded benches and two oversized armchairs so you can bring the whole study crew to this hidden gem.

Privacy: Variable. It’s out of the way, but it is unclear how much use the room gets.

Noise level: Low. Hardly any noise filters in from the hallway or the outdoors.

Quirks: If there was a prime candidate for most potentially haunted spot on campus, this would be it. The lounge looks like the foyer to the Haunted Mansion ride at Disney World. 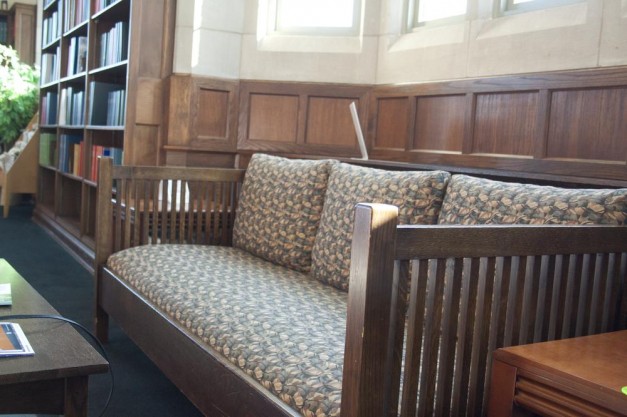 Within the Brown School library, two mini couches and a full-sized couch await the veteran public sleeper. Sun, stares and the dulcet sounds of construction serve as a foil to all but the boldest among us.

Privacy: Little to none. The couch is situated directly across from the main entrance and is in full view of all the tables.

Noise level: Strange construction-related noises punctuate the silence like the alarm clock you wish you never had.

Quirks: As we tried out the couch, we were given several instances of what can only be described as “the stank eye.” No love here.

ATRIUM BETWEEN JOLLEY AND BRYAN HALLS
JUST WHERE IT SOUNDS LIKE 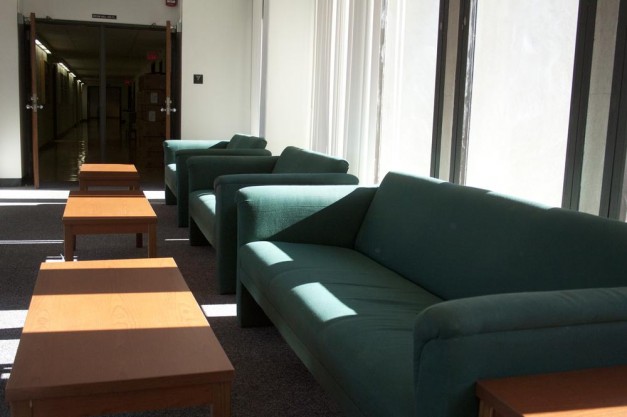 While obvious from the outside, it is a little trickier to figure out how, exactly, to access this space. However, it’s relatively secluded, and you can draw the blinds to keep out that pesky sunlight.

Comfort of sleeping surface: Acceptable, but noticeable wear and mysterious stains on the couches were a little off-putting.

Privacy: A few graduate students were quietly grading papers, but then again, our visit came at midday. Prospective nappers might have better luck after normal business hours.

Perks: There is a Coke machine as well as an ancient microwave. Plus, if you choose not to draw the blinds, you can people-watch as you gaze down upon the overpass.

Quirks: The couches look “well-loved.” You are advised to BYOBlanket. 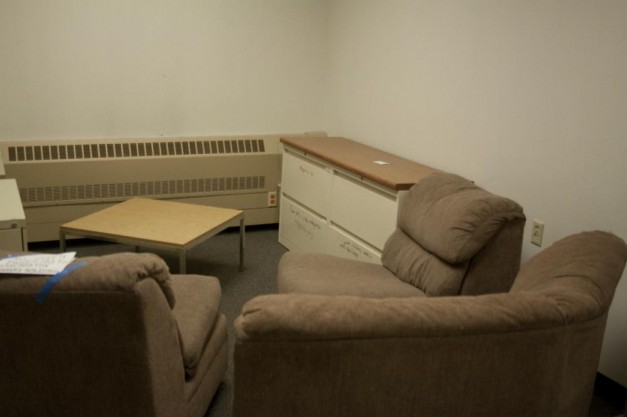 The most difficult to locate of all the napping locales, this room’s so underground it doesn’t even have a number. Room 507 is its closest counterpart, but that’s not likely to help. However, the cluster of three comfy couch segments makes up for the long and arduous trek.

Comfort of sleeping surface: As long as you don’t mind sleeping in a little bit of an “L” shape, this couch is as comfy as the one in your basement back home. Minus the cat hair.

Noise level: Zero. There wasn’t a soul in sight, and it looks like there might be some significant remodeling happening here. Eventually.

Perks: A set of bathrooms lies directly across from you, and there is unlikely to be a line.

Quirks: One of the couch segments sported a sign indicating it might be soon moved to storage, so get in on this while the gettin’s good.

Chances are you or someone you know is involved with one of the plethora of campus publications. If not, you can always sneak into the Harvey Media Center Suite anyway. Two Whispers-style booths tucked into a small kitchenette serve as a quiet respite from the hustle and bustle of the DUC.

Comfort of sleeping surface: Binary. Either you are down with sleeping in a booth or you are not. There is no try.

Privacy: Frosted glass and the out-of the way location mean this is one of the more secluded spots on the list.

Noise level: Generally down to a mild roar, unless the Washington University Political Review is having a meeting.

Perks: All the fun of a slightly downsized Whispers booth come fewer than 10 feet from a microwave and a full-sized fridge.

Quirks: Close proximity to the Student Life office means you can always pop over and say hello. (But don’t even think of napping there—the couch will most likely be occupied by someone watching Champions League Soccer while pretending to do work.) 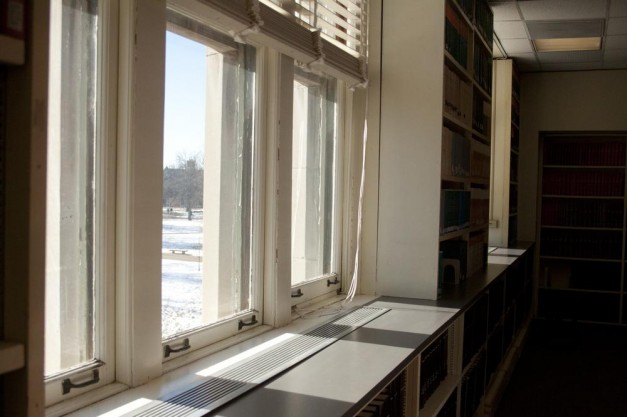 The windowsills are your best option, but if you’re trying to sleep here, you may have larger problems.

Comfort of sleeping surface: None. Sleeping on the radiator does mean it is a bit warmer, though. Not that we’ve ever tried or anything.

Privacy: You’re sleeping in a window. Not even the blinds will save you.

Perks: Located right next to the chemistry subject librarians, which is perfect for when you bolt upright from slumber with a question about the orgo final.

Quirks: If you’re having trouble falling asleep, there’s always volume 46 of the Journal of Mass Spectrometry. 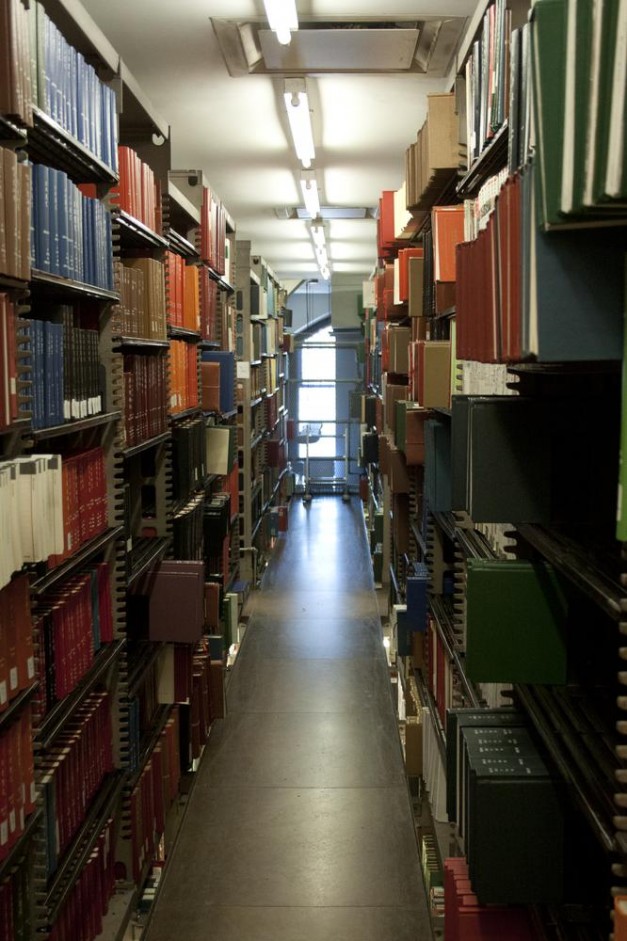 The holy grail of libraries, this is quite possibly the quietest place on campus. If you don’t mind a potentially very awkward situation arising from someone stepping on your face, the upper stacks are your oyster.

Comfort of sleeping surface: While the concrete floor may appear unforgiving, we could easily see someone setting up shop with a roll-up mattress pad or particularly thick blanket in the aisles between the shelves.

Privacy: Hard to tell, but the majority of the folks we saw were studying furiously on the main floor.

Perks: You probably won’t be tempted to distract yourself by picking up any of the books off the shelves, and the space is definitely warm and cozy.

Quirks: We spotted a tiny, padlocked door. This could be a bad omen.

Difficulty ranking: Not ranked. If you pull this off, we want to hear about it.