A review of Subway’s bread selection 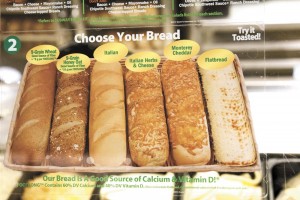 If the line out the door at lunchtime every day is any indication, we as a student body love Subway. With its extensive selection of sandwiches, there’s something for everyone, but sometimes all of the options—meat, toppings, sauce, bread—can be rather overwhelming. To help with one step in the ordering process, below is a review of the various bread choices that Subway offers. I tried all six toasted with the same fillings, which seem to go with any type of bread—turkey, provolone, tomato, lettuce and mayo, which may have prompted the Subway employees to think I have a much greater appreciation for turkey sandwiches than I really do.

Calories per 6” serving: 200
Italian bread not only has the lowest number of calories but is also the bread that will go with any type of sandwich. The bread has a soft texture with a slightly flaky outside and a neutral flavor. That is, it does not have a sweet taste or the addition of cheese and spices to make the bread stand out. If you are looking for a flavorful bread, Italian may not be the one for you, but if you want your sandwich fillings to stand out, Italian is the way to go.

Calories per 6” serving: 220
Texturally, the flatbread is the most distinct of Subway’s bread selection. Unlike the other breads, which are long rolls, flatbread is, as its name would suggest, flat, and also more dense. Its texture is soft and chewy, somewhat similar to that of pita. Its taste is largely neutral, but it has a hint of sweetness and flouriness that may conflict with some more savory or spicy flavors, like buffalo sauce.

Calories per 6” serving: 240
This bread has more of a distinct taste than the two above. The cheese, though subtle, nevertheless adds flavor to the white bread. The melted cheese also adds a bit of a crunch to the bread’s otherwise soft texture. It’s great if you’re a cheese lover seeking to make your sub even cheesier.

Calories per 6” serving: 250
Italian Herbs and Cheese was the most flavorful bread that I sampled. True to its name, it has a distinct herbal taste with a more subtle cheese flavor. The melted cheese, as in the Monterey Cheddar, adds a bit of crunch to the bread, which is otherwise soft. This bread is particularly great with Italian sandwiches but can add a bit of spice to any sub.

Calories per 6” serving: 210
While Italian is the most neutral bread, this one comes in a close second for being good for any sandwich. It does not have a distinct enough flavor to interfere with any fillings but does have the slightly sweet taste common to all wheat breads. Its texture is soft with little flakiness.

Calories per 6” serving: 260
This is the sweetest of all the breads. The honey is definitely evident in the bread’s flavor. It is a soft bread with flakes of oats on the outside. While it worked well with a turkey sandwich, I don’t expect it would complement too many other types of sandwiches. Perhaps ones such as teriyaki chicken that have sweeter flavors would complement the bread well, but I would shy away from using it for savory subs.