If your Funfetti with sprinkles could use a little boost of testosterone, you just may have to try this seemingly repugnant suggestion. Earlier this fall, when a male friend of mine turned 21, my roommate (and fellow baker) and I wanted to bake him something special to commemorate the occasion. We settled on a cupcake recipe that impressively manages to combine two of any college kid’s best friends into one pastry: beer and bacon.

The idea, which we found on the cooking blog “Brit + Co.,” was originally suggested as a Father’s Day treat. As disgustingly decadent as these cupcakes initially sounded, it turns out that substituting beer for oil (as the recipe calls for) actually reduces the fat content in cupcakes. The cupcakes themselves are pretty simple to make since they are basically just a doctored-up butter cake mix from a box. They bake at 350 degrees for 12 to 15 minutes.

The vanilla icing, too, is no great challenge. Since the booze in the cake itself bakes out in the oven, the frosting is the only part of the cupcake that retains a little alcohol, calling for ¼ cup of beer. You can use any type of beer, but I’d suggest an IPA for fuller flavor. Don’t be cheap; no Natty Light.

Once you have let the cupcakes cool off a bit, go ahead and ice the tops of them. Lacking a fancy icing piper in my apartment’s small kitchen, I cut off a corner of a plastic bag and piped the icing in concentric circles until a fluffy, white pile topped each of the cupcakes.

The only somewhat complicated and messy part of the recipe is the candied bacon that sprinkles the top of each iced cupcake. If you have ever seen the candy pizza episode of “Epic Meal Time,” you know what I’m talking about. To candy the bacon, place a layer of aluminum foil on a cookie sheet, arrange the 12 flat strips of raw bacon across the surface, and sprinkle brown sugar over the top of the strips. Then cook the bacon at 400 degrees for 15 to 20 minutes.

Once the bacon is done cooking and has cooled, chop it into smaller pieces (not too small, about 1-by-1/2-inch chunks) and nestle about four pieces per cupcake into the icing.

In the end, my finished product looked…kind of disgusting. But my friend was absolutely delighted to receive them and gulped down two on the spot in spite of his hangover from his first legal bingeing celebration the night before.

All in all, this recipe is simple enough to make and a real crowd pleaser. At least, guys seem to like it. 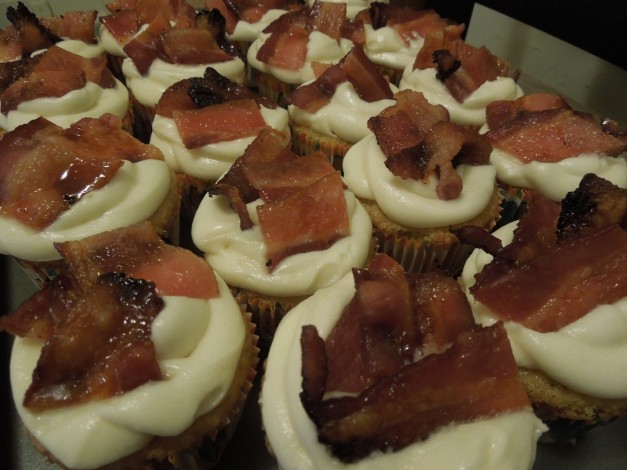