WUmbledore’s Army: A magical addition to the WU community 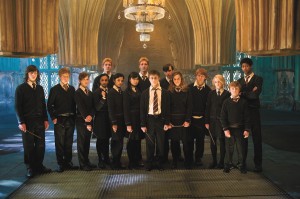 The Quidditch players scurry about the field, clutching broomsticks as they chase after the Quaffle, a volleyball. A few players run around, throwing Bludgers (rubber kickballs) at others to knock the Quaffle from their hands. Meanwhile, the Snitch, a person dressed in all yellow, runs sporadically around and outside of the field in an attempt to evade capture.

This form of muggle Quidditch, based on the fictional game depicted in the popular “Harry Potter” series, has yet to make a permanent mark on the Washington University community despite its popularity at other schools such as Webster University and Marquette University. This will soon change if sophomore Laura Desch has her way.

Desch is the founder of WUmbledore’s Army, a Harry Potter fan group that offers a unique way to bond with other students over a shared love of the bespectacled boy wizard. She created the group after taking part in Harry Potter Week, which the Congress of South 40 sponsored, in November 2010 and has already been contacted by the captain of Webster University’s Quidditch team for a possible match.

There is more to WUmbledore’s Army, though, beyond discussing all that is Harry Potter. The group is also an official chapter of the Harry Potter Alliance, a non-profit organization that works for human rights, equality and other world issues addressed and advocated in the Harry Potter canon.

“The Harry Potter Alliance is fighting for everyone. Values promoted in ‘Harry Potter’ need to be better promoted in the muggle world,” sophomore Cassandra Galluppi, a club officer, said.

The group has already taken action with the Alliance by participating in a campaign effort called Not in Harry’s Name. The campaign’s goal is to make Harry Potter chocolate Fair Trade and not reliant on child slavery. Members of WUmbledore’s Army were able to create a petition for the cause and send it to the distributor, Warner Brothers.

“The main idea [of the group] is taking ideas and what we love about the HP series and translating that to fundraising ideas,” Desch said. “We’re all good people. We want to do good in the world, and working with the HP Alliance was an easier way to communicate that.”

Such outreach ideas and efforts were some of the main reasons that freshman Archer Brock, the treasurer, joined the club.

“Having a Harry Potter club sounds silly and borderline nerdy, but it has evolved a lot into a community service thing, which I like. It’s something more substantial to bond over and something to aspire to,” Brock said. “You’ve gotten really familiar with the general idea and motives [of Harry Potter], and you can apply them to something you are less familiar with.”

The fun is not lost in the group’s pursuit of applying literary themes to social justice. Each group meeting tends to go over the allotted time period as members introduce themselves, say what Houses they are in, and play various Harry Potter-themed games. The members are very diverse, and sometimes the interest in Harry Potter is the only thing they have in common, according to Brock.

On Feb. 18, WUmbledore’s Army will be bringing the excitement that it experiences to the University community in the form of a Yule Ball, a semi-formal event. The location of the event will be announced by the group through their Facebook page and posters.

WUmbledore’s Army meets every Saturday from 1 to 2 p.m. in Shepley’s first-floor common room.