Stepping Out: The Dubliner

I knew we were approaching The Dubliner when I saw a huge Irish flag draped across a brick façade and an outdoor patio where patrons were downing pints of Guinness. The Dubliner is a gastropub, which, according to the Oxford English Dictionary (please excuse me, I’m an English major) means that it is “a public house which specializes in serving high-quality food.” While my experience at The Dubliner was quite enjoyable, I would hesitate to describe it as “high-quality.”

Walking through the door, I felt like I had stepped into a real Irish pub. There were Irish flags hanging from the ceiling, televisions showing a soccer game, the sound of an Irish jig playing softly in the background and, of course, a vast drink menu. The Dubliner is one of the few places in St. Louis where I’ve been able to find one of my favorite drinks, which I first tasted when I studied abroad in the United Kingdom: Magner’s, a hard Irish cider with the subtle sweetness of apples and the bitterness of tannins. The Dubliner offers plenty of other special drink options as well, including the Black Velvet (Guinness and champagne), the Irish Car Bomb (Guinness and Bailey’s), the Snake Bite (harp and cider) and Irish Coffee (coffee with whiskey, cream and sugar). 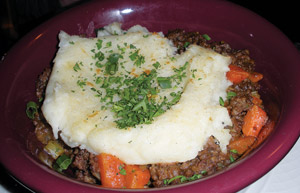 My friends and I were seated at a large dimly lit, not particularly comfortable booth. Our waitress was friendly and helpful, offering suggestions on what to order. She promptly brought out our appetizers, the Trinity and the stuffed mushroom caps. The Trinity consisted of plump shrimp wrapped in bacon and served on dollops of saffron vanilla butter sauce. The combination of items was good, and the sauce was rich and creamy. But I felt that the shrimp could have been fresher and the bacon crispier. According to the menu, the mushroom caps were supposed to be filled with crab, but I did not notice any crab in mine. Nonetheless, these were still tasty and topped with a flavorful, spicy sauce. My friend also ordered a side of “champ,” a combination of mashed potatoes with scallions, butter and milk. This dish proved that the Irish are real champs when it comes to mashed potatoes.

We waited and waited for our entrées to arrive. We waited so long, in fact, that our waitress apologized and explained that there was a party of 40 in a backroom. But his excuse wasn’t satisfying for me. For one, the rest of the restaurant was practically empty. Second, she knew it was my birthday, so I felt that better service was required for the occasion. 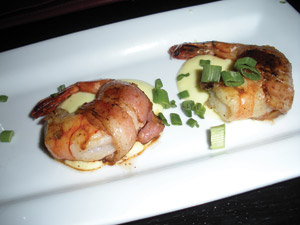 Finally, our entrees arrived. I went with the classic fish-and-chips option. The fish was huge, crispy and fried to perfection. The chips (french fries), on the other hand, were unimpressive, with a limp, sagging quality. While the entrée was tasty, it left me feeling a bit queasy and greasy; but I guess that comes with any large platter of fried food.

Meanwhile, my friends sampled several other entrées, including the shepherd’s pie, the chicken pot pie, the pumpkin ravioli and the chopped salad. The shepherd’s pie was a large steaming bowl of ground lamb and diced vegetables topped with mashed potatoes. The chicken pot pie consisted of a pastry topping, chicken and peas in a creamy sauce. While my friends were satisfied with these entrées, I thought the dishes were rather bland.

The pumpkin ravioli, on the other hand, was tossed in a rich, creamy sauce with subtle flavors of pumpkin spice. While this entrée was flavorful, the portion was very tiny. Finally, the chopped salad included mixed greens, roasted vegetables and goat cheese topped with balsamic vinaigrette. After puzzling over the other vegetables, we finally decided that they included sweet potatoes, parsnips and rutabagas. 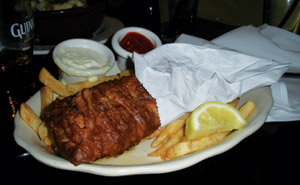 Then, our delicious desserts arrived. I tried the crème brûlée, which had a crisp, burnt-sugar topping and a creamy, cool vanilla bottom. My friends loved the Guinness bread pudding and the apple cobbler as well.

When the waitress gave me my bill she informed me that my dessert was on the house since it was my birthday. Though it was certainly a nice gesture, I would have preferred an Irish jig performed by the entire staff.