The mosaics of the Cathedral Basilica 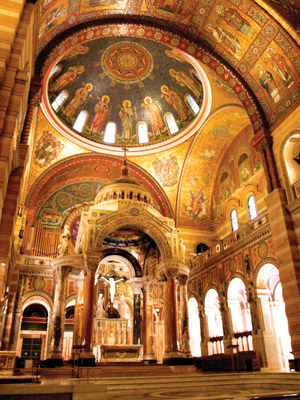 Not normally thought of when considering the art and architecture of St. Louis, the Cathedral Basilica is nevertheless one of the most impressive buildings in the area. Located along the eastern edge of the Central West End, the Saint Louis Cathedral, as it is more commonly named, is the seat of the Archdiocese of St. Louis. While the structure of the church itself is stunning—a pastiche of Gothic, Medieval and Renaissance architecture—the cathedral is best known for its amazing mosaic collection, thought to be one of the best on this side of the Atlantic.

Like many churches, the Saint Louis Cathedral is laid out in the formation of a crucifix, with the main entrance at the foot of the cross and the altar at the head. Mosaics cover almost every inch of the ceiling and many of the walls of the church’s interior. After walking through the main doors, one enters an antechamber covered in slightly gaudy gold mosaics. The scenes depicted are from the life of King Louis XIV of France, also known as Saint Louis, our city’s namesake.

Above the central seating area is the seal of the Archdiocese of St. Louis, nestled against a blue background. Circular in shape, the seal has many layers to it, creating an intricate design. On both sides of the main vault are smaller, more-personal chapels. One of the bethels is constructed out of white and black marble and lacks significant mosaics. The other, to the left of the seats, has extensive mosaics, which are reminiscent of the frescoes of Giotto, one of the progenitors of the Italian Renaissance. The two chapels are radically different, creating a juxtaposition between light and dark and ornamentation and simplicity.

The two beams of the cross, contained within the church’s superstructure, meet in the center of the cathedral and give way to a domed ceiling. Along the edges are mosaics of angels featuring Latin inscriptions above them, including the famous line from Matthew 28: “All power is given unto me in heaven and in earth.” The wings of the angels are colored differently, creating a vibrant contrast against the gold background. Obviously taken directly from the Bible and Christian mythology, these angels promote the divine link that the church provides between humans and God.

While most of the mosaics and designs within the cathedral can be considered magnificent, the “head” of the crucifix shape, which contains the altar space, is the pinnacle of the church. The baldachin, or canopy above the altar, is reminiscent of the one in St. Peter’s Basilica in Vatican City. The underside has a mosaic of a Star of David with a highly stylized rendering of “Deus” in the center. Both the size and the decoration of the altar remind viewers of the power and the divinity of the church and of its place in the divine order.

Above the baldachin, within the dome, are mosaics of the Twelve Apostles placed against a blue background and separated by vaulted windows. They look down upon the altar and the church’s congregation with expressions of serenity. They are centered above a marble statue of Christ just behind the altar, which looks outward with a paradoxical expression of agony and tranquility, indicative of his condition.

While the mosaics are the most notable feature of the church, one other piece should be mentioned. A bronze model of Michelangelo’s “Pieta” sits in an aisle to the right of the altar. The original “Pieta,” made out of marble, is located in Vatican City and is considered one of the finest examples of Renaissance sculpture in existence. This model does it justice and imitates the original almost perfectly.

The Saint Louis Cathedral is located just 10 minutes from the nearest Gold Line MetroBus stop, or a 10-15 minute drive from Washington University. The hours are extensive and the staff is highly receptive to visitors. For any art lover, it is a necessary trip.