Looking for something to do outside, now that the weather is nice? Sick of campus and Forest Park? Go check out the Missouri Botanical Gardens.

Nestled away southeast of Forest Park, the Missouri Botanical Gardens is one of St. Louis’ hidden gems. Founded in 1859, it is a registered National Historic Landmark and the oldest botanical garden in the United States.

The gardens consist of 79 acres of diverse plant life and are divided into numerous sub-sections, each with a distinct theme.

It is informally referred to as “Shaw’s Garden,” because Henry Shaw, a famous botanist and philanthropist, helped to found it. He built the Linnean house—named for Carl Linnaeus, the father of taxonomy and ecology—on the property. It is now the oldest uninterrupted operating conservatory in the country.

The highlight of the entire garden is the Climatron, a geodesic domed greenhouse that opened in 1960. The architectural aspects of the building itself are breathtaking; it is 70 feet high, 175 feet in diameter and consists of a metal lattice-like structure with strengthened glass panes. It is entirely self-supporting, as it does not require columns or other interior braces to stay stable. This allows a larger amount of light to stream into the dome, ideal for a greenhouse setting. 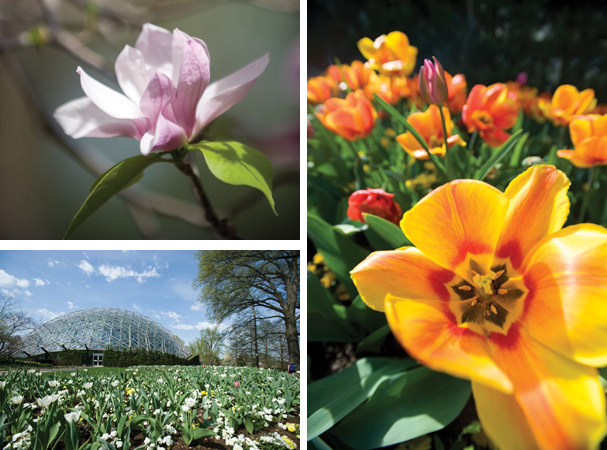 The interior of the dome is tropical and can range in temperature from comfortable to steaming, with high levels of humidity contributing to a sort of “wet air” feeling. The nature of plant life within the dome is tropical, too, from dense foliage to smatterings of delicate flowers. Within the dome, garden-goers will also find cascading waterfalls and a small hut and bridge from which much of the interior can be seen.

From the outside, the Climatron seems surreal and futuristic—out of place in a venue that emphasizes nature. Silent Running, a 1972 science fiction film, bases one of its spaceships off of the shape of the geodesic dome. Looking like a large metallic bug, it towers over its surroundings and seems to call for metal pincers to wave around.

The transition between the Climatron, an obviously man-made object, and the rest of the garden, an oasis of nature within a large city, happens abruptly. The distance between the main body of the garden and the dome’s exit is almost nonexistent. The remainder of the garden’s focus is not on tropical plants or architectural trappings, but rather on highly sculptured horticultural displays of disparate flora.

Less well-known than the Climatron, but also worth visiting, is the Japanese Garden, called “Seiwa-en.” Opening almost 20 years after the Climatron, Seiwa-en is the largest authentic Japanese strolling garden in America. Replete with quaint bridges, small streams, waterfalls and the typical gravel walkways, viewers can suspend their daily lives for a while and appreciate the natural beauty of the setting.

Strolling gardens are designed for the viewer to walk around and interact with the horticulture, rather than merely view it from a distance. As people walk down the pebble path in Seiwa-en, they can watch the garden unfold and sprawl around them. The gardens are meant to be seen in a specific order, and the walkway facilitates that. Visitors are guided around a pond, and stone lanterns are littered around the garden, providing quaint reminders of mankind hidden away amongst nature.

The Climatron and Seiwa-en are at opposite ends of the garden space, and much has to be traversed before arriving at either one of them. One worthwhile pit-stop is the Ottoman Garden. Modeled off of Turkish gardens, this section has a wide array of multi-colored tulips, fruits and other plants apparently found in a Turkish plot. As one of the newest gardens in the complex, the Ottoman Garden opened during the summer of 2006 and has proved popular ever since.

Regrettably, the Missouri Botanical Gardens are far outside the walking distance from Washington University. They can be accessed by the Metro, however, first by taking the MetroLink eastbound to the Central West End and then by switching to the South 59 bus. Travel time is approximately 40 minutes. It is much easier to access with a car, however, taking 10-15 minutes of easy driving. It is highly recommended that you check out these gardens, especially now that spring has arrived and the weather lends itself so easily to leisurely strolls among beautiful flowers.