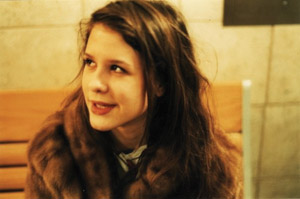 1. Where are you originally from and what is the best food you can get there?
I’m from Omaha, Nebraska, and am unabashedly proud of it. We’re pretty renowned for our beef, but my personal favorite is a toss-up between Ahmad’s, which is Persian cuisine, and this fantastic Ethiopian restaurant I just discovered that’s aptly named Ethiopian Restaurant.

2. What is your year and major?
I’m a junior specializing in the Language, Cognition and Culture track of PNP. And I’ll probably go for a French minor, too.

3. What’s the coolest class you have taken at Wash. U.? What did you like about it?
It’s a close call. I was pretty crazy about my Abnormal Psychology class because Professor Oltmanns is such a babe—in the most intellectual sense of the word—and is one of the most engaging and well-spoken professors I’ve had.

4. What is your favorite beverage, and where in St. Louis do you get it?
I’m a huge fan of Thai iced tea, and since I frequent Miss Saigon every couple weeks, I just get it there.

5. Do you have any pets? If so, what?
My two best friends and I applied to be foster parents for kittens, which basically requires that we take care of them for one or two weeks while they’re super tiny and adorable in order to socialize them and make sure that they don’t die.

6. What is the most ridiculous spur-of-the-moment decision you have made in the last year or so?
Deciding to make the six-hour drive from Nashville to Columbia to meet up with a friend who was touring as the sound tech for the one of the openers for Gogol Bordello, and ending up being serenaded by two Mexi-gypsies backstage.

7. What are you involved in on campus?
I book bands for the Gargoyle Committee, DJ a show on KWUR, and used to write for Eleven Magazine—but I also child-sit every now and again as part of the Night Off program, and am currently trying to get involved in the Burning Kumquat.

8. What exactly is the Gargoyle, and what are its goals?
The Gargoyle Committee is the group that operates Wash. U.’s student-run, on-campusmusic venue. Our goals are to bring great mid-range shows to St. Louis and to subsidize ticket prices so that they’re either free or no more than $5 for members of the Wash. U. community.

9. What have been your various responsibilities/positions with the Gargoyle?
The first two years I was on the Gargoyle, I was nothing more than a steadfastly devoted volunteer. I’d do all sorts of mundane tasks: cut out cardboard stencils so the older kids could spray-paint the office, haul garbage bags full of ice back to the green room, etcetera. It was only this past summer that I started booking for the Gargoyle.

10. How are the bands that come to the Gargoyle chosen?
Sometimes, an agency will e-mail us the availabilities of the artists they represent for a given season, and I can pick and choose which ones I want to make offers on. On other occasions, I can simply look up an artist that I know will be touring or that people have been requesting, and ask their agent whether they have any availability during the semester.

11. What is the basic rundown of how you go about attempting to book a band for the Gargoyle?
Before I can confirm a show at the venue, I need to make sure that the cost is within our means, that it’ll draw a good crowd, that the date doesn’t interfere too much with other events happening on the same night, etcetera. Booking a show requires a lot of back-and-forth between the agent and the Gargoyle. Once both parties have signed the contract, we’ve sealed that deal.

12. What is the most fun part of being on the Gargoyle Committee?
I think the best part of anyone’s job with the Gargoyle would have to be seeing all of our hard work pay off on the night of a show. I know how much some shows move me, so it’s kind of mind-boggling to know that we probably helped to create that experience for someone else.

13. What is one of the least fun parts of booking?
Like I said before, this job is far from glamorous. It’s a lot of e-mailing and pressing people to get things done, which takes up quite a bit of time.

14. What’s a funny story you remember a Gargoyle performer telling you?
When the president of the Gargoyle, [junior] Kristen Schlott, and I went out to greet the band Girls as they were pulling into the parking lot, we noticed uproarious laughter coming from inside the van. We didn’t think anything of it at the time, but they later told us that when we walked out, Christopher Owens, the lead singer, was like, “Wow, those girls are pretty cute.” Then, their peculiar little guitarist, Ryan Lynch, pointed to Kristen and goes, “That one looks like me!” It’s really only funny because it’s absolutely true.

15. Why should students come to Gargoyle shows?
I’d encourage people to come to Gargoyle shows because we bring in talented artists that put on great shows. Also, the concerts tend to be pretty intimate and fun, and the bands are usually stoked to be playing for enthusiastic college students.

16. Besides the Gargoyle, what is your favorite venue to take in a concert in St. Louis, and why?
My favorite place to go for a full-fledged concert experience would probably have to be Pop’s, which is out in Sauget (Ill.). It’s seedy, tacky, nestled in between three strip clubs, and is located in the midst of the most desolate, dangerous, industrial part of St. Louis, so you’re basically guaranteed an interesting night.

17. Who’s the craziest/ most bizarre, famous/ semi-famous musician you have ever hung out with?
[One time], my dad treated my sister and me with tickets to a concert (Motion City Soundtrack). Halfway through the show, we were pretty bored and chatting with some friends when this skeleton of a boy called us over to where he was sitting by the merchandise table. He introduced himself with a heavy Southern drawl as Trace. We ended up spending the majority of the night dancing with him and chatted with him at length after the show. The next morning when I woke up, my sister was poring over her computer, clearly amused. “Chloe, Chloe, do you remember that guy from last night, Trace?” “Ha, yeah, he was such a sweetheart.” “Did you know that he’s Trace Cyrus, Miley Cyrus’ brother and Billy Ray Cyrus’ son?” Needless to say, it’s always amusing for me to hear “Shake It” on the radio.

18. How would you describe your musical taste?
It’s trite to say, but I think it’s fairly eclectic. It changes and progresses with time. It’s probably most informative just to tell you what I’m listening to right now: I’ve got “The Best of The Pixies” in my car, Boards Of Canada’s “The Campfire Headphase” in my bedroom, a Motown compilation in the dining room, and a live album by The Sonics on the record player.

19. What shows are coming up that you are really excited about?
We have The Books scheduled to perform at the 560 Building on March 25 and Yeasayer scheduled for April 26, both of which will be fantastic shows. But, we’re still working on bringing a couple more in before the end of the semester, so keep your eyes peeled.

20. Do you have any hidden talents?
I have a really keen sense of smell. If the music industry and clinical psychology career don’t work out for me, I can always apprentice a perfumer in Paris.

21. What is your favorite fairy tale?
“The Legend of Sleepy Hollow,” both Washington Irving’s story and Disney’s cartoon rendition of it.