Engineers bring drag, catapults and glory to campus with EnWeek 2010 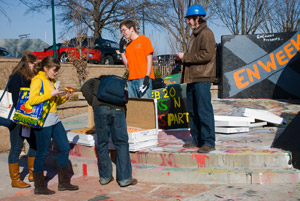 Engineering students begin last year’s EnWeek by selling donuts near the Underpass. EnCouncil annually puts on a series of weeklong events in order to raise awareness of the contributions of engineers in everyday life. This year there will be a Nerf Gun capture the flag game, a paper plane competition and a catapult competition. (Lily Schorr | Student Life)

Junior Caroline Fernandez is on a quest—a quest to bring one marginalized group of students to the forefront of the Washington University population. OK, so “marginalized” might be a bit dramatic, but this group is certainly subject to stereotypes and misconceptions. “Engineers are not just nerds,” Fernandez said. “Engineers do other things…We’re human, too!”

As Engineering Week (EnWeek) chair, Fernandez has been working with Alumni and Development, the Career Center, Student Union and several engineering student groups to make EnWeek 2010 the most successful one yet. The purpose of EnWeek is “to showcase what engineers do for anyone that may not truly know,” said senior Jeff Feiereisen, president of the Institute of Electrical and Electronics Engineers (IEEE).

Despite the fact that it is nationally recognized at other college campuses and in the professional world, Wash. U.’s EnWeek has struggled in the past, mostly due to lack of publicity. EnWeek was run primarily by EnCouncil, which failed to attract the attention of other engineers and non-engineering students.

This year, however, the School of Engineering has seen the return of the President’s Council, a group that includes the presidents of all of the different engineering societies on campus such as IEEE, Engineers Without Borders and the Society of Women Engineers. This increased communication has made EnWeek a more collaborative event that will hopefully promote campus-wide participation.

“I think the fact that [several] groups decided to come together instead of it being just an EnCouncil event is the most exciting part—seeing what a big group of people can do,” Fernandez said.

The week of Feb. 13-20 will be packed with activities such as a paper plane competition, Nerf Gun capture the flag and a “Super Smash Bros.” tournament fundraiser. Fernandez’s personal favorite is the Mr. Engineering Pageant, which will feature a student from each concentration (i.e., systems engineer, mechanical engineer, etc.) competing in pageantry events such as a talent show and, of course, an evening gown competition.

The events are designed to appeal to the Wash. U. community at large, not solely engineers. In collaboration with Washington Week, EnWeek will feature theme days such as Mardi Gras Day (Tuesday) and Orange T-shirt Day (Thursday) to promote spirit. Fernandez also explained that although engineering is known for being really technical, certain activities such as building a catapult are simple enough for anyone with a set of directions.

More complex, however, is the 13-foot metal trebuchet that is still in the works.

“We have all these classes where we learn all this stuff, but we never have these hands-on experiences,” Fernandez said of the motivation for building the structure. “We thought this would give us a good way to give students a hands-on experience to put on their résumés, and something to have fun with, too. [The trebuchet] is something that’s really, really cool, but it also requires people to use their minds.”

In response to the rumors that it is going to launch a school bus, Fernandez burst into laughter and explained that technically they could build it to do so, but for now, they’re planning on sticking to a piñata. Due to time constraints with regards to research and getting safety approval, the trebuchet unfortunately will not be launched until later in the semester. But Fernandez insists that when it arrives, this big event will promote not only the School of Engineering, but also Wash. U. as a whole.

To experience EnWeek and get excited for the upcoming trebuchet launch, check out some of the activities in the EnWeek schedule of events.