Getting sexually prepared for Mardi Gras 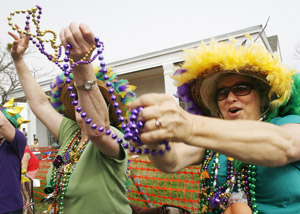 As most of you are probably aware, the famed festival of booze, beads and boobs (otherwise known as “Mardi Gras”) is upon us. Although Mardi Gras refers specifically to Fat Tuesday (occurring on Feb. 16 this year), to most revelers and college students, the main attraction is the weekend parade beforehand. This year, the parade will commence on Saturday in St. Louis’ historic Soulard neighborhood. This parade, although smaller in scope than the New Orleans parade, is known throughout the country as the second largest celebration for the holiday, drawing tens of thousands of carousing individuals—weather permitting. With said booze, beads and boobs, however, there is a historic sexual component to this parade. So much so that several organizations have started movements to promote safe sex at this cultural event.

While one source refers to a “green wave” of sexually transmitted infections moving through New Orleans and surrounding colleges after the festival (specifically Tulane University), others simply acknowledge the increase in sexual behavior and hookups following rampant genital flashing and excessive alcohol intake. As it is a festival celebrating revelry and merriment before the conservative Lent period leading up to Easter, the inversion of socially appropriate norms during Mardi Gras makes logical sense.

Although this study was conducted on a specific population confined to the streets of New Orleans, it has broader implications for worldwide Mardi Gras festivals, whether in St. Louis or all the way in Australia. For example, Family Planning New South Wales, in conjunction with the AIDS Council of New South Wales (Australia’s largest LGBT health and HIV/AIDS organization), has been running a “Prepare for Pleasure” campaign since 2009. The campaign seeks to encourage “hassle-free” pleasurable behaviors during Mardi Gras, distributing 40,000 condoms at various LGBT venues on Sydney’s streets. The festival in Sydney is known throughout the world as the “gay” Mardi Gras.

The history of STIs at St. Louis’ Mardi Gras remains more elusive. St. Louis is one of the nation’s 10 cities most commonly affected by gonorrhea, chlamydia and syphilis, however, and the significance of Mardi Gras cannot be discounted. Although no statistics are available indicating the number of people who have contracted STIs from encounters at Mardi Gras in St. Louis, hookups are reported to be generally in full swing, along with risky sexual behaviors that come from intoxication and the eroticism surrounding the event. Perhaps in the future, condoms will be distributed throughout Soulard, as in Australia. But for this year, as always, be prepared for the sexually charged climate raging around Ninth Street and the rest of downtown.