Faces of the future 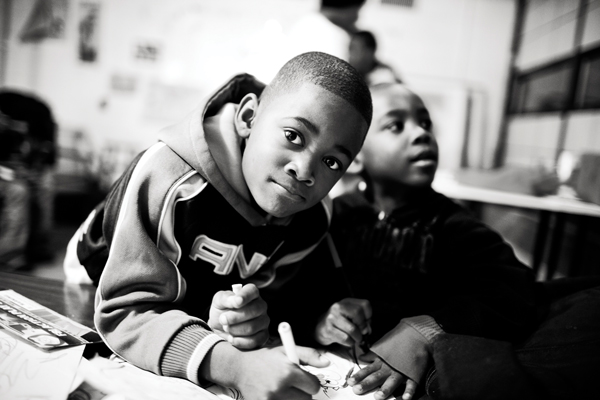 On Jan. 18, Washington University celebrated the life of Martin Luther King, Jr. with a ceremony in Graham Chapel that truly commemorated King’s legacy by bringing his spirit to life. This powerful event centered around the stirring remarks of Professor Robert Hansman, recipient of the Rosa L. Parks award for Meritorious Service to the Community.

Hansman asked the audience, “If nobody could talk, if they couldn’t explain to others what their values are, would we be able to tell through just their actions?” This question incited silent nods from nearly everyone in the chapel. Perhaps many of us are unable to show our values without speaking, but Hansman’s actions certainly speak for themselves.

Hansman founded City Faces in 1993 as a program designed to bring art to inner-city youth in the projects of downtown St. Louis. Hansman described the area as a “glorified dumpster,” overrun by gangs. “There were bodies laying behind dumpsters. In the first week, there was a murder on one of my kid’s front porches.”

Hansman’s initial goal for City Faces was to provide a safe haven from the violence in the neighborhood. “Mostly, I just wanted to get the kids out of that area,” he said. “But eventually I realized that there was a caring network there—a much stronger community than what I had growing up. But there was still violence. It was a weird combination.”

At first, Hansman struggled to be accepted in this community, but now is looked up to as a father by the program’s countless fatherless children. Hansman developed mutually caring relationships with dozens of the kids—two in particular: Jovan and Jermaine. At 17 years old, Jermaine died of sickle cell anemia, and his death shook the entire community. But it also brought everyone closer—especially Hansman and Jovan. Hansman spoke at the funeral and designed Jermaine’s headstone. While Jermaine’s death could have broken the program apart, the tragedy actually made it stronger than ever.

City Faces is now in its 17th year and continues to expand. “It’s so much more than art,” said Hansman. City Faces began as a drawing program with an open studio format, and provided an opportunity for local kids to escape street violence and grow through creativity.

In Hansman, the kids found a role model—someone who paid constructive attention to them and validated their good decisions. Hansman was someone to trust, to testify for them at court or go to their parole hearings. The program began to provide food and clothing for its participants. Hansman even brought in a piano for music lessons and offered tutoring and movie nights. “It was just a permanent place to escape to,” Hansman said. “Whatever that escape may be. The program is constantly growing with the kids and adapting to their needs.”

It was difficult for Hansman to transition between his life at Washington University and his life in the projects. “There are lots of people down there with great values and hopes, but no power,” he said. “[At the University] people have more power than they realize, but don’t do anything with it.”

Hansman has worked toward bringing these two worlds together for most of his life, and has gone to great lengths to do so. Just out of college, Hansman and several friends set up a table on the streets to support civil rights and hand out literature to passersby. Despite being threatened by members of the Ku Klux Klan, Hansman and his friends stood their ground. The party members, however, dragged Hansman to an alley and beat him within an inch of his life. That wasn’t the end of it. After Hansman was hospitalized and decided to press charges, the KKK blew up his lawyer’s office.

Years later, Hansman is still fighting for the rights of indivduals. Even faced with the obstacles, he has not been deterred and has courageously invested himself in City Faces and his adopted son, Jovan. “We both credit each other for the lives we have now,” said Hansman. “It’s a magical relationship and we are very much each others’ creation.” Jovan, now 29 years old, has taken over the City Faces project.

“We do not live in a post-racial world,” Hansman said. Despite the recent presidential election and the changes that have been made, “we are still very far from where we should be,” he said. “People just need to take a shot. We often make it harder than it really is to help.”

When Hansman brought his speech at the King ceremony to a close, every member of the audience simultaneously rose from their seats in silence, sending a chill through the Chapel. They clapped, cheered and many cried. Hansman was equally overwhelmed when Jovan and several City Faces children climbed onstage to embrace him after his remarks.

Yet the most rewarding moment of the night for Hansman occurred after the ceremony ended. A woman approached him and said, “You did it. I can’t walk out those doors and not do something now.” Judging by everyone’s tears and nods, the rest of the audience felt the same.