What does hip-hop have to do with increasing social awareness and alleviating hunger? A diverse group of Washington University students and campus groups will join together to answer this question during “Hip-Hop Against Hunger: A Week of Cultural and Social Awareness,” on Nov. 9-15.

Sophomore Celso White, senior John Huang and junior Monis Khan never expected that a simple discussion they had about hip-hop on campus last April would develop into such a large event. After the dissolution of Wash. U.’s chapter of Hip-Hop Congress, a club that promoted social and political awareness through hip-hop, the students sought to revive this form of dialogue on campus.

“A lot of people see hip-hop skewed by the media as talking about rapping and getting money. I really wanted to go back to the true essence of hip-hop that started back to when it was first developed,” Huang said. “It was…about political action and just expressing yourself through music, attitude, dance, artwork and everything.”

They came up with the idea to bring Rap Sessions, a travelling panel of prominent hip-hop scholars, to speak on the question “Is America Really Post-Racial?” at Wash. U.

“Their faces don’t pop out at people like Kanye West or Jay-Z…but these people are well respected in their fields,” White said.

In addition, White, Huang and Khan, who are separately involved in WuSlam, WuCypher and Drop Knowledge, thought of ways that their individual clubs could contribute to the event. With the goal of fostering cultural awareness and uniting people through hip-hop, the students reached out to a variety of organizations, including Eleven Magazine and Team 31.

“I thought this was a good opportunity for us to re-establish that umbrella organization for all the student groups on campus, especially because there’s been a lot of new hip-hop-oriented groups,” Huang said.

Beginning in September, weekly meetings were held to coordinate activities for Hip-Hop Against Hunger. As the students explained, each campus group involved follows hip-hop in its own way and thought up unique contributions for the week.

The diverse expressions of hip-hop can be seen in the final list of events, which includes an open-mic night, a dance workshop, a graffiti show, a freestyle competition, a fashion show and a bboy/bgirl dance-off. Hip-Hop Against Hunger will culminate in a hip-hop festival on Nov. 14, featuring The Paxtons, iLLphonics and RJD2. 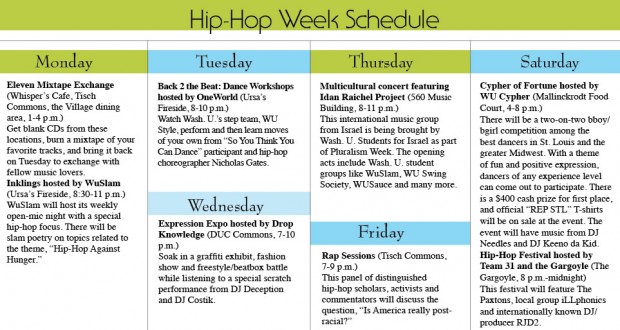 “We’re trying to go back and visit all the four elements of hip-hop: break dancing, DJ-ing, graffiti art and MC-ing,” Huang said.

While Hip-Hop Against Hunger will take place on the Wash. U. campus, the students want it to impact the greater St. Louis area. The events are open to everyone with the hope that others will join in on the celebration of hip-hop.

“A big thing that appeals to me about hip-hop is about the community, like how hip-hop can bring about camaraderie and just bring a group of people together under a united interest,” Huang said.

Hip-Hop Week will also give back to the local community through donations. All proceeds from the festival will go to Operation Food Search, a St. Louis food bank, and there will be donation bins for canned food at the events.

By involving the St. Louis community along with many campus groups, the founders of Hip-Hop Week hope that this event will occur annually.

“We just want to explain to everyone the essence of [hip-hop], where it came from, and how it’s going to blow up,” White said.